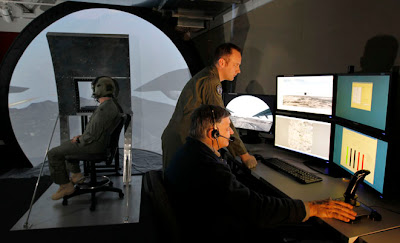 Australia's air force has installed a $1 million simulator for loadmasters on Lockheed Martin C-130 transports to help them learn how to identify threats.

The device simulates the view from the C-130's paradoor window in the rear cargo compartment, said the Royal Australian Air Force. It arrived at the service's Richmond base in New South Wales on 29 June.

"The loadmaster's primary role is to ensure the safety of all cargo and passengers transported on an aircraft, but they also perform a critical observer role while on operations," said Air Cdre Gary Martin, commander air lift group. "The pilots rely on the loadmaster as an extra set of eyes to detect any threats to the aircraft, or suspicious activity that needs to be avoided."

The RAAF noted that in the past training loadmasters in the observer role "relied on imagination and good briefing notes by instructors".

The simulator was purchased from the Canadian Commercial Corporation through commercial supplier Bluedrop Performance Learning. The system was originally developed for Canadian C-130 crews, and the RAAF purchased it off the shelf.

CAE Australia, which provides C-130 air crew training at RAAF Richmond, will use the new system to train personnel bound for deployments in the Middle East and Afghanistan.