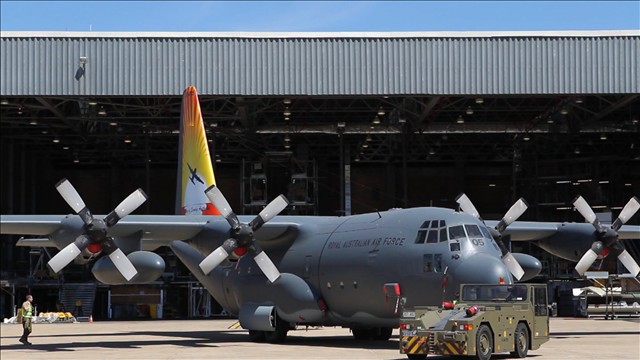 Minister for Defence Stephen Smith today farewelled the C-130H Hercules from Air Force service after an illustrious 34-year career at a ceremony at RAAF Base Richmond, Sydney.
Delivered in 1978, the C-130H Hercules has provided the Australian Defence Force with a highly effective capability, setting the standard for all Air Force transport aircraft which have followed.
Everyone who worked on the C-130H has cause to be proud of their efforts.  This aircraft has provided a tremendous service to Australia.
C-130H Hercules have played a critical role in supporting Defence personnel on operations in East Timor, Iraq and Afghanistan.
As well as its strengths in the battlefield, the C-130H has also provided an immeasurable service in peacetime.
The Australian public experienced the C-130H firsthand during the 1989 Airline Pilot’s Strike.  C‑130Hs also evacuated Australians from Cambodiain 1997, and brought injured Australians home from the Bali Bombings.
They have assisted the people of Indonesia, Papua New Guinea, and throughout the South Pacific during numerous humanitarian assistance and disaster relief missions.
The C-130H has airdropped hay to stranded cattle in countryAustralia, delivered supplies to our Antarctic Mission, and helped with the rescue of stranded sailors.
Air Force’s air mobility is currently in transition, as older aircraft types like the C-130H and Caribou are phased out and new capabilities, including 12 C-130Js, six new C-17 Globemaster IIIs and 10 C-27J Spartans are introduced to service.
The newer generation C-130Js will carry on the legacy of Air Force variants of the Hercules transport aircraft.
Four C-130Hs will be transferred to the Indonesian Air Force, allowing Indonesia to better support humanitarian operations. Two C-130Hs will be kept by Air Force, with one aircraft going to the Air Force Museum at RAAF Base Point Cook.  The other will be kept at RAAF Base Richmond for training purposes.
Disposal options for the remaining six aircraft are currently being investigated by Defence.