Following the delivery of the first four batteries of S-300 PMU2 surface to air missiles from Russia, Algeria has begun inducting the systems, partly replacing former S-125 (SA-3) systems. In the following satellite images taken recently by the Eros B spy satellite operated by the geospatial services company ImageSat International, two of the SA-3 sites are seen converted to serve the S-300.

In 2010 Algeria also has acquired the S-300 PMU2 from Russi as part of $7.5 billion arms package struck between the prime minister of Algeria and Russian president Vladimir Putin in 2006. Other elements of this arms package included Su-30 multirole fighters and modern submarines. The Air Defense command received the first unit in 2008; four units are currently delivered. The delivery of the remaining four is included under the original contract options. 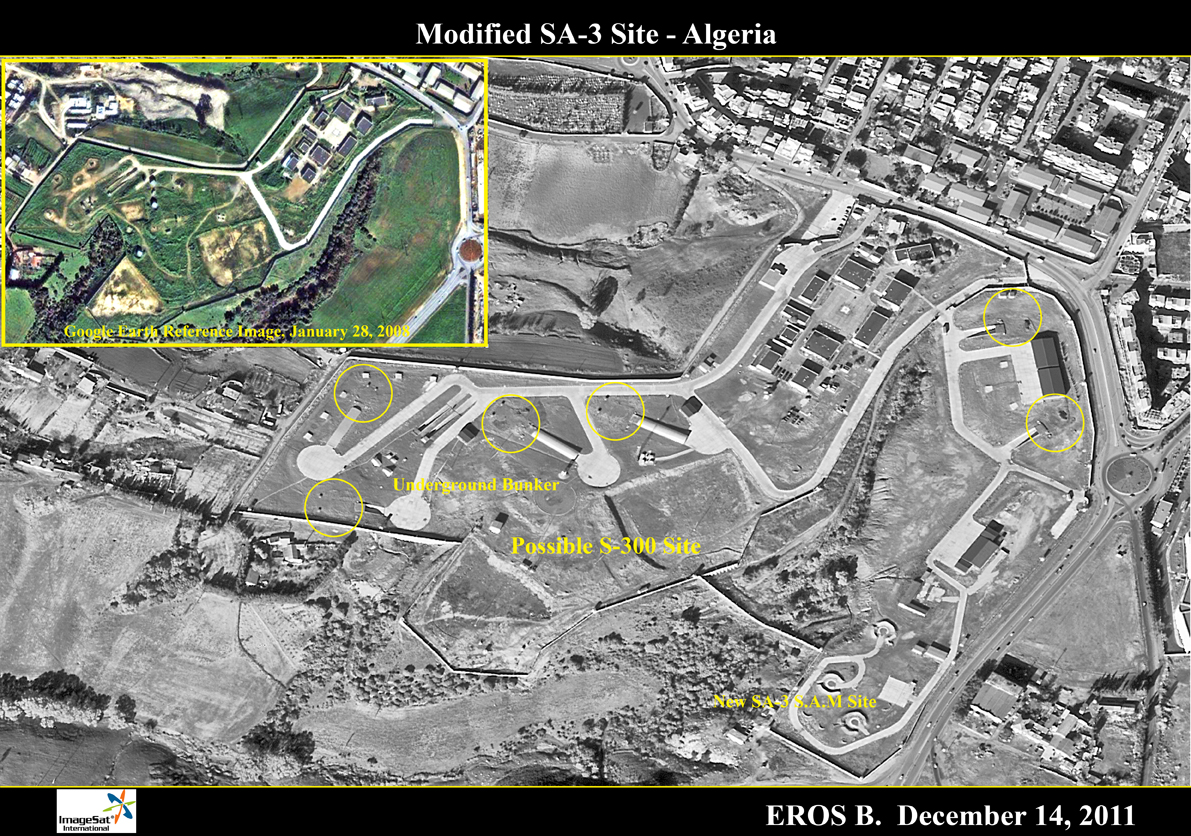 The SA-3 SAM site at Ouled Fayet has been upgraded into a S-300 PMU2 site in the past 3 years. The color image shows the SA-3 site as it was seen in 2007 while the larger image shows the completed upgraded infrastructure prepared to deploy the new S-300 PMU2. Photos: Google Earth and Imagesat International.

When compared to past images available on Google Earth, the scope of the Algerian preparations can be appreciated. These images show the Algerians spent significant efforts in upgrading and protecting their new sites, with infrastructure preparations previously unfamiliar with similar sites in other countries. The sites apparently being fortified with underground installations and overhead shields hiding each launcher position from aerial or space observation.

The four images that appears on the right shows how the empty SA-3 site at Reghaia, east of Algiers, as it was in 2007. The following images record its transformation into the modern, highly protected S-300 PMU2 site. The second image shows the same site as seen on August 2008, The third image shows the same site a year later, in August 2009 with another image taken two years later, by September 2011. This exclusive Eros B photo shown here shows the completed site, with the six bunkers protecting the launchers completely buried underground, along with sheltered exits, leading to adjacent lunch pads. All launch pads are interlinked, enabling rapid access and relocation of launchers. 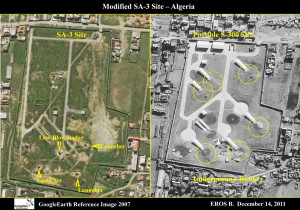 Another SA-3 site located west of Algires at the suburb of Ouled Fayet, has been upgraded into a S-300 PMU2 site in the past 3 years. The extent of the fortification works is visible in this Google Earth satellite view from April 2009, showing the erection of four concrete bunkers that were buried in the ground, with little visible signs on the massive buildings underground.

Training activity has also been identified at Boudouaou, few kilometers to the east. The image shows an S-300 PMU2 unit training with 64N6 Big-Bird and 30N6 Flap Lid radar systems deployed separately from the S-300 launchers. This feature is enabled by the radio-link, connecting the fire units to the radars and fire control, enabling more flexible dispersal of firing units and improved survivability for the entire site. In fact, a possible deployment technique would be to keep the radars apart from the site and move launchers out of shelters for firing, thus maintaining the majority of the unit protected underground. 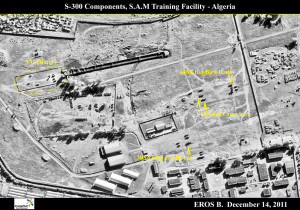 The sites retain the launch positions for other SAM assets, obviously some S-125 capablities. However, another possibility is that these positions could be occupied by the new SA-22 (Pantsir 1), protecting the bunkers from attacks by precision guided weapons.

In May 2010 Algeria and Russia concluded another contract for the delivery of 22 SA-22 Pantsir-S mobile air defense systems. The system has already been delivered to Syria and the UAE. The Pantsir-S unit combines 12 surface-to-air guided missiles with two 30mm air defense automatic guns. Pantsir-S is an autonomous, tracked low-level, mobile air-defense system that can protect mobile forces or augment the defense of strategic sites and medium-long range SAM sites with low-to-medium altitude air defense. The weapon is considered effective against guided weapons as well as unmanned aerial vehicles (UAV).