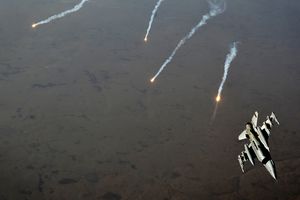 Speaking to Shephard at the Singapore Airshow, ITT Exelis said an agreement with the air force had now been 'definitised' after almost two years of development. Officials blamed the prolonged timelines on bureaucratic issues.

Pakistan signed a $54 million contract with ITT Exelis for 18 AIDEWS and 20 pod shells. The air force already possesses ADEWS- the externally carried version of the sensor- which is carried on board F-16 aircraft. The AIDEWS will also be used to upgrade older F-16s in Pakistan's fleet.

'This allows you to take a box off an old F-16 and carry over to a new F-16,' a company source said while describing the interoperability of the system.

Meanwhile, the company is targeting other F-16 programmes around the world, including Taiwan, which is understood to be considering upgrades to its fleet of aircraft. Specifically, Taiwan is considering low and high band electronic countermeasures designed to deal with radar guided threats. Other F-16 operators including Chile, Poland, Turkey and Oman.

In addition, ITT Exelis has upgraded software for AIDEWS with the Block 5.2 variant following recommendations from customers. More specifically, Oman, Chile and Poland have asked for improvements in how the system handles electronically scanned antennas.

Commenting on the electronic warfare market in South-East Asia, ITT Exelis said the 'whole region was realigning itself to new and potential threats'.

'The EW market is being carried along with those changing situations. As region begins to change, Asia-Pacific has become an important growth market both in EW and across our entire portfolio.'