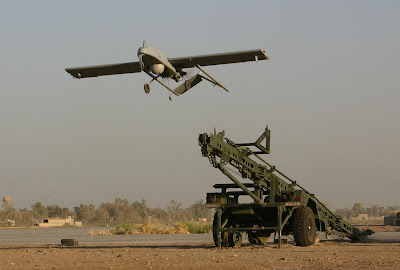 The catapult-launched Shadow 200 is a tactical unmanned aerial vehicle that will provide day and night surveillance. Its purchase, part of a $1.1 billion package of protection measures, was first announced by former defence minister John Faulkner last year.

The first UAV system, which comprises as many as six drone aircraft, is expected to be deployed by the end of the year, a defence spokesman told The Weekend Australian.

It will replace the smaller, less capable Scan Eagle UAV leased under an earlier deal with US aircraft maker Boeing.

"The Australian government is acquiring two Shadow 200 systems from the US army via a Foreign Military Sales Agreement," the spokesman said.
It is understood the Australian Defence Force will take early delivery of its first Shadow 200 System within months, 18 months ahead of the FMA schedule.

The early delivery of a second system has been made possible by the US army giving up one of its production-line slots.

The propeller-driven Shadow is launched from a trailer-mounted catapult but lands conventionally on a tricycle undercarriage and is retrieved using an arrester wire.

It is powered by a 38hp engine and has a range in excess of 100km and eight-hour endurance.

Mr Clare was at Amberley yesterday to receive three new F/A-18F Super Hornets, which brings to 18 the total number of aircraft now operated by the Royal Australian Air Force.

Six more aircraft will be delivered by the end of the year.

The Super Hornets will ensure that Australia's air combat capability is maintained until the full introduction into service of the Joint Strike Fighter.