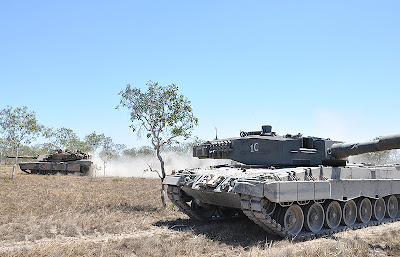 
The Singapore and Australian armies conducted a bilateral armour exercise, Exercise Matilda, at the Mount Bundey Training Area (MBTA) in Darwin, Australia. Held from 28 August to 16 September 2011, Exercise Matilda 2011 involved 100 personnel from the 48th Battalion, Singapore Armoured Regiment (48 SAR) who conducted bilateral training with their Australian Defence Force (ADF) counterparts from the 1st Armoured Regiment. During the exercise, both sides conducted a series of tactical missions together and exchanged information on Main Battle Tank (MBT) operations and tactics. The exercise culminated today in manoeuvre training involving the MBTs of both armies.

Highlighting the value of Exercise Matilda, Lieutenant Colonel Lim Kah Keng, Commanding Officer of 48 SAR, said, "Exercise Matilda 2011 is important because it provides an opportunity for the SAF armour to operate alongside the ADF in vast manoeuvre space and challenging live firing conditions to hone gunnery competencies. The exercise also allows soldiers from both armies to interact and learn from each other."

The exercise is a testament to the close and long-standing defence relations between Singapore and Australia. The SAF and the ADF interact extensively through multilateral training exercises, visits, professional exchanges, and military courses, and work together in close partnership in the multinational reconstruction efforts in Afghanistan.