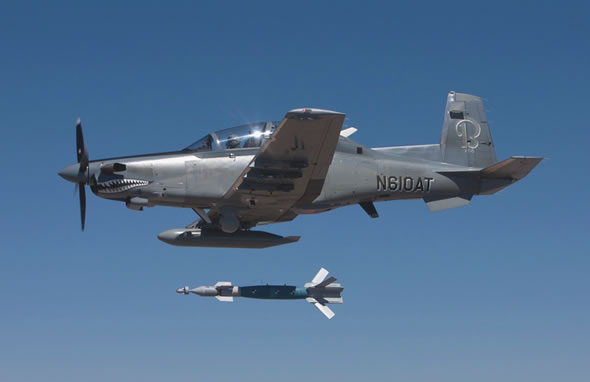 Under the U.S. Air National Guard evaluation of a future Light Attack and Armed Reconnaissance (LAAR) to be operated by the U.S. and Afghan air forces, the Air Force is seeking a low cost, light fighter capable of flying at altitudes up to 30,000 ft. above sea level, with a range up to 900 nautical miles, and mission endurance of six hours.

LAAR is positioned as an affordable, advanced training, light attack and armed reconnaissance aircraft that could meet the U.S. government plans to equip under-developed governments with effective aerial recce and attack capabilities necessary for combatting insurgency and drug trafficking. While providing effective, precision attack and real-time recce, the aircraft should affordable to own and operate and be able to operate from austere fields. Deliveries of such aircraft would often be considered as ‘training aircraft’, while combat operations could be flown by local trainees or,when necessary, by their foreign ‘trainers’, assisting government counter-insurgency operations. 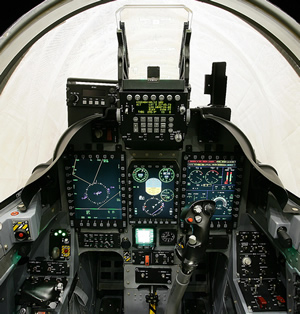 As part of these evaluations the Brazilian Embraer A-29 Super Tucano and Hawker Beechcraft Defense Company (HBDC) AT-6 are undergoing weapon qualification and operational evaluation Currently undergoing operational assessment by the Air National Guard/Air Force Reserve Test Center (AATC), toward a final selection next month. Embraer has prepared its position in the U.S. by teaming with the California based Sierra Nevada company and establishing a production and support facility for its aircraft in Florida. 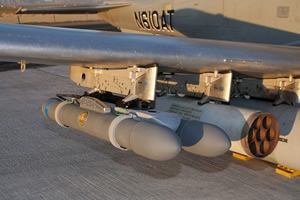 Two Griffin missiles attached to the AT-6 underwing pylon. The aircraft is scheduled to test fly with the griffins in the coming weeks. Photo: Hawker beechcraft

The aircraft also performed air-to-air gunnery, employing .5 Cal machine-guns, assisted by integrated lead computing  gun  sight. This capability could be of value for the Air Sovereignty Alert (ASA), which the U.S. Air National Guard performs defending U.S. airspace. Similar mission, currently flown by F-16s, could be performed by gun and missile-armed AT-6s. Hawker Beechcraft is offering the National Guard a version of AT-6 equipped with a glass cockpit based on the A-10C modernized Warthog. To further demonstrate this role the AT-6 will conduct a live-fire tests with the AIM-9X Sidewinder air-to-air missile in 2012.

Raytheon Company is seeking to integrate its 12 pound Small Tactical Munition (STM) onto a wide variety of light-attack aircraft. Two of these 22 inch long missiles are stacked in a canister carried by manned or unmanned aircraft. STM is the smallest air-launched weapon in Raytheon’s portfolio. According to Bob Francois, vice president of Advanced Missiles and Unmanned Systems for Raytheon Missile Systems, the small size of this new missile enables the warfighter to carry dozens of STMs on a multitude of light attack aircraft. “Instead of using an expensive system to destroy a target such as a lightly armored vehicle, the warfighter could use an STM, which costs roughly the same as a pickup truck and reduces collateral damage.” The STM weapon uses foldable fins and wings, it incorporates a purpose-built warhead designed by Nammo-Talley and features a Kaman Aerospace electronic safe arm and fire device. The weapon is employed from the U.S. military’s common launch tube. 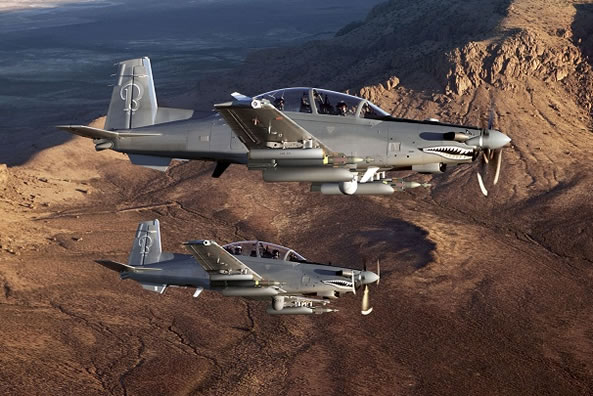