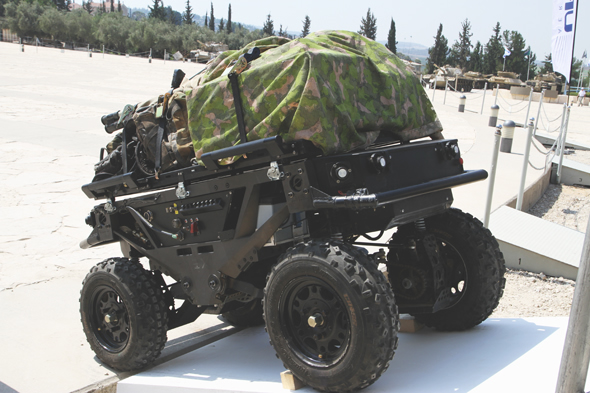 Called the Rex, the platform employs a simplified method to recognize the path of its leading soldier, following the team's path with high accuracy using virtual "bread crumbs" the leading soldier leaves behind him.

Rex's dimensions and shape were determined to enable the robot efficient integration with common infantry tasks, such as entry into a building or jumping from helicopters.

Currently in final integration phases at IAI's robotics department, part of the LAHAV division, Rex has been presented to potential customers.

IAI said Rex, designed to carry troop supplies, was first unveiled in South Korea in 2009 but since then the unit has been made smaller.

Rex, powered by a piston engine, weighing about 330 pounds and can carry a 550-pound load. It also carries enough fuel to move more than 61 miles.

IAI said the robot follows simple commands similar to those used in dog training. The operator can instruct the robot to stay or move behind the force at a certain distance or close in. He can also transfer control to another team member at a press of a button.

The vehicle uses ultrasonic sensors to move forward, keeping clearing off obstacles along its way. Its movement path is determined by electronic "bread crumbs" automatically placed by the advancing infantry along the way. Multiple sensors are used to determine the vehicle's position relative to the supported team, both in open area, urban terrain or in Global Positioning Systems-denied conditions.

In situations where a vehicle should move on a different path, it can be driven by tele-operated by remote control unit.