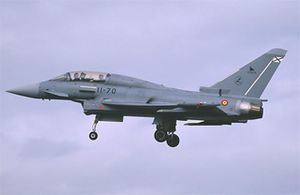 Spain's government has tendered a proposal to its Peruvian counterpart covering the possible sale of 18 Tranche 1 Eurofighter combat aircraft currently in service with its air force.

Reportedly valued at €45 million ($61 million) per aircraft, the proposal was submitted at the request of the Peruvian defence ministry. If negotiations go forward, the intention would be to transfer all of the fighters to Peru within one year of a contract signature. The airframes have flown an average of around 600h each, sources suggest.

Faced with a looming shortfall in its air defence capabilities, the Peruvian air force has placed requests for information for the Eurofighter Typhoon, as well as for the Boeing F/A-18E/F Super Hornet, Dassault Rafale, RAC MiG-35, Saab Gripen NG and Sukhoi Su-30/35.

Spanish prime minister Mariano Rajoy visited Peru in mid-January, when the nation's proposal was formally submitted, although it is understood that it has been under discussion since November 2012.

Peru's 12 Dassault Mirage 2000P/DP fighters are the subject of a lengthy in-country overhaul, valued at $140 million. Nine aircraft have been returned to airworthy condition, but another $480 million would be needed to modernise the fleet to the enhanced Mirage 2000-5 standard.

A MiG-29 upgrade launched in late 2008 has experienced repeated delays, with eight so far modified for $106 million. Completing work on the other 11 will cost another $400 million.

Both types would be unlikely to remain in use beyond 2025, according to local media reports, which also suggest that just four of the nation's 18 Su-25 ground-attack aircraft are currently operational.