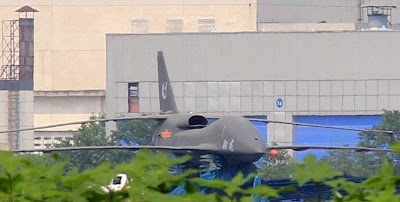 The existing of the Chinese UAV (Unmanned Aerial Vehicled ) "Global Hawk" is nothing new as it has been featured in various defence shows. However, until today there has been no confirmation to suggest that the PLAAF is adopting this high-altitude UAV, but a recent picture take in Xianglong, Chinese Air Force base, suggests that the "Global Hawk" is now in service.

Guizhou Aviation Group (GAV) had announced in November 2009 that the maiden flight of the Xianglong UAV has been successfully conducted. The maiden flight took place at the Anshun airport and lasted 18 minutes.
Xianglong, or the Chinese HQ-4 Global Hawk, is a joint venture between the Guizhou Aviation Group and the Chengdu Aircraft Design Institute (CADI). It was first unveiled at the 2006 Zhuhai air show and completed its high-speed taxing tests in 2008. The fuselage, vertical and power plant of the Xianglong was designed by the GAV and the job of testing, manufacture and final assembly was handled by the CADI.
(Army Recognition)
Partager cet article