The German Navy – The Way Forward? 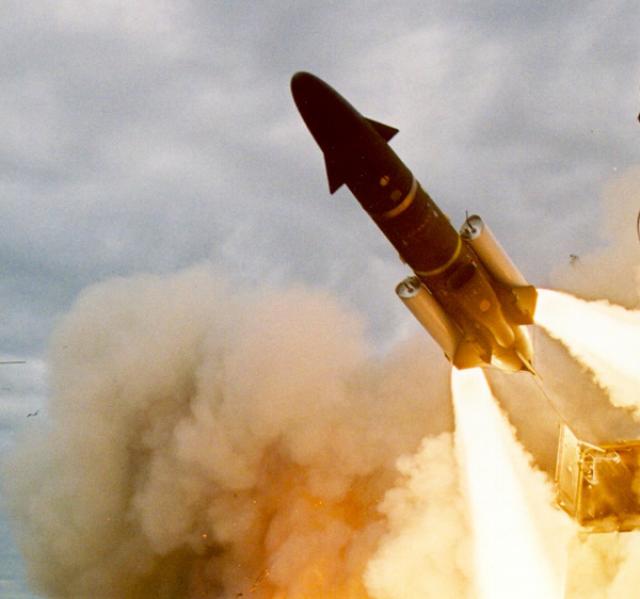 One of the largest fleets in NATO, the German Navy appears to have escaped most of the recent cuts imposed by the government’s austerity plan, since construction of the new vessels and upgrades for existing platforms seems to continue. However, the planned reduction of 60 percent in its defense budget could have negative effect in the future, if the government decides to press on with the cuts. To continue operating under these restricted budgetary constraints the Navy may have to reduce its mission sets, whilst assuming a reduced ‘asymmetric’ role focused on counter-piracy, peacemaking and peacekeeping operations, rather than full scale, high intensity operations.

In addition to taking part in current NATO activities the German Navy deploys routinely at the Baltic Sea and is taking part in many international operations, including peacekeeping operations, security and counter piracy activities, as far as Africa and the Indian Ocean. In total, there are about 90 commissioned warships in the German Navy including 43 auxiliary ships; the total displacement of the navy is 220,000 tons. In addition to this, the German Navy and the Royal Danish Navy are in cooperation in the “Ark Project”. This agreement made the Ark Project responsible for the strategic sealift of German armed forces where the full-time charter of three roll-on-roll-off cargo and troop ships are ready for deployments. In addition, these ships are also kept available for the use of the other European NATO countries. The three vessels have a combined displacement of 60,000 tons. Including these ships, the total ships’ displacement available to the Deutsche Marine is 280,000 tons.

The German Navy operates two flotillas, the surface fleet which includes 15 frigates of three types and Type 212 subs, with a squadron of ten fast missile boats operating in the Baltic sea. In recent years the German Navy went through major modernization, with the fielding of the F-124 class frigates, K130 corvettes and Type 212 submarines, all locally built by the Blohm & Voss, Lürssen, ThyssenKrupp Marine Systems (TKMS) and Howaldtswerke Deutschland Werct (HDW) shipyards.

The seeming stability does not reflect years of decline in new orders, which almost brought the HDW submarine builder to a standstill and drove TKMS to sell most of its naval and commercial surface shipbuilding assets to the UAE in 2009. The company agreed to establish a “close strategic partnership” and Memorandum of Understanding with the Abu Dhabi MAR (ADM) group in the United Arab Emirates. The proposed sale followed related purchases in Germany by Abu Dhabi MAR, and other recent shipyard sales by TKMS. The net effect was a restructuring of Germany’s naval shipbuilding industry.

The envisioned agreement involved a 50/50 joint venture to build naval surface ships, with TKMS retaining a lead role and know-how in all projects with the German Navy and NATO partners, while ADM was responsible for the Middle East and North Africa. At the same time, however, Abu Dhabi MAR would acquiring 80% of TKMS’ key surface ship firms: Blohm and Voss Shipyards, Blohm and Voss Repair, and Blohm and Voss Industries. That deal has largely fallen through in 2011, leaving TKMS naval assets “in play” again.

Today, the German Navy maintains two operates 15 frigates of three types – the Bremen (8), Brandenburg (4) and Sachsen class (3), which is also the newest (F124 class) air defense frigates. In November 2011 Germany laid the keel of the first of four F125 next generation frigates ‘stealth design’, likely to be one of the world’s largest class of frigates with a displacement in excess of 7,200 tonnes, expected to enter service in 2016 in time to replace the first Bremen class frigates. Although the crew is to be reduced to 120 sailors, instead of the planned 235 crew, the vessels will operate with the “two crew concept”, as the vessel is capable of long endurance at sea. Completion of the F125 fleet is anticipated by December 2018.

There are three ongoing naval construction programs: Type 212 submarines (two of a total six boats on order are yet to be delivered), four F125 frigates, the keel of the first one was laid this month, and three K130 corvettes yet to be delivered. 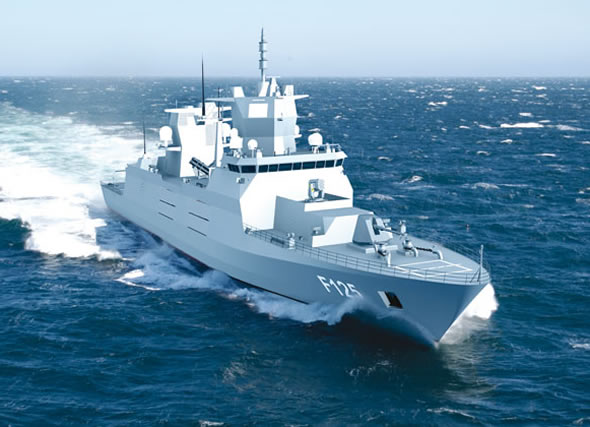 The first of four F125 class frigates is scheduled for delivery by 2016. Photo: TKMS

While all shipbuilding programs are exclusive to Germany, the weapon systems, parts of the radar and other electronics subsystems are being developed as part of international cooperations, to reduce development cost.

The F125 program will deliver four ships between 2014 and 2018. The program focuses on long endurance vessel optimized for asymmetric warfare and peacetime operation far from its home port. As such, the 5,500 ton vessel will have a crew of up to 120 personnel, about half of the crew that were required to operate previous generation frigates. The vessel will also be able to support special forces teams of 50 personnel.

The navy is in the process of inducting the first two of five new Braunschweig Class K130 corvettes, based on the MEKO A design, with three more under construction. These corvettes are supplementing the squadron of fast missile boats and will better support typical operations assumed by the German Navy, including anti-piracy support. K130 is also designed for a lean crew, operated by a complement of 65. These corvettes represent a mix of systems and technologies from different European and Scandinavian makers – the radar is made by EADS in Germany, as well as the ESM and countermeasure systems. The command, control, communications and optronic fire control systems comes from Thales Netherlands; the 76/62mm gun is an Italian system from Oto-Melara while the main weapon system is the Swedish RBS15 Mk3. The later is a surface launched fire-and-forget long range anti-ship and land attack missile, developed by the Saab Group. To gain economy of scale and share the program’s life cycle cost, Germany, Poland and Sweden have decided to collaborate and equip their new vessels with the new missile. Marketed jointly by Diehl and Saab, RBS-15 Mk3 is being offered as a future armament of its frigates and potential replacement of earlier Exocet and Harpoon missiles.

The german Navy will operate five K130 Braunschweig class corvettes. The vessel in the photo is the fourth ship, F263 Oldenburg. Photo: TKMS.

A squadron of ten Gepard class Fast Missile Boats, equipped with MM38 Exocet anti-ship missiles is also operational, but the number of boats has being reduced gradually. Under the 2010 announced budget cuts, the Navy will retire its Gepard class fast missile boats. The first vessels, Nerz and Dachs will be retired by March 2012. Other Type 143A boats retained as operational performed training in the Baltic Sea in November 2011. 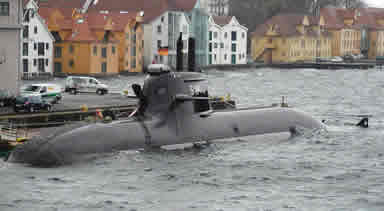 Until recently the German Navy operated a flotilla of ten submarines, based at Eckernförde. Up to 2010 the German submarine fleet consisted of modernized Type 206A diesel-electric submarines, which were originally commissioned between 1973 and 1975, and upgraded since 1992, and four new hybrid diesel-electric/fuel cell air independent propulsion (AIP) Type 212A submarines, which were commissioned between 2004 and 2006. In 2010 the remaining Type 206A subs were retired from active service as part of the Bundeswehr budget cuts. Current plans foresee a total of six Type 212A boats, with the final two vessels projected to become operational by 2012 and 2013 respectively. The original plan was to construct a total of eight Type 212 vessels, but in January 2004 the German Defense Ministry announced that no more submarines would be ordered until 2016.

Germany possesses a manufacturing capability at HDW for a diesel-electric special export-only submarine, the type 800 Dolphin class and has exported numerous variants of these, Turkey and Israel being amongst its customers. This is perceived as a very capable conventional submarine, with various shipyards offering upgrades.

The German Navy’s main roles, in conjunction with other NATO navies or as part of a UN force, are conflict prevention, crisis management, peacekeeping and counter-terrorism operations. As a result of the 212A submarine’s stealth capabilities, it is also able to carry out effective covert intelligence and reconnaissance missions. German submarines were deployed as part of peacekeeping operations in the Adriatic Sea during the mid-1990s, and as part of NATO operation “Active Endeavour” and support to the US-led conflict in Afghanistan “Enduring Freedom”.

In support of new operational priorities, there are future plans to equip the 212A with a land-attack capability. The Interactive Defense and Attack System for Submarines (IDAS), currently under development by Diehl BGT Defence, HDW and Kongsberg of Norway, uses a wire-guided missile to engage helicopters and mobile targets on shore. The third Type 212 submarine, U33 was selected as the platform for testing the new weapon. The missile made the first flight in June 2008, successfully launched from the torpedo tubes of the submerged submarine.

The German Navy operates five Type 352 minesweepers equipped with hull mounted DSQS-11 mine detection sonar and the ‘Troika Plus’ system, comprising a manned mothership and unmanned Seahound (seal) vessels being the lead element. Some of the older Type 333 (converted fast gun boats) are currently being retired.