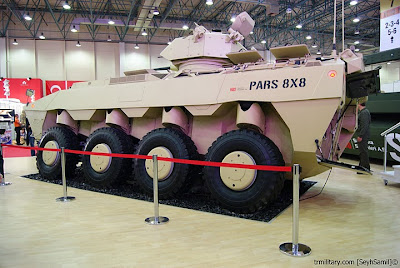 ISTANBUL – Turkey’s flourishing armored vehicle makers increasingly are investing in the development and production of eight- and six-wheel-drive tactical vehicles, mainly for export.

“The Turkish armed forces are not scheduled to buy eight-by-eight vehicles anytime soon, but there’s a huge interest by the world militaries to buy such vehicles,” said Serdar Gorguc, general manager of vehicle maker Otokar. “So that’s why we have developed our Arma vehicle.” Gorguc spoke in early May, when Otokar unveiled its amphibious eight-wheel-drive Arma.

The Turkish military’s potential purchase of a large number of six-wheel-drive tactical armored vehicles has been on hold since last year, but this has not deterred local vehicle firms from pursuing development. At least three Turkish vehicle makers have begun developing and making six-wheel-drive vehicles.

Otokar has already produced a six-wheel version of the Arma. The company signed a $10 million contract to sell 13 of these to a Middle Eastern country, which Otokar officials declined to name. The 13 vehicles represented different models of the six-wheel Arma designed for varied missions, and if they operate successfully, the company expects to export 100 more vehicles to that country.

The eight-wheel-drive Arma was exhibited for the first time at the International Defense Industry Fair (IDEF) 2011 here May 10-13. Both Arma versions will compete with rivals for contracts in at least two countries over the next couple of months, company officials said.

“The Arma is a modular system, so once you have the six-by-six vehicle, you can easily design the eight-by-eight version with some few additions,” Gorguc said.

Otokar, based at Adapazari and owned by Turkey’s top business conglomerate, Koc Holding, makes seven armored vehicles. Its sales, civilian and military, were about $340 million in 2010.

Company officials said the Arma has a high degree of ballistic and mine protection, thanks to its high steel hull. But Otokar’s signature product is the Cobra, a four-wheel-drive tactical armored vehicle exported to nearly 10 countries in the Balkans, the Middle East and Southeast Asia since the mid-1990s.

Otokar also is the Turkish prime contractor for a multibillion-dollar program for the design, development and manufacturing of Turkey’s first domestically produced main battle tank, the Altay.

Under a $500 million contract, Otokar and its partners will deliver four prototypes for the new-generation tank by 2015. Otokar is obtaining technology transfer from South Korea’s Hyundai Rotem, which produced South Korea’s K1 and K2 main battle tanks. Serial production of the Altay is expected to start after 2015. Otokar exhibited a mockup at IDEF 2011.

In terms of exports, Turkey’s most successful vehicle maker is FNSS, a joint venture between Turkey’s Nurol Machinery and Industry and the U.S.-based BAE Systems Land and Armaments. Nurol holds the majority stake.

The land warfare sector accounts for Turkey’s largest defense export deal: a $600 million sale of 257 Pars eight-wheel-drive armored personnel carriers and combat vehicles from FNSS to Malaysia, signed in February. The vehicles will be co-produced with Malaysian partners.

FNSS is discussing another sale of the Pars to Indonesia. The company also is near a deal with the arms company Al Jaber in the United Arab Emirates, FNSS officials said. FNSS and Al Jaber are expected to jointly build the Pars vehicles in the emirates.

Building on the success of the Pars eight-wheel, FNSS has developed a six-wheeled version that it hopes to export. FNSS displayed the six-wheel Pars at IDEF.

“The international success of the Pars proves that a Turkish vehicle maker can be very successful even without selling its products to the Turkish Army,” an FNSS official said. “There is and there will be a huge interest in the world militaries for the six-by-six and eight-by-eight vehicles.”

Nurol Machinery and Industry also has its own independent wheeled armored vehicle company, which produces the six-wheel-drive Ejder.

“The six-by-six tactical vehicles have a bright future in the world, so that’s why we’re working in this field,” said Evren Sesal, a research and development engineer at Nurol. Another company official said the six-wheel Ejder has been exported but did not specify the buyers.

Turkey’s thriving local defense industry reported a growth rate of 19 percent in 2010, confirming analysts’ expectations of “fast and sustainable growth” in the years ahead.

“The Turkish defense industry’s total revenue amounted to $2.773 billion in 2010, up from $2.319 billion in 2009. This is a robust growth,” said a late April report released by the Defense Industry Manufacturers’ Association (SaSaD), an umbrella organization of Turkish defense companies.

However, the Turkish industry reported a 5 percent decline in exports at $634 million last year, down from $669 million the previous year. “The slight drop in exports reflects the continuing effects in 2010 of the global financial crisis,” SaSaD said.

More than half of the exports from last year came from the armored vehicle makers’ sales, SaSaD officials said.

SaSaD’s export figures are different from those of the Undersecretariat for Defense Industries (SSM), the government’s defense procurement agency. The SSM officially counts civilian aviation exports related to the defense contracts, known as offsets, as part of defense exports, but SaSaD only counts direct defense sales abroad.

Under SSM’s figures, Turkish defense exports totaled $832 million in 2009. SSM’s 2010 figures are not yet available.

“The decrease in exports is a temporary trend because from early figures this year, we see a major increase in foreign sales,” one SaSaD official said. The official figures for 2011 will be available in 2012.

But a senior SSM official said that the 2011 export figures would reach more than $1 billion.