Ukrspecexport and Thailand Signed Contract for Supply of 49 Oplot MBT 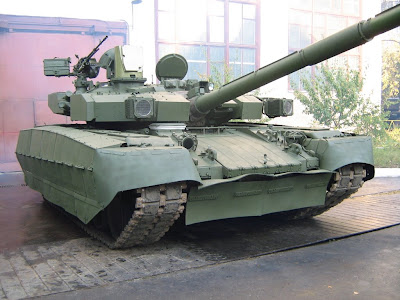 
Ukraine to supply 49 Oplot tanks to Thailand
Ukraine will supply 49 Oplot main battle tanks to the Royal Thai Army, Ukraine's state arms exporter Ukrspecexport told Interfax-Ukraine on Friday.
Representatives of Ukrspecexport and the Royal Thai Army signed the contract for the supply of tanks late on Thursday. The contract details have not been disclosed.
The state company said that the deal was one of the largest in the defense sector. Sources in the defense sector told Interfax-Ukraine that the deal was estimated to be worth about $240 million.
Ukraine is currently providing BTR-3E1 armored personnel carriers to Thailand. The total value of contracts signed in 2006 and in 2011 is estimated at $270 million.
The BM Oplot tank, which was designed by Kharkiv Morozov Engineering Design Bureau on the basis of the Ukrainian T-84 tank, is well known on the world market, and, according to experts, has good market prospects.
(Kiev Post)
Partager cet article