US non-lethal weapon 'wish list' revealed on the net 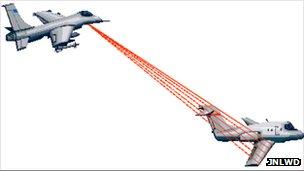 to change direction by using lasers

An alleged US military wish list of real and conceptual non-lethal weapons has been published online.

The document includes improvements to equipment already in use as well as proposals for new technologies.

Experts said the document acted as a "sales pitch" for continued funding.

A copy of the report was obtained and published by "anti-secrecy" site Public Intelligence. The organisation has a track record of publishing US government documents relating to national security.

A spokeswoman for the US Department of Defense said she could neither confirm nor deny the document's authenticity.

Running to over 100 pages, the report details the characteristics of each weapon - as well as possible collateral damage and the policy implications of its use.

Typical effects of the weapons on the human body include temporary blindness, deafness and loss of movement.

One example, the Impulse Swimmer Gun, is described as being able to "suppress underwater swimmers and divers". It says an "underwater pulsed sound wave" affects a diver's hearing causing severe nausea.

The report noted "impact on aquatic life" as possible collateral damage. The weapon is marked as being in the "developmental" stage.

Of the more outlandish ideas, an entry for "Laser Based Flow Modification" details how lasers could be used to disrupt the aerodynamic flow around an aeroplane's wings, forcing an "enemy" plane to change direction.

Other non-lethal weapons said to be in development include:

A system designed to move people through an area by emitting a "heat sensation" causing "involuntary movement".

Electro-muscular pulses which "substantially increase" the time a hostile person can be incapacitated.

A portable system which emits high-powered microwaves capable of stalling a car engine at a distance.

An unmanned, airborne vessel equipped with a microwave-emitting device capable of preventing a ship's propulsion by causing "electrical system malfunction".

The JNLWD was setup in 1996 with the goal of facilitating and deploying non-lethal weapons in the US military in the wake of US operations in Somalia and Bosnia.

"They came up with a new set of missions that didn't involve blowing things up," explained James Lewis, military technology expert and senior fellow at the Washington-based Center for Strategic and International Studies. 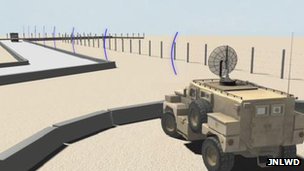 "They're developing the technologies to make it work. It's not clear if some of these things will ever see the light of day, but that's what they're trying to do."

The JNLWD has been criticised in the past for spending money on projects that had never materialised.

A 2009 report by the US Government Accountability Office said that the JNLWD had spent at least $386 million (£250m) on 50 research projects - but had failed to actually produce any new weapons.

However, a need to deploy non-lethal techniques in "nation-building" operations was becoming increasingly crucial, Mr Lewis told the BBC.

"One of the big problems in Iraq was if you set up a checkpoint and the cars didn't stop. At least half the time the car was completely innocent - but the only thing guys had to stop them with were weapons."

Mr Lewis told the BBC that this document was designed as a fresh sales pitch to Congress and the Department of Defense.