Minister for Defence Materiel Dr Mike Kelly AM MP today announced the delivery of the 1000th Mercedes-Benz G-Wagon under Project LAND 121 Phase 3A.
The new G-Wagons, along with Australian-made trailers, are being rolled out to Army and Royal Australian Air Force units as part of LAND 121 ‘Project Overlander’, a $7.5 billion program delivering more than 7500 protected and unprotected vehicles to the Australian Defence Force (ADF) over the next decade.
“The new G-Wagons will help prepare ADF personnel for operations and provide the flexibility to undertake a wide range of tasks in difficult off-road conditions, while ensuring that Australian soldiers are better prepared and equipped,” Dr Kelly said.
The new variants are used as tactical training vehicles and for a wide range of support tasks. 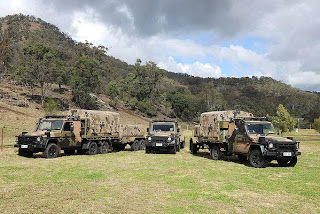 “G-Wagon variants include utility, ambulance, surveillance and reconnaissance, mobile command post variants, and even a canine variant to transport military working dogs and their handlers,” Dr Kelly said.
Dr Kelly congratulated Mercedes-Benz on the delivery of the first 1000 G-Wagons, adding that the G-Wagon represents a big step forward for the ADF’s tactical training capability.
“Today’s handover of the 1000th G-Wagon represents an important milestone at the Mercedes-Benz facility in Mulgrave, Victoria,” Dr Kelly said.
“At the Mulgrave facility, modules and tray bodies provided by G.H. Varley in Newcastle are integrated with the vehicles and pre-delivery work is undertaken.”
A total of 2146 G-Wagons are being rolled out to ADF units between July 2012 and June 2016.
AUS DoD
Partager cet article