Russian Aircraft Carrier To Redeploy to the Mediterranean

The Russian Navy only aircraft carrier Admiral Kuznetsov was scheduled to go on the dry dock at Severodvinsk to begin a four-year upgrade, but due to the hightened tension in Syria it is likely to continue service unchanged, joining the new Mediterranean Task Force the Russian Navy is deploying to the Mediterranean sea.

The Russian Navy plans to deploy its single aircraft carrier in support of its newly formed Mediterranean task force, Commander Admiral Viktor Chirkov said, a declaration that could further escalate rhetorics over the Syrian conflict. The carrier “Admiral Kuznetsov” will be ready to join the naval task force by the end of 2013. Defense-Update reports.

Last year the Russian carrier was deployed off the Syrian coast supporting a two-week naval mission in the Mediterranean. The carrier returned to its home base in Severomorsk on February 17 2012 and was scheduled to enter a four year mid-life upgrade by year’s end. 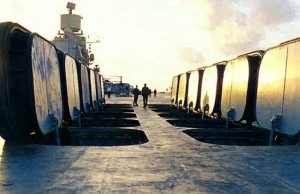 The Russian Navy sought to replace the P-700 Granite anti-ship missiles with catapults, more hangars and new air defense systems, enabling the carrier to operate with more aircraft (MiG-29K fighters would have replaced the current Su-33s.)

The overhaul to be carried out by the Severodvinsk Sevmash shipyard would include the removal of the P-700 Granit anti-ship missiles, installing of catapults to the angled deck, and upgrading of the vessel’s powerplants. The air wing currently operating Su-33 fighters would expand, and convert to modern MiG-29K jets. Upgrades to the ship’s electronics and sensor equipment were also planned, along with the installation of the new anti-aircraft system. Admiral Kuznetsov was scheduled for a relaunch in 2017. Pushing back the refit seems to be a blow to the Navy, as the ‘Kuznetzov’ is already considered a ‘goulag’ for seamen, due to appalling living conditions on board.

This ambitious refit is now cut short, enabling the vessel to redeploy, responding to  heightened tension in the Eastern Mediterranean. Russia’s only Mediterranean naval base is at the Syrian port of Tartus. Moscow has been reinforcing its Mediterranean presence as the conflict in Syria has worsened. In March, warships from Russia’s Pacific Fleet entered the Mediterranean for the first time in decades to become part of what Moscow says is a permanent task force. That task force also includes vessels from the Northern, Baltic, and Black Sea fleets.