Twelve aircraft to be acquired in multi-year programme.

Airbus Defence and Space has been selected by the French Ministry of Defence to supply 12 A330 MRTT new generation air-to-air refuelling aircraft for the French Air Force. The first delivery is foreseen for 2018, followed by the second in 2019, and then at a rate of one or two per year.

The contract agreed between the French procurement agency, la Direction Générale de l’Armement (DGA), and Airbus Defence and Space is now ready for the official award. The contract covers the development and qualification of the specific French configuration as well as the associated support and training systems, such as spares, ground support equipment, training devices and five years of in-service support from first delivery.

France’s choice of the A330 MRTT makes it the sixth nation to order the type following Australia, Saudi Arabia, Singapore, the United Arab Emirates, and the United Kingdom which have ordered a total of 34 aircraft. In addition, India and Qatar have selected the MRTT and are in the final stages of contractual negotiations for six and two aircraft respectively. A total of 22 aircraft are currently in service and the aircraft has been battle-proven in recent coalition actions.

The A330 MRTT has won every major tanker aircraft procurement competition outside the USA since it has entered the market.

Airbus Defence and Space Executive Vice President Military Aircraft, Domingo Ureña Raso said: “The French Air Force has enormous experience in the field of air-to-air refuelling. It knows the factors which are critical to success and its selection of the A330 MRTT is a real honour for us. In addition it is a long-standing operator of our transport aircraft and as always we are particularly proud in gaining the further confidence of an existing customer.”

In French service the A330 MRTT will be powered by Rolls-Royce Trent 700 engines, be equipped with a combination of the Airbus Refuelling Boom System and underwing hose-and-drogue refuelling pods, and can be configured in a variety of layouts carrying up to 271 passengers as well as medevac arrangements including the French MORPHEE intensive care module carrying up to ten patients as well as 88 passengers.

The US Defense Security Cooperation Agency has notified Congress of a potential foreign military sale (FMS) of C-17 Globemaster III aircraft and associated equipment to Australia.

The additional C-17A aircraft are expected to further improve Australia's capability to deploy rapidly in support of global coalition operations, while greatly enhancing its ability to lead regional humanitarian and peacekeeping operations.

Approved by the US Department of State, the sale contributes to the foreign policy and national security of the US. This is due to the fact that it is helping improve the security of Australia, a major contributor to political stability, security and economic development in South East Asia.

Boeing has been named as prime contractor for the FMS programme.

"Under the estimated $1.609bn sale, Australia has made a request for the supply of up to four C-17A Globemaster III aircraft."

The Royal Australian Air Force currently operates six C-17As from RAAF Base Amberley in Queensland, in support of domestic and international missions.

The C-17 Globemaster is manufactured by Boeing. It is a military tactical transport aircraft designed to conduct rapid strategic airlift of troops and supply of palleted cargo to main operating bases or forward-operating bases in extreme climates worldwide.

As well as being able to land on short, sharp runways, the aircraft can also perform tactical airlift, medical evacuation and airdrop missions.

Alongside the Royal Australian Air Force, the C-17 Globemaster is also operated by air forces in the US, India, UAE, Canada, Qatar, the UK and the 12-member Strategic Airlift Capability initiative of Nato and Partnership for Peace nations.

Tel Aviv - The Israeli air force is adding the newly introduced Lockheed Martin C-130J to its long-range operational capabilities, having recently performed a proving flight that helped to develop its tactics for using the"Samson". During the long-range flight, the air force conducted a sortie over the skies of Greece, Romania and Bulgaria.

A leaked US document has put the Canadian government under fire over the proposed F-35 purchase.

VICTORIA, BRITISH COLUMBIA — A leaked US document has raised new questions about Canada’s involvement in the F-35 program and given critics of the fighter jet as well as opposition members of Parliament new ammunition to accuse the Canadian government of misleading the public about the proposed acquisition.

An Oct. 27 briefing by US Air Force Lt. Gen. Chris Bogdan, F-35 Program Executive Office director, outlined how Canada intends to initially purchase four F-35s. That flies in the face of continued Canadian government assurances that no decision had been made about whether the country would buy the aircraft.

Defense News has seen a copy of the document.

The government, under continuing fire about the increasing cost of the F-35s, announced in December 2012 it would put the procurement on a temporary hold and examine other aircraft. That process is ongoing, government ministers said.

But Bogdan’s briefing to US Air Force Secretary Deborah Lee James undercuts those claims. Bogdan pointed out that Canada wants to “swap” four aircraft destined for the US Air Force and receive those as early as 2015.

The aircraft would be replaced at a later date by Canada.

Bogdan noted in the 14-page briefing deck that the US Air Force agrees with the plan as long as the F-35 initial operating capability date of 2016 remains on schedule and no other allies make similar requests.

For the swap to happen, Canada needs to deliver a letter of intent to the F-35 project engineering office this month, the briefing points out. Congress would also have to be notified.

Kyra Hawn, spokeswoman for the F-35 Joint Program Office, said the “briefing was for official use only. It was to inform future decisions regarding Canada’s F-35 acquisition. We will not be commenting any further on the content of the slides.”

Lockheed Martin spokesman Mike Barton referred questions to Canada’s Public Works Department “as these would be government-to-government type discussions and nothing we would be privy to.”

Marcel Poulin, press secretary for Public Works Minister Diane Finley, said, “No decision has been made on the replacement of Canada’s CF-18 fleet.”

He did not explain why Bogdan was informing James about Canada’s decision to proceed with the F-35 if the Canadian government still had not made a decision on purchasing the aircraft.

But analysts and opposition MPs are pointing to Bogdan’s briefing as a smoking gun that proves the Conservative Party government has been misleading Parliament and the Canadian public.

“Getting into the production line this fiscal year is clearly an intention to go ahead and buy those planes,” said Jack Harris, defense critic with the official opposition New Democratic Party.

He noted that the Bogdan briefing proves the Canadian government is “going behind the backs of Canadians” and that it plans to move ahead with the acquisition despite continuing concerns about the F-35 and its costs.

Alan Williams, the former Canadian defense procurement chief, said the information contained in Bogdan’s briefing raises questions about the government’s claims it is examining other aircraft besides the F-35 to replace the CF-18s.

“The government claims about a fair and transparent process are called into question,” Williams said.

Some Canadian aerospace industry representatives and political analysts, such as Michael Byers of the University of British Columbia, see the move as designed to quickly lock the country into an F-35 purchase before any competition could be considered.

Industry representatives said the move was clumsy, destined to fail and will only provide further ammunition for F-35 critics.

Canada is still an official partner in the F-35 program and has not informed the US government or Lockheed Martin of any plans to change that. Canada operates 78 CF-18 fighter aircraft. It was originally planning to replace those with the conventional take-off and landing version of the F-35.

In the meantime, the Canadian government has ordered a modernization program for the CF-18s to keep them flying until 2025.

Johanna Quinney, spokeswoman for Defence Minister Rob Nicholson, said the modernization project is expected to start in 2016 and be completed in 2019.

The program will include replacement of some flight controls, as well as structural and avionics upgrades. Core CF-18 avionics systems will also need to be augmented to provide secure communi­cations between the CF-18 and allied units, Quinney said. The aircraft’s software will also be modernized and simulators will be upgraded.

China unveiled its version of the U.S. F-35 Joint Strike Fighter — the Shenyang FC-31 — at the biennial Zhuhai Air Show in a surprise to the rest of the world’s aviation community.

The military aviation display comes ahead of President Obama’s visit to Beijing for the APEC summit. It also comes right before Defense Secretary Chuck Hagel had planned to visit U.S. allies in the Pacific. Hagel has since delayed that trip.

Many have speculated that China’s display of the FC-31 was meant as a show of force as the U.S. makes strides on its own F-35 program.

Rarely do the Chinese display an aircraft ahead of the completion of its development, which caused the ground swell when the FC-31 made headlines at the Chinese air show. Plenty of cameras from across the globe were pointed into the sky as foreign military leaders got their first up close look at the aircraft. 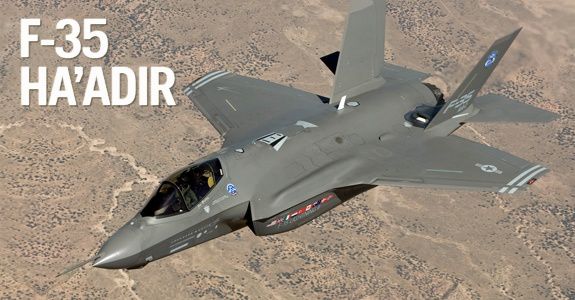