April 17, 2013: The increasing costs of the new U.S. F-35 fighter are scaring off foreign buyers. The latest country to express doubts about the cost and effectiveness of the F-35 versus their current jet fighters (often F-16s) is the Netherlands.

Further to its announcement of 15 April 2013 and in the frame of its share buyback programme, EADS confirms the conclusion of a share purchase agreement with the French State for the acquisition off-market of a stake of 1.56% in EADS for € 482.7 million.

2013-04-16 - (By Peter Wood and Cristina Garafola and from atimes.com) - While much attention has been given to Chinese development of fixed-wing aircraft like the J-20 and J-31, relatively little has been devoted to China's helicopter development.

Rockwell Collins has been awarded two contracts to provide service and support for the KC-135 Pacer CRAG (Compass, Radar and GPS) program. The scope of the avionics repair package consists of nearly 4,000 line replaceable units across the fleet of 417 KC-135 aircraft and will be one of the largest repair contracts in terms of volume for Rockwell Collins in its 80-year history. 12 April 2013 Belgium Armed Forces' first NH90 Nato Frigate Helicopter (NFH) has successfully carried out its maiden flight at Eurocopter's facility in Donauwörth, Germany. During the 45 minute test-flight, the helicopter in its full operational capability standard was tested by the crew to validate its basic systems and flight qualities.

FORT WORTH, TX --- Bell Helicopter provided a program update on the OH-58 Kiowa Warrior program at the 2013 Army Aviation Association of America's (AAAA) Annual Professional Forum and Exposition, highlighting the program's accomplishments in the last year.

The F-35 Joint Strike Fighter will be the new multirole fast jet for the Royal Navy and Royal Air Force. It will serve as the strike capability for the new Queen Elizabeth Aircraft Carrier and will partner the Typhoon to form the future fast jet fleet for the RAF.

Pratt & Whitney has proposed a shift to a multi-year sustainment contract four years early for the engine that powers the Lockheed Martin F-35, in a bid to reduce projected maintenance costs by a "double-digit" percentage.

Press Release (Source: Finmeccanica; issued April 15, 2013) ROME --- The Shareholders' Meeting of Finmeccanica Spa, which met today in Rome, under the chairmanship of Admiral Guido Venturoni, made the following decisions: - To appoint Mr Ivanhoe Lo Bello, who was already co-opted by the Board of Directors on 16 May 2012 ex Art.

PMP, the munitions arm of Denel, is putting its expertise in propellants to use in saving lives with the approval of the world's largest ejection seat manufacturer. The Pretoria West-based company..

An internet bandwidth upgrade being rolled out on the E-6B Mercury aircraft, the nation's airborne strategic command platform, is expanding the jet's capability to support the nation's leaders in a crisis. The Internet Protocol Bandwidth Expansion (IPBE) upgrade was recently installed during a service life extension program (SLEP) overhaul on aircraft 410, which was delivered to the Navy on March 14.

The Russian Air Force's next-gen strategic stealth bomber has come one step closer to entering service after officials voted in favour of its intended design and technical specifications on 11 April 2013. As a result, initial developmental work is the next step, after the Russian Government formally approved the project last year.

IN FOCUS: Time for UK's Watchkeeper UAV to deliver

In the late 1990s, British Army operators became so frustrated with the performance limitations and high accident rate affecting their Phoenix unmanned...

ROME - After streamlining operations at its Alenia Aeronautica unit, Italy's Finmeccanica is continuing its restructuring mission by preparing to cut more than 2,500 jobs at its Selex ES electronics unit, which employs 17,000. 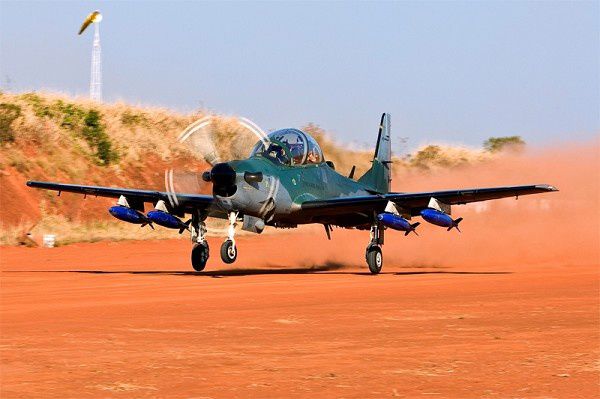 The company aims to increase its sales in the sector by 25 percent this year, Luiz Carlos Aguiar, president of Embraer’s defense and security unit, said on the sidelines of this week’s LAAD Defense and Security expo here.

Between 2006 and 2012, Embraer’s defense activities expanded by an average of 29 percent annually to represent 17 percent of total sales, up from six percent.

Aguiar said the company hoped to grow 12 percent a year between now and 2020.

Last year, sales of its defense and security products exceeded $1 billion for the first time.

“The government wants to make Embraer a major defense player, and not just in the aerospace sector,” said Nelson During, a respected Brazilian defense expert who runs the DefesaNet website.

“Embraer wants to expand and diversify its products so as not to depend only on its commercial aircraft which are susceptible to the (economic) crisis, as happened in 2008.”

The company is banking on the development of surveillance systems (radar, electronic systems) and will be a key competitor in all future tenders, During said.

BNDES, the government’s development bank and investment arm, extended a line of credit to help Embraer finance the purchase of six Super Tucano A-29 light attack aircraft by Guatemala and three by Senegal, announced this week.

“The line of credit is part of the defense strategy,” Aguiar told reporters. “It is not very different from what we see in the rest of the world.”

For Embraer and the Brazilian defense sector in general, this government support is fundamental, according to During.

For years, BNDES and the government have been supporting sales of Embraer commercial aircraft, enabling it to offer financing terms comparable to those of competitors.

Brasilia is committed to developing a major domestic defense industry.

Currently, SISFRON — a web of drones, radars, sensors and communication systems — is in the experimental stage. It is deployed 650 kilometers (400 miles) along the border of Mato Grosso do Sul state with Paraguay and Bolivia.

Later, it will be extended along the country’s 16,000 kilometers of borders with nine neighboring countries and French Guiana, an overseas territory of France, at an estimated cost of $6 billion.

“It is a $350 million program in its initial phase, which gives a major boost to Embraer contracts. It could mean billions of dollars,” said During. This week, Embraer also launched the sale of its new military transport aircraft KC-390, the biggest built by Brazil, in partnership with Argentina, Chile, Colombia, the Czech Republic and Portugal.

The goal is to sell 728 such planes to 77 countries for a total value of more $50 billion.

Aguiar said his company was ready to enter a market dominated by US firm Lockheed Martin’s C-130 Hercules.

He added that the KC-390 would be sold at lower prices than those offered by competitors, without going into details.

Such planes are sold at between $90 and 125 million but Embraer will offer “much more competitive prices,” he noted.

Meanwhile, Embraer’s Super Tucano contract with Guatemala this week to help protect the Maya Biosphere also includes a command and control system, three primary three-dimensional radars as well as logistical support for air operations and training for pilots and mechanics.

The contract with Senegal also provides for logistical support for air operations and a training center for pilots and mechanics.

This week, Embraer further announced a $127 million contract with the Brazilian Air Force to provide logistical support and services to its fleet of 92 Super Tucanos.