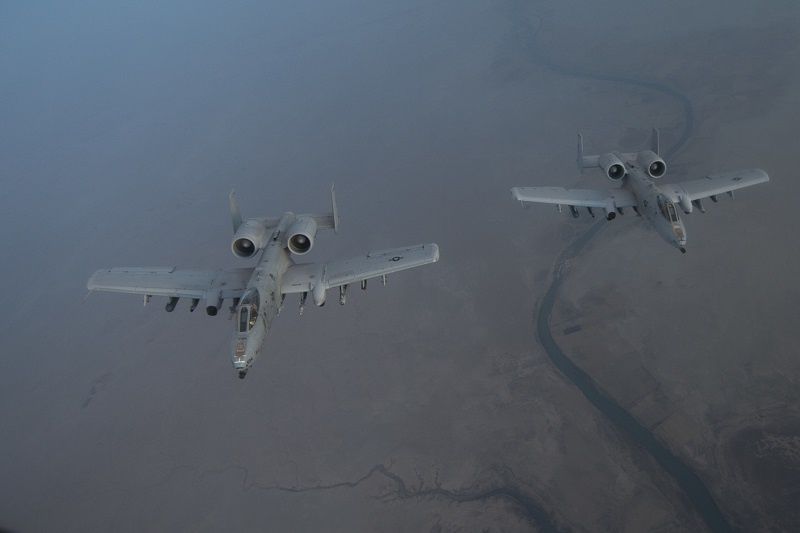 US Air Force aircraft of the 4th Fighter Wing (F-16A, F-15C and F-15E) fly over Kuwaiti oil fires, set by the retreating Iraqi army during Operation Desert Storm in 1991.

Feb. 28 marked the 24th anniversary of the end of the first Gulf War, Desert Storm, the only major war since World War II that ended in victory for the US, with all objectives met. Desert Storm is also notable for its remarkably short duration, only 42 days.

These facts stand in sharp contrast to our two major wars waged since then in Iraq and Afghanistan, both lasting more than a decade after the attacks on Sept. 11, 2001, which initiated them, and both marked by unclear military objectives and endless nation-building.

Now, we are engaged in an adjunct of the Iraq war against the Islamic State group, a war also notable for its lack of clear objectives and seemingly endless duration. To defeat this enemy, the US needs to adopt the same kind of strategy and mindset used so effectively in 1991.

What made Desert Storm so short and so effective were the clear military objectives laid down by President George H.W. Bush, the military strategy put together in the Pentagon leading with massive air power, and the leadership of Army Gen. Norman Schwarzkopf and Air Force Gen. Chuck Horner in directing the plan with relentless pounding by airpower, day and night for a month, allowing "boots on the ground" to finish the job in just four days.

The result of this intense application of airpower followed by swift ground action was total victory; quickly, decisively, with overwhelming force and few casualties. This is the way modern wars should be fought.

Islamic State forces are deployed differently and are more scattered than were the Iraqi forces in Desert Storm. They control a larger area than the Kuwaiti theater. But the principles of applying intense air attacks and swift ground offensives are the same. Yet, we are fighting Islamic State with a misapplication of airpower, dribbling a few air attacks here and there with no clear objective other than to "degrade" the enemy.

The contrast between Desert Storm and the war against the Islamic State group could not be more stark. President Bush clearly enunciated the military objectives for Desert Storm: Evict Iraqi forces from Kuwait, incapacitate Iraq's leadership and military capability, and defend Saudi Arabia from Iraqi invasion. In short, get in, win and get out, leaving no occupation forces.

He left the military strategy and campaign plan to the generals and did not interfere. They put together a massive around-the-clock air campaign simultaneously attacking military targets in and around Baghdad and air attacks against Iraqi forces in Kuwait. And the plan deployed overwhelming ground forces to ensure they could quickly destroy the remaining "elite" Iraqi Republican Guard forces, free Kuwait and set the Iraqi military back for at least 10 years.

The plan worked as designed. The one-two punch of intense airpower followed by overwhelming ground forces, then withdrawal from occupied territory, was the right strategy.

Around-the-clock surveillance detected any military flights, movement of ground military vehicles and tracking of US aircraft by ground radars. Any movement or tracking was met with immediate, lethal attacks. The no-fly zones were effective, low-cost and without casualties for the 10 years they were in effect.

Since Desert Storm, we have lost sight of the importance of clearly defined military objectives and building a campaign strategy to win quickly and decisively with airmen and soldiers working together. It is not too late to put together the same combination to win against the Islamic State group. The scenario is different, but the principles of warfare remain the same. The result may well be not just winning quickly and decisively, but the basis for deterring future IS-like movements. But the current approach against the Islamic State group will lead to neither victory nor deterrence, just endless, piecemeal warfare.

We should change course now, apply the lessons of Desert Storm, go on offense, and take the lead in the air and on the ground in the fight against the Islamic State group — to win.