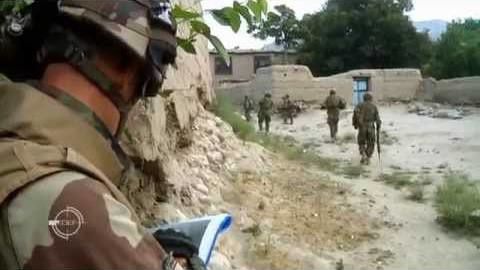 After 13 years of operations fighting terrorism and establishing security as part of the international coalition, French troops have left Afghanistan. Afghan forces are now responsible for the security of their country. During those 13 years, nearly 70, 000 French soldiers were deployed to the Heracles, Pamir, Ares and Epidote operations. They fought there. Each of them has left a part of their soul in the mountains of Afghanistan. 700 were injured. 89 lost their lives there, in the name of their commitment. In this first issue of the Journal of Defense, Afghanistan Special, we will transport you to the theatre of operations to relive the key moments of the French involvement. Pentagon to organize drones in teams for sharing data, fighting together

The Pentagon's research unit is ready to launch a program that unites drones into teams allowing them to share data and act together on a battlefield while being operated by one human. The Defense Advanced Research Projects Agency (DARPA) recently announced that the Proposers' Day for its Collaborative Operations in Denied Environments (CODE) program will be held on April 11. CODE's goal is to unite "autonomy and inter-platform collaboration" of unmanned aerial vehicles.

DARPA intends to develop four "critical technology areas" for its future drones: single-drone flight autonomy; a human-systems interface that allows a "mission commander" to operate a drone fleet; drone-team collaboration; and an "open architecture" that allows drones to pass information between each other and humans.

According to DARPA, the CODE project will prepare today's relatively primitive drones for future conflicts, which will be characterized by "a higher level of threats, contested electromagnetic spectrum, and re-locatable targets." DARPA believes that in future, drone technology will be more widespread, and enemies will be more ready to counteract.

It was recently reported that DARPA is also doubling funding for its Hydra program, which develops underwater drones. Some of DARPA's other projects include inaudible military vehicles, the ATLAS robot, brain-reading technology and lasers to shoot down multiple enemy drones.

"Many missions require dedicated vertical take-off and landing (VTOL) assets, but most ground units don't have their own helicopters," said Ashish Bagai, DARPA program manager, in a press statement. "ARES would make organic and versatile VTOL capability available to many more individual units. Our goal is to provide flexible, terrain-independent transportation that avoids ground-based threats, in turn supporting expedited, cost-effective operations and improving the likelihood of mission success."

The ARES is in its third and final phase, with Lockheed Martin currently taking the lead on DARPA's research.

There is increased interest in using smaller, field-deployable drones, so soldiers on the ground are able to do short-range reconnaissance - or to launch small-scale aerial assaults. Unlike civilian smartphone-controlled drones, DARPA is seeking technology able to carry up to 3,000 pounds, allowing for weapons and supply reinforcements as well.

Private sector companies and government contractors have already developed technologies for use by special forces, but ARES could be widely deployed.

DARPA's new search engine to crawl Deep Web, root out human trafficking and illicit business
A new kind of web search engine capable of ferreting out human trafficking operations and other illegal activities, hidden in the "deep Web" of the Internet, is expected to become reality in a few years as the US agency responsible for the development of new technologies for use by the military is looking for a partner to create a project which may come in handy for law enforcement and military operations.

The Defense Advanced Research Projects Agency, or DARPA, is the agency which works on the development of new military technologies such as robots, satellites and body armor. It is currently seeking ways to technologically index the "deep Web" of the Internet - forums, chat rooms and other semi-hidden parts of the Web - which are not scanned by the majority of search engines such as Google and Bing and where a substantial part of illicit business takes place.

The brand-new project was dubbed "Memex " which is a combination of the words "memory" and "index." The main objective of Memex is rooting out human trafficking operations, including labor and sex trafficking. The system is supposed to replace sites that have enabled software that currently prevents them from being "crawled" by today's search engines. According to DARPA, "an index curated for the counter trafficking domain, along with configurable interfaces for search and analysis will enable a new opportunity for military, law enforcement, legal, and intelligence actions to be taken against trafficking enterprises."

Last year, Time magazine wrote about the "deep Web", emphasizing that it is an "electronic haven for thieves, child pornographers, human traffickers, forgers, assassins and peddlers of state secrets and loose nukes." The problem is that many of these sites hide in the less-monitored corners of the Internet and cannot be accessed with normal search engines as they require specific software programs.

Interestingly, the "deep Web" was crafted by the US government as a tool for espionage agents and law enforcement. However, over the past decade, it became widely used by people searching for privacy or ways to conduct illicit activities on the Internet secretly.

The Memex project was opened for proposals last week and companies can submit their final proposals until April 8.

Meet ARES: DARPA's newest transformer-style drones under development
The US Defense Advanced Research Projects Agency, better known as DAPRA, presented concept images of its scheme to pair up the US military with modular drones named Aerial Reconfigurable Embedded System (ARES for short), capable of transforming to comply with the needs of different missions.

The ARES drone will be utilized as an unmanned vehicle that would be able to set military units down in dangerous environments. The UAV could also be used as a resupplying entity for troop deployments. If injured combatants need to be evacuated from an area, ARES can help facilitate such ventures.

The final variant of ARES has been shown off as a sort of drone that can buzz around air space but can also be connected to a variety of modules such as vehicles or special container units. It was created from a project called Transformer (TX) with the primary goal being to make "a ground vehicle that is capable of configuring into a VTOL [vertical take-off and landing] air vehicle that provides sufficient flight performance and range, while carrying a payload that is representative of four troops with gear."

"ARES would make organic and versatile VTOL capability available to many more individual units," Ashish Bagai, DARPA program manager, said in a statement, "Our goal is to provide flexible, terrain-independent transportation that avoids ground-based threats, in turn supporting expedited, cost-effective operations and improving the likelihood of mission success." Design assistance and system integration techniques are being taken care of by Lockheed Martin Skunkworks, with ARES in its last stage.

U.S. military experience has shown that rugged terrain and threats such as ambushes and Improvised Explosive Devices (IEDs) can make ground-based transportation to and from the front lines a dangerous challenge. Combat outposts require on average 100,000 pounds of material a week, and high elevation and impassable mountain roads often restrict access. Helicopters are one solution, but the supply of available helicopters can’t meet the demand for their services, which cover diverse operational needs including resupply, tactical insertion and extraction, and casualty evacuation.

ARES would center on a VTOL flight module designed to operate as an unmanned aerial vehicle (UAV) capable of transporting a variety of payloads. The flight module would have its own power system, fuel, digital flight controls and remote command-and-control interfaces. Twin tilting ducted fans would provide efficient hovering and landing capabilities in a compact configuration, with rapid conversion to high-speed cruise flight similar to small aircraft. The system could use landing zones half the size typically needed by similarly sized helicopters, enabling it to land in rugged terrain and aboard ships.

It is envisioned that the flight module would travel between its home base and field operations to deliver and retrieve several different types of detachable mission modules, each designed for a specific purpose—cargo pickup and delivery, casualty extraction or airborne intelligence, surveillance, and reconnaissance (ISR) capabilities, for instance. The flight module would have a useful load capability of up to 3,000 pounds, more than 40 percent the takeoff gross weight of the aircraft.

Units could direct the flight modules using apps on their mobile phones or ruggedized tablets. Initially, the system would be unmanned, with a future path towards semi-autonomous flight systems and user interfaces for optionally manned/controlled flight.

ARES is currently in its third and final phase. Lockheed Martin Skunk Works ® is the lead vehicle design and system integration performer for Phase 3 of the program.