Schiebel Camcopter S-100 being used by OSCE to monitor ceasefire in eastern Ukraine.

The Organization for Security and Co-Operation in Europe has lost contact with a Schiebel S-100 Camcopter unmanned air vehicle that was carrying out surveillance missions over Ukraine. The OSCE confirms that on 3 February the Ukrainian Special Monitoring Mission lost contact with the vehicle 16km (10 miles) north of Mariupol – 96km south of the Russian backed rebel-held Donetsk region – which it is still in the process of locating.

Following sea trials on board the L’Adroit Gowind-class Offshore Patrol Vessel, the DGA, the French Navy and DCNS validated all functional blocks between DCNS’s Polaris combat system and the Camcopter S100 VTOL UAV developed by Schiebel of Austria. Based on the results of the trials, the DGA has issued DCNS with a permit to fly for the Camcopter S100. 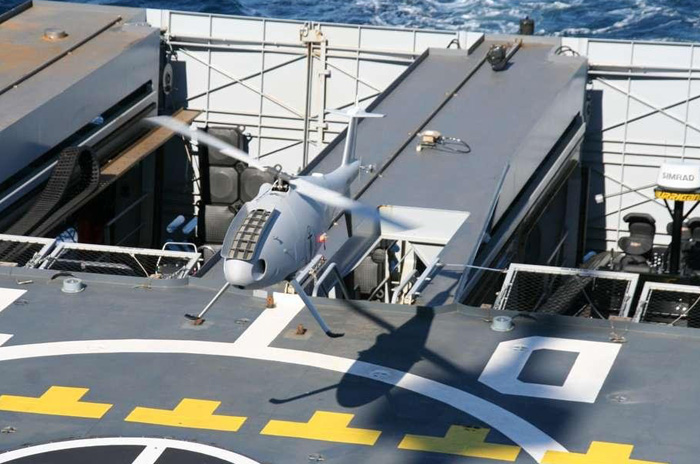 S100 landing on the flight deck of the French OPV L’Adroite. The small unmanned rotorcraft performed over 200 landings on the vessel during the first sea trials phase conducted in the summer of 2013. Photo: French Navy. 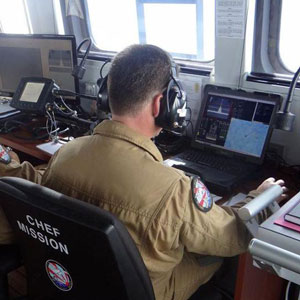 The Camcopter mission chief operates the S100 payload from the bridge of the OPV L’adroit. PHOTO: French Navy

Launching and recovering a UAV from a warship presents many complex challenges. The successful physical and functional integration of a tactical VTOL (Vertical Take-Off and Landing) UAV on board a surface combatant by DCNS, with no impact on flight safety, represents a major breakthrough for naval air forces. For these tests, L’Adroit’s single mast architecture, spacious flight deck, and helicopter hangar provided a great benefit.

Following the tests on board the L’Adroit the French Navy plans to further test SERVAL on board the La Fayette. Operation from a frigate would be much more challenging, as the physical integration such as antenna positioning, data link integration, and space provisions for operational crew, maintenance and support are more limited. The functional integration of data from the drone in the combat system becomes imperative.

The tests were designed to evaluate the performance of the DIOD-A module, developed by DCNS and integrated on this occasion with the Polaris combat system, for managing UAV payload data (from electro-optical sensors in this case) in real time. A further aim was to demonstrate that the interface between the UAS and the ship’s combat system has no impact on flight safety.

The test validated that the module has met all DGA requirements, and therefore, can now deliver significant operational enhancement for the combat management system through the employment of VTOL UAV.

“Thanks to its optical camera and long battery life, it allows you to see beyond the horizon, and greatly increases the potential that has the patrol patrol,” says Commander Luc Regnier, Capitaine of L’Adroit. The drone detachment chief, Commander Marc Grozel added that back in September 2013, when L’adroit assumed missions under the European Union borders security mission (FRONTEX), the vessel could double the surveillance area it could cover without the drones.

Full integration of UAV data into the combat management system and the operational integration of the UAV operator into the CIC (Combat Information Centre) turn the UAV into a ‘telescopic arm’ of the ship, extending its operational capabilities by providing real-time data from the theatre of operations beyond the range of its onboard sensors. A UAV with an optronic payload constitutes an offboard sensor platform that can relay data back to the host ship to identify threats from pirates, for example, or to monitor fishing vessel inspection operations.

Navies in Europe and around the world are expressing strong interest in offboard sensor systems. The sea trials have successfully validated integration of a VTOL UAV with a surface combatant for the first time in Europe.

The French Navy is evaluating the use of drones on board its vessels towards the SDAM System (Naval Aerial Drone) to be implemented by 2020. SDAM is likely to be larger than the S100, and carry multiple sensors including maritime surveillance radar. 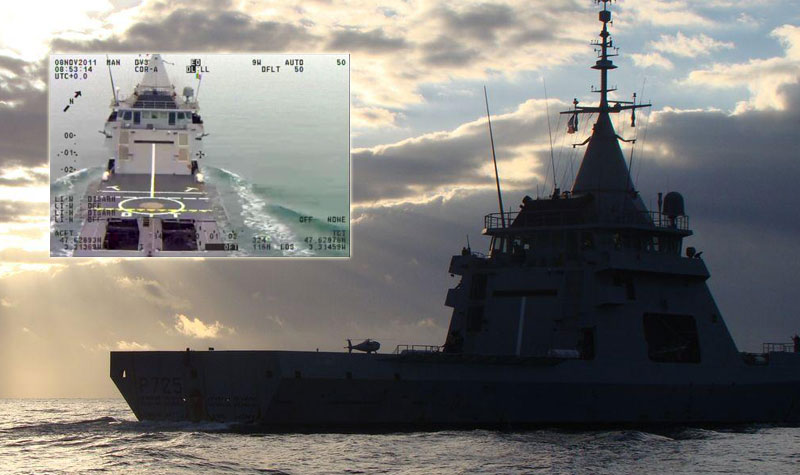 L’adroit at sea during the S100 integration evaluation, December 2013. The small drone can be seen on the flight deck at the aft. inset view shows the vessel as the S100 approaches to land, during sea trials in 2011. Photos: French Navy