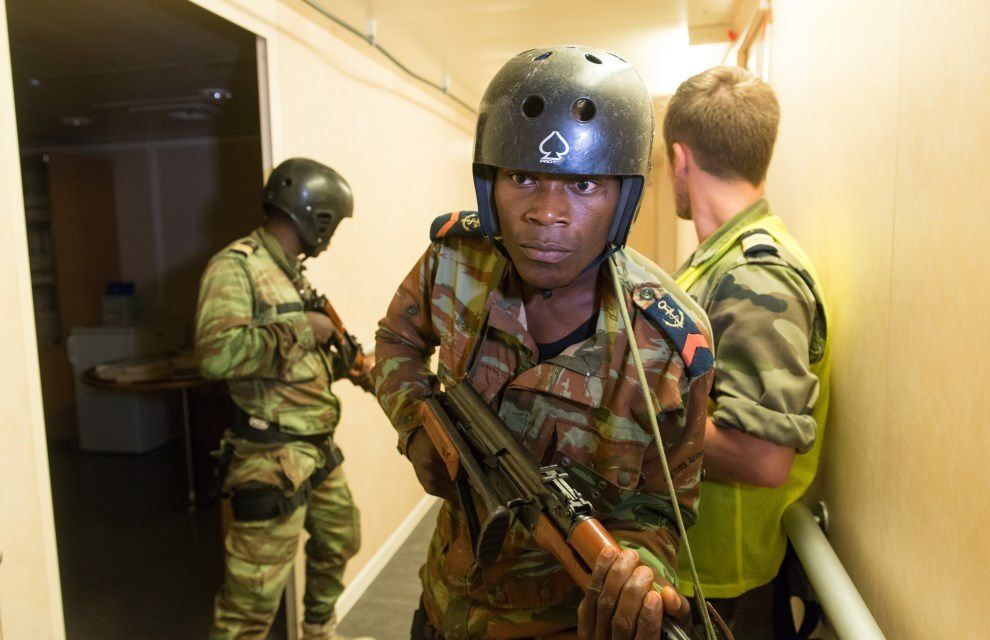 The United Nations is preparing to possibly deploy peacekeepers to Central African Republic, but if the crisis there worsens quickly before such a force is ready, it could redeploy troops from nearby U.N. missions, U.N. chief Ban Ki-moon said on Monday.

The landlocked, mineral-rich nation of 4.6 million people has slipped into chaos since northern Seleka rebels seized the capital, Bangui, in March and ousted President Francois Bozize. Rights groups say both sides may have committed war crimes.

There is currently a 2,500-strong regional peacekeeping force in Central African Republic that was deployed by the Economic Community of Central African States. Ban said the African Union is due to take charge of that force in December and boost its size to 3,600 troops.

Ban said the African Union and the Economic Community of Central African States have signaled their support for eventually transforming the African Union force into a U.N. peacekeeping operation, but not in the immediate future as they want a chance to try and combat the crisis first.

"I have instructed the (U.N.) Secretariat to prepare plans accordingly, pending a decision of the Security Council," Ban wrote in a report to the 15-member U.N. Security Council.

"Should there be a precipitous deterioration in the situation in the Central African Republic, the United Nations could also respond on an emergency basis, once authorized by the Security Council and the relevant troop-contributing countries, by drawing on assets as well as troops from neighboring peacekeeping missions," he said.

Central African Republic is rich in gold, diamonds and uranium, but decades of instability and the spillover from conflicts in its larger neighbors have left the country mired in cycles of crises.

Senior U.N. officials have warned that Central African Republic is at risk of spiraling into genocide, as armed groups incite Christians and Muslims against each other in the virtually lawless country.

"While the conflict was not, at its origin, a religious or ethnic one, the increasing attacks and indiscriminate retaliations have created a climate of deep suspicion between Christians and Muslims in some areas of the country," Ban said.

"Further tensions between communities, including through the political manipulation of these fears, might well lead to uncontrollable sectarian violence with untold consequences for the country, the sub-region and beyond," he said.

Ban said the African force, which has been mandated by the African Union for six months, faces significant operational challenges and will need a lot of external support.

He presented four support options in his report, ranging from financial and logistical support for an African mission from individual countries and regional organizations to a comprehensive U.N. support package funded through assessed contributions.

A fifth option presented was the transformation of the African force into a full-scale U.N. peacekeeping mission. Ban said such a force would have an initial strength of 6,000 troops with the option of increasing that to 9,000 if the situation worsened. The force would also include 1,700 police.

"The United Nations force operate under robust rules of engagement with a mandate to use all necessary means to deny armed groups freedom of movement and access to the major cities," Ban said.

But he added that a number of conditions would need to be in place for a U.N. peacekeeping mission to be deployed, including the political framework for a transition and for the transitional government to distinguish between forces who represent the state and those who do not.

French diplomats, speaking on condition of anonymity, said they planned to propose in December a U.N. Security Council resolution - based on Ban's report - to provide support for the African Union peacekeeping force.

Security Council diplomats, speaking on condition of anonymity, said a final decision on whether to deploy a new U.N. peacekeeping force in Africa would not be made until after the African Union troops have a chance to try and pacify the situation in Central African Republic.

"Member States of the United Nations now have the opportunity, and I firmly believe the responsibility, to prevent what has the high potential to result in widespread atrocities," Ban said.

"On the basis of the options presented in this report, I call on the Council to authorize immediate and collective action to protect the civilian population from further violence and attacks," he wrote.

France has a small force in Bangui securing the airport and its local interests. French diplomatic sources have said France would be ready to provide logistical support and increase its troop numbers to between 700 and 1,200 if needed.

Central African Republic peace force not to fully deploy before 2014

Reinforcements have begun arriving for an African peacekeeping mission in Central African Republic but the planned 3,600-strong force will not be fully deployed before 2014, an official involved in talks on the crisis said.

The land-locked, mineral-rich nation has slipped into chaos since northern rebels ousted President Francois Bozize in March. U.N. officials and rights groups say both sides may have committed war crimes in the violence.

Former colonial power France has called on world powers to take action to prevent the country following Somalia's path to decades of lawlessness and efforts are focusing on beefing up a 1,100-strong African force that has long been deployed, Reuters reports.

"The force will reach 2,000 soldiers (in September) and hit 3,600 by January 2014," an official who took part in regional meetings hosted by Gabon told Reuters on Tuesday.

Further meetings are due to take place in Gabon later this week to decide on the leadership and make up of the force.

Moussa Fati Mahamat, Chad's foreign minister, said the force, to be known as MISCA, will have an African Union mandate to carry out more robust operations than the existing mission operated under Central Africa's CEEAC regional bloc.

Michel Djotodia, who swept to power at the head of the rebellion, was officially sworn in as the country's president last month but he has failed to contain waves of looting and killing by gunmen.

Djotodia last week sacked the head of the armed forces after days of clashes with fighters loyal to Bozize killed 100 people.

CAR is rich in gold, diamonds and uranium but decades of instability and the spillover from conflicts in its larger neighbors have left the nation's 4.5 million people mired in cycles of crises.