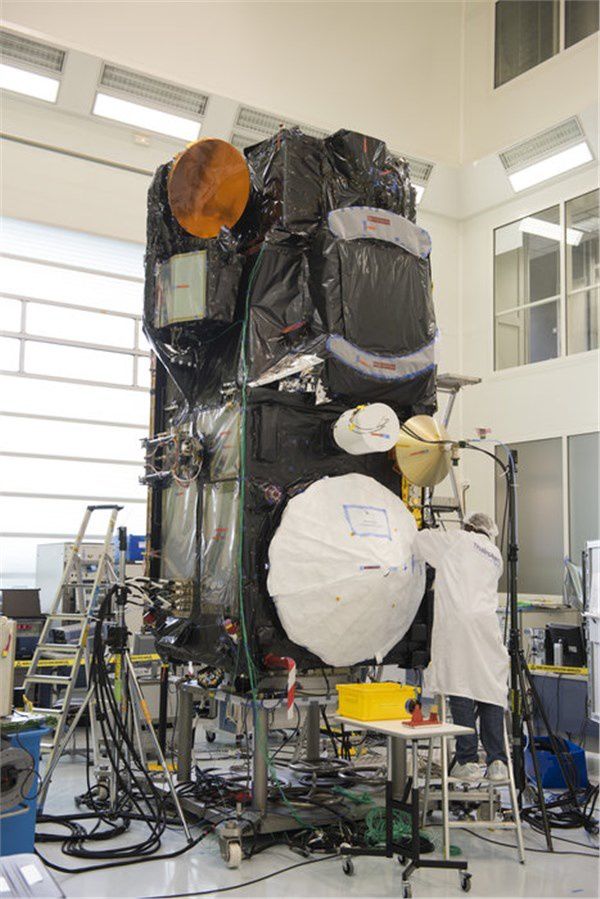 Before the latest satellite for Copernicus is packed up and shipped to the Plesetsk cosmodrome in Russia for launch at the end of the year, the media and specialists were given the chance to see this next-generation mission centre-stage in the cleanroom. Carrying a suite of state-of-the-art instruments, Sentinel-3 is set to play a key role in the world’s largest environmental monitoring programme – Copernicus. The European Space Agency's (ESA) Sentinel-2A earth observation satellite has completed testing and is preparing for launch on 12 June aboard a Vega rocket from Kourou space centre in French Guiana.

Sentinel-2A has also undergone space simulation tests in a thermal vacuum facility and other tests to determine its electromagnetic compatibility (EMC).

The satellite will be shipped to the European spaceport in April.

Built by Airbus Defence and Space, the Sentinel-2A is part of Sentinel-2 system, and is said to deliver high-resolution, multi-spectral earth observation data using 13 spectral bands with a resolution of 10m, 20m or 60m, and a swath width of 290km.

Other member of the Sentinel-2 system, Sentinel-2B is scheduled for launch in mid-2016. The Sentinel-2A and Sentinel-2B satellites will be designed to capture images of the entire land surface on earth in less than five days.

Airbus Defence and Space was selected as the prime contractor for five of seven Sentinel missions. The Sentinel-2 satellites will deliver optical images from the visible-near infrared to short-wave infrared range of the electromagnetic spectrum using a total of 13 spectral bands with a resolution of 10, 20 or 60 meters and a swath width of 290 km and will be used mainly in the areas of land use, soil sealing, land management, forest monitoring, natural disasters (floods, forest fires, landslides, erosion) and humanitarian aid.
Sentinel-2 is one of the European “Copernicus” programme satellites built under the industrial leadership of Airbus Defence and Space for the European Space Agency.

Cannes, March 31st, 2014 – The European Space Agency's Sentinel-1A satellite, designed and built by Thales Alenia Space, is ready to be launched from the Guiana Space Center in French Guiana, using a Soyuz-Fregat A launcher.

Sentinel-1A is the first satellite in Europe's vast Earth Observation program Copernicus (formerly known as GMES), coordinated by the European Commission, with the European Space Agency (ESA) in charge of the space component. It is designed to give Europe complete independence in the acquisition and management of environmental data concerning our planet, to support Europe's public policies.

Thales Alenia Space was named prime contractor for the Sentinel-1, with responsibility for the design, development, integration and testing of the satellites comprising these systems.

Based on the Prima platform, developed by Thales Alenia Space on behalf of the Italian Space Agency, Sentinel-1A will weigh approximately 2,200 kg at launch. It will observe the Earth from an altitude of 700 km, with a resolution between 5 and 25 meters, depending on the operating mode. The satellite will continuously provide users with images, taken day and night, under all weather conditions.

Data from the Sentinel-1A satellite will be collected by various European centers, and in Italy by the ground station at the e-GEOS space center in Matera (e-GEOS is an 80/20 joint venture of Telespazio and the Italian space agency).

The main goals of the Sentinel-1 mission are: mapping of urban areas, observing environmental impact, monitoring risks due to movements in the Earth’s surface, surveillance of the marine environment, maritime security, sea ice monitoring, monitoring of forests and climate change.

ESA is developing five Sentinel satellite families for the Copernicus program: Sentinel-1 is designed to ensure the continuity of ERS and Envisat radar data.

The second satellite in this mission, Sentinel-1B, is scheduled for delivery to ESA during the last quarter of 2015. It is now being integrated at Thales Alenia Space’s Integration Center in Rome, while the Sentinel-3A satellite, for which Thales Alenia Space is prime contractor, is about to complete its initial integration and test phase.

The company’s expertise is largely recognized in international markets, and has led to collaborative missions outside Europe, including with South Korea (Kompsat 5), India (Saral), Canada (Radarsat 2) and the United States (Topex, Jason, Calipso, GFO-RA), Russia (Sadko).

Thales Alenia Space is making a major contribution to Copernicus as prime contractor for the Sentinel 1 and Sentinel 3 satellites. At the same time, Thales Alenia Space continues to explore the vast possibilities offered by its advanced technologies to develop new applications: for instance, taking a closer look at the carbon cycle, another key factor in climate change.

Regarding defense or dual-use missions, Thales Alenia Space is the prime contractor for the Italian dual radar observation system, Cosmo SkyMed. A four-satellite constellation, the Cosmo-SkyMed system delivers data to government, military and private users. The system is now totally operational and has reached its optimum image acquisition capacity of about 1,800 images/day, day or night and in all weather conditions. These capabilities make the Italian observation system one of the most advanced and reliable systems of this type in the world. Thales Alenia Space is also developing COSMO New Generation.

Thales Alenia Space is the acknowledged European expert in high-resolution radar imaging. The company supplied the electronics for the radar instruments on the SAR-Lupe constellation of five satellites, which delivers high-resolution images of the Earth to the German Ministry of Defense.

Thales Alenia Space, a joint venture between Thales (67%) and Finmeccanica (33%), is a key European player in space telecommunications, navigation, Earth observation, exploration and orbital infrastructures. Thales Alenia Space and Telespazio form the two parent companies' “Space Alliance”, which offers a complete range of services and solutions. Because of its unrivaled expertise in dual (civil/military) missions, constellations, flexible payloads, altimetry, meteorology and high-resolution optical and radar instruments, Thales Alenia Space is the natural partner to countries that want to expand their space program. The company posted consolidated revenues in excess of 2 billion euros in 2013, and has 7,500 employees in six countries. www.thalesaleniaspace.com