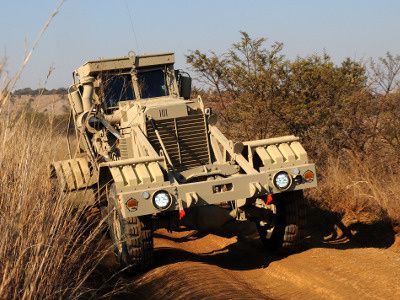 The Iraqi Ministry of Defence has purchased Husky 2G route clearance vehicles from DCD Protected Mobility in a deal worth more than R200 million, DCD has announced.

DCD Protected Mobility told defenceWeb that the contract will be completed by the end of March this year. It was awarded to Critical Solutions International (CSI), DCD Protected Mobility’s marketing partner responsible for selling, distributing and supporting DCD’s product worldwide.

“This procurement represents a critical enhancement of Iraq's route clearance mission and its ability to maintain freedom of manoeuvre and oppose ISIS and other forces within Iraq,” said Andrew Mears, DCD Protected Mobility Business Executive: Defence. "We are honoured to have been awarded this contract and are looking forward to working with the Iraqi Ministry of Defence to fully support this programme and any future requirements. The Iraqi government has determined that the Husky 2G is essential to defeating IED and mine threats and represents a noteworthy investment in saving lives and enhancing the capability of this significant new customer, the Iraqi military."

Over the past decade, the Husky family of vehicles has saved countless lives around the globe. Responding to the need for longer mission duration and enhanced detection capability, the Husky 2G two-operator variant was originally developed and delivered to the US Army. The addition of a second operator allows the Husky driver to focus on vehicle control and situational awareness, while the second operator monitors and analyses the advanced sensor systems and operational environment. The US Army recognised this life-saving vehicle design with an Innovation of the Year Award for 2010.

The Husky 2G is equipped with the NIITEK MMDS Ground Penetrating Radar and the FASCAN interrogation arm used to interrogate suspected mines and IEDs. It is also equipped with the TORC Robotics 360 Situational Awareness camera system and QinetiQ North Americas QNET, which provides the vehicle with lightweight protection from rocket-propelled grenades (RPGs). The upgraded Husky 2G features additional power and has the capability for future integration of additional sensors and enhancements, according to DCD.

The South African Army uses the Meerkat while the Husky system is being used by Canada, the USA, UK, France, Australia, Angola, Kenya, Uganda, Spain and Turkey. The Husky system had taken 7 000 hits in combat in Iraq and Afghanistan, with no mine or improvised explosive device fatalities.

A simulated landmine exploding under a Husky 2G during test

The Husky 2G surpassed blast requirements defined in STANAG 4569 — a NATO standard covering protection levels for occupants of logistic and light armoured vehicles during strikes from kinetic energy and artillery as well as IED blasts.

Andrew Mears, General Manager at DCD Protected Mobility, explained there is a basic requirement which needs to be met as well as a second higher requirement users of the vehicle would like to see met. “It is significant the Husky 2G surpassed this second requirement,” he said after the tests.

The Husky 2G route clearance vehicle is in service worldwide and has collectively been subjected to more than 6 500 landmine and IED strikes in the field with minimal operator casualties. Its ability to safely execute dangerous route clearance missions and return to base safely has attracted the loyalty and confidence of countless Husky operators.

DCD Protected Mobility invests a significant portion of its revenue into R&D to enhance the safety of vehicle operators and the survivability of the vehicle, the company said. The Husky 2G operators’ cabin successfully withstands Level 3 Kinetic Energy and Level 5 Artillery Threats as defined in the NATO standard. At Paardefontein the Husky 2G was also successfully subjected to Level 4a and Level 4b blast tests, in which 10 kg TNT surrogate mines were placed under the wheel and under the rearmost edge of the V-hull.

An instrumented seated anthropomorphic test device (ATD) was inside the Husky 2G during the tests. The ATD, which simulates the presence of a human operator, was fully clothed and fitted with military boots and socks. Various accelerometers, load cells and pressure sensors were installed on it and high speed cameras were positioned inside the cab to record body movement.

Not only did the Husky 2G vehicle successfully survive the stringent tests but more significantly, the vehicle could be repaired in the field an hour after the test. DCD said one particular Husky 2G vehicle underwent three detonation tests in three weeks and the vehicle has been repaired and will be utilised for further R&D projects.

The South African Army uses the Meerkat while the Husky system is being used by Canada, the USA, UK, France, Australia, Angola, Kenya, Uganda, Spain and Turkey.