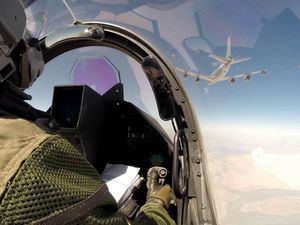 The National Space Security Policy sets out a coherent approach to the UK’s space security interests and outlines measures to make the United Kingdom more resilient to the risk of disruption to space services and capabilities, enhance our national security interests through space, promote a safe and more secure space environment and enable industry and academia to exploit science and grasp commercial opportunities.

Michael Fallon has visited British troops due to deploy on a major training exercise with NATO partner Poland.

Exercise Black Eagle is a significant demonstration of the UK’s support to the region, as the UK continues to play a leading role in delivering NATO’s measures to reassure eastern allies.

Troops from the UK have engaged in a series of exercises on eastern allied territory, the largest of which is Exercise Black Eagle, where around 1,300 troops will train with their Polish counterparts from 10th Armoured Brigade.

Speaking at the visit the Defence Secretary said:

I think it’s important for NATO forces to be seen to exercise together. We are stepping up the scale of these exercises, so there are more of them, they are more continuous, they are of a larger scale and they involve more and more forces from across NATO.

That’s what’s important. To show that NATO members are working together to carry out their responsibilities to defend each other from any kind of aggression.

Members of the King’s Royal Hussars and 1st Battalion The Royal Welsh met the Defence Secretary to demonstrate the vehicles and equipment they will operate on Exercise Black Eagle.

There is huge enthusiasm here for the task that they are being sent on. This is one of the most important allied exercises for years which will help reassure and demonstrate our commitment to our eastern allies. That’s what they train for, and that is what they are ready for.

This was a great opportunity to show the capabilities and readiness of this battle group. Most soldiers in my battle group returned from Afghanistan about 2 years ago, so in many ways our very intense training in Canada was the culmination of 2 years’ worth of getting back onto these complex armoured vehicles.

Although we are still committed in Afghanistan, there are significant parts of the Army concentrating on contingency operations, like training for conventional war in armoured vehicles, and we are looking forward to getting out to Poland to train alongside the Polish 10th Armoured Brigade.

The King’s Royal Hussars make up a large part of the deploying battle group alongside 1st Battalion The Royal Welsh. Over 100 armoured vehicles and 250 other vehicles will make up the deployment, including vehicles such as the Challenger 2 main battle tank and the Warrior armoured fighting vehicle.

Alongside these exercises, the UK is currently providing Sentry E3-D aircraft to NATO’s Baltic air policing mission and between May and August deployed 4 Typhoons to support the mission. The UK also participated in BALTOPS, a major allied maritime exercise in the Baltic.

A key architect of the air bombardment strategy in the Gulf War and Operation Iraqi Freedom said the U.S. military must have significant success with its efforts to destroy the Islamic State from the air.

On Wednesday night, President Obama’s announced that the U.S. will lead a coalition to step up targeted airstrikes against ISIL. As the mission shifts from humanitarian support and protecting U.S. personnel to more aggressive strikes aimed at a much wider set of targets, some analysts have  questioned if the U.S. will need ground combat troops or if air power will suffice.

The U.S. has utilized air bombing strategies to support friendly forces, such as the Iraqi Security Forces, hoping to advance on the ground.

Attacking ISIL is not similar to dismantling a country’s military such as the initial bombing campaigns in the Gulf War and Operation Iraqi Freedom. It’s more similar to the airstrikes the U.S. and allied forces have executed against insurgent and Taliban leaders in Iraq and Afghanistan over the past decade.

A dispersed group of fighters deliberately blending in with the civilian population and travelling in small groups in vehicles like pick-up trucks and armored vehicles has proven difficult or high-risk to pinpoint from the air with even the best precision-guided weaponry.

Even so, one of the authors of the air-power strategy called “effects-based” warfare, said using some of those same concepts may still apply when attacking a mobile insurgent terrorist group such as ISIL.

Retired Air Force Col. John Warden, known for his strategic involvement in creating and implementing effects based warfare, helped the George H.W. Bush administration prepare for the use of precision air-power in the Gulf War.

Effects based warfare is based on the premise that precision air power can achieve a particular strategic effect without necessarily attacking large numbers of fielded forces or the infrastructure of the attacked area.  Success is achieved by attacking and disabling the enemy’s centers of gravity, referred to by Warden as the five rings – leadership, system essentials, infrastructure, population, fielded military forces.

“The concept of the five rings says that anytime you have more than one person operating against you, such as a group, you have the formation of a system,” Warden told Military​.com in an interview.

“ISIL looks pretty straightforward,” he said, suggesting that some elements of effects-based warfare could potentially prove useful against ISIL should attacks continue, despite the fact that they are largely a guerilla force on the move and not a country or area with a fixed infrastructure.

The idea of effects-based warfare is to achieve what’s called strategic paralysis and render an enemy force unable to fight by targeting leadership headquarters, command and control and supply lines, Warden explained.

Avoiding civilian casualties through the use of strategy and precision technology from the air – all while preserving much of the infrastructure of the attacked area – is fundamental to effects-based warfare.  The advent of precision weaponry such as GPS and laser-guided bombs has, to a large degree, made this possible.

This approach proved quite successful during the Gulf War and opening attack or “shock and awe” conducted at the onset of Operation Iraqi Freedom. However, ISIL poses a much different challenge.

“Where we have had success it is not because we have killed every guy that has a bomb. It is because we have succeeded in destroying the ability of the opposition group to function in an organized and coherent way by attacking the leadership, attacking their communications, and attacking their supply lines —for the most part — without doing any significant damage to general infrastructure and little or no damage to the population that they are operating in,” Warden said.

The USS Bush carries as many as 44 F/A-18s, including both Hornets and the more technically advanced Super Hornets. Navy Hornet and Super Hornet pilots have been flying surveillance missions over Iraq for weeks, in part to use their on-board electro-optical cameras and infrared sensors to identify potential ISIL targets. These missions were done in anticipation of a potential order to conduct strikes, defense officials said.

F/A-18s are configured with a host of air-to-air and air-to-ground weapons such as GBU-54 500-pound laser-guided bombs, some of which were dropped near Irbil, Iraq, against ISIL mobile artillery targets. Laser-guided bombs can be guided by a laser-designation from the air or nearby ground forces.

Many of the bombs, such as the GBU 54s dropped in Iraq are known as Laser Joint Direct Attack Munitions or LJDAMS. Many JDAMS also rely on GPS guidance to pinpoint their targets.

The GBU 54 is a 581-pound glide bomb with a range of up to 15 nautical miles, service officials said. The weapon uses semi-active laser guidance as well as GPS and inertial navigation systems.

This is the reason the GBU-54 was engineered; it is a dual-mode precision-guided bomb designed to destroy fixed and re-locatable or moving targets, service officials said.

In the Arabian Gulf, the USS Bush is joined by the USS Philippine Sea, a cruiser and two destroyers, the USS Roosevelt and USS O’Kane.

An Israeli company that spent a decade developing an autonomous, unmanned vertical takeoff and landing craft utilizing internal lift rotors says its first prototype is now going through flight tests and it’s at work on a second prototype.

Called the AirMule, the rotorcraft is envisioned for use as an unmanned transport – ferrying supplies into a combat zone or taking out wounded – operating in areas where helicopters and fixed-wing planes cannot.

The Air Force plans to award a contract to build its new bomber to a single vendor by next spring or summer as part of its ongoing effort to engineer a stealthy long range bomber that can evade advanced air defenses, service leaders said Sept. 15 at the Air Force Association Air and Space Conference at National Harbor, Maryland.

“We’re about ready to enter into the next phase of the bomber. We’ve spent the last couple of years refining the requirements and maturing the technology. Within the next year we will down-select to one contractor and then start the heavy lifting of building the first bomber and testing,” Lt. Gen. Ellen Pawlikowski, military deputy for Air Force acquisition, told Military​.com in an interview.

The Air Force does not have a suitable replacement for the planned divestiture of the A-10 Warthog aircraft and U-2 spy plane, senior service leaders said Sept. 16 at the Air Force Association Air and Space Conference, National Harbor, Md.

“I don’t want to cut the A-10 and the U-2 – we don’t have a replacement,” said Gen. Michael Hostage III, Commander, Air Force Air Combat Command.