As of 1 October, the European Defence Agency (EDA) has taken over the provision of Satellite Communications (SatCom) services for the EU Training Mission (EUTM) in Somalia.

EUTM Somalia is the first CSDP military mission to draw on the option of the Agency to cover its requirement for SatCom services. Earlier this year, Athena - the mechanism established to finance CSDP military operations - joined the Agency’s EU SatCom Market as part of its efforts to improve the procurement process of the different operations.

Through the Agency, the mission benefits from a strategic link between Somalia and Europe. The services include rental, shipping and installation of a C-band remote terminal in Mogadishu International Airport as well as a high data rate unclassified satellite link with anchoring in Europe. The services include also 24/7 technical support and on site-intervention if required.

In the coming months, the Agency will also take over the provision of Mobile Satellite Services for the operations EUNAVFOR Atalanta, EUTM Mali and EUTM Somalia as well as ATHENA Central.

Speaking about the cooperation, Brigadier General Antonio Maggi, EUTM Somalia Operation Commander said: “Thanks to the excellent cooperation between the EUTM J6 team, EDA and the contractor, EUTM Somalia will benefit from a reliable and secure connection with Europe for its Command and Control chain.”

EDA’s Chief Executive, Jorge Domecq added: “Supporting CSDP operations is one of the core missions of the EDA. I am confident this first example will pave the way for other CSDP military operations to make extensive use of all the support the Agency can provide.”

On 10 April 2010, the European Union launched a military training mission in Somalia (EUTM Somalia) in order to contribute to strengthening the Transitional Federal Government (TFG) and the institutions of Somalia. This support is part of the EU's comprehensive engagement in Somalia, which aims to support stabilising the country and to respond to the needs of the Somali people.

Since 2010, EUTM Somalia has contributed to the training of approximately 3,600 Somali soldiers with a focus on the training of Non-Commissioned Officers (NCOs), Junior Officers, specialists and trainers.

Within the EU SatCom Market project, EDA acts as the central purchasing body on behalf of the contributing members. It purchases the services from a commercial provider. The project uses a ‘pay-per-use’ model, so members do not have to contribute with regular fees, instead they only pay for what they order. Since May 2013, 24 orders have been passed for a total value of around €4 million. Austria, Belgium, Cyprus, Finland, Germany, Greece, Italy, Luxemburg, Portugal, Romania, the United Kingdom and the Athena Mechanism are members of the project. Further participation is open to all EDA participating Member States as well as all entities entitled to take part in Agency activities.

Athena is the mechanism established to administer the financing of the common costs of European Union operations having military or defence implications governed by Council Decision 2015/528/CFSP. The Council Decision allows for arrangements to be signed with union bodies to facilitate procurement in operations in the most cost-effective manner. The European Union has extended the EU training mission in Somalia (EUTM Somalia) until 31 December 2016 as it continues to providing basic, leadership and specialised military training and advice to the Somali military.

The decision was announced on March 16. EU High Representative for Foreign Affairs and Security Policy Federica Mogherini said: "The EU training mission has already made a real difference in Somalia by training around 5000 Somali troops. It will gradually shift towards mentoring Somali trainers, enabling the Somali National Army to progressively take over their own training. This will contribute to supporting Somalia's efforts to bring security and stability to the country."

The EUTM has been training Somali personnel since 2010. EUTM's efforts have contributed to the development of civilian control over the armed forces and to the management of the Ministry of Defence, as well as to the preparation of a Defence Plan within the overall context of public service, the EU said, adding that the mission's move from Uganda to Mogadishu in early 2014 greatly facilitated this work.

The EUTM Somalia is part of the EU's comprehensive approach to Somalia, which comprises diplomatic efforts, development support, humanitarian aid as well as security engagement. It includes two complementary missions under the EU's Common Security and Defence Policy: EUNAVFOR Operation ATALANTA contributing to fighting piracy off the Somali coast and EUCAP Nestor for maritime security capacity development in the Horn of Africa and the Western Indian Ocean.

EUTM Somalia was launched in December 2010 and has been based in Mogadishu since 2014. Brigadier General Antonio Maggi, from Italy, has been appointed Mission Commander as of 8 March 2015, heading a team of 125 staff. General Patrick de Rousiers, Chairman of the European Union Military Committee paid a visit to the Headquartes of the  European Union Training Mission in Somalia and attended meetings with the military leadership of Somalia and some international EUTM Somalia partners.

General de Rousiers and his delegation have been welcomed by the EUTM SOMALIA Mission Commander, Brigadier General Massimo Mingiardi, and his staff, which also provided a briefing on EUTM Somalia achievements since the Chairman last visit to the Mission in April 2015, and an overview of the situation in Somalia.

In the morning, General de Rousiers met Ambassador Michele Cervone D’Urso, EU Special Envoy for Somalia, for an exchange of view on the Mission, and then, accompanied by his delegation, General Mingiardi, and a party from EUTM Somalia, visited the Somali Defence General Staff in Gashandiga, where during a meeting  with the Senior National Advisor to the President, Mr. Abdirahman Sheik Issa, the Chief of Defence Forces, General Dahir Elmi, the Deputy Chief of Defense Forces, Brigadier General Abdirizakh Elmi, the Commander of the Somali Navy, Admiral Madeey Nur Ufurow, the Somali Chief of the Air Force, General Mohamed Sheikh Ali, and the Advisor to the CDF, General Sheik Sala, for an exchange of views and an update on the situation.

The activities included a visit to Jazeera Training Camp, to the infrastructures of EUTM Somalia in the International Campus within the Mogadishu International Airport, during which the EUMC Chairman met EUTM personnel.

The official meetings continued with briefings provided by other key partners in Somalia such as the United States CJTF for the Horn of Africa Military Coordination Cell (MCC), and the United Kingdom Military Support Team (MST). 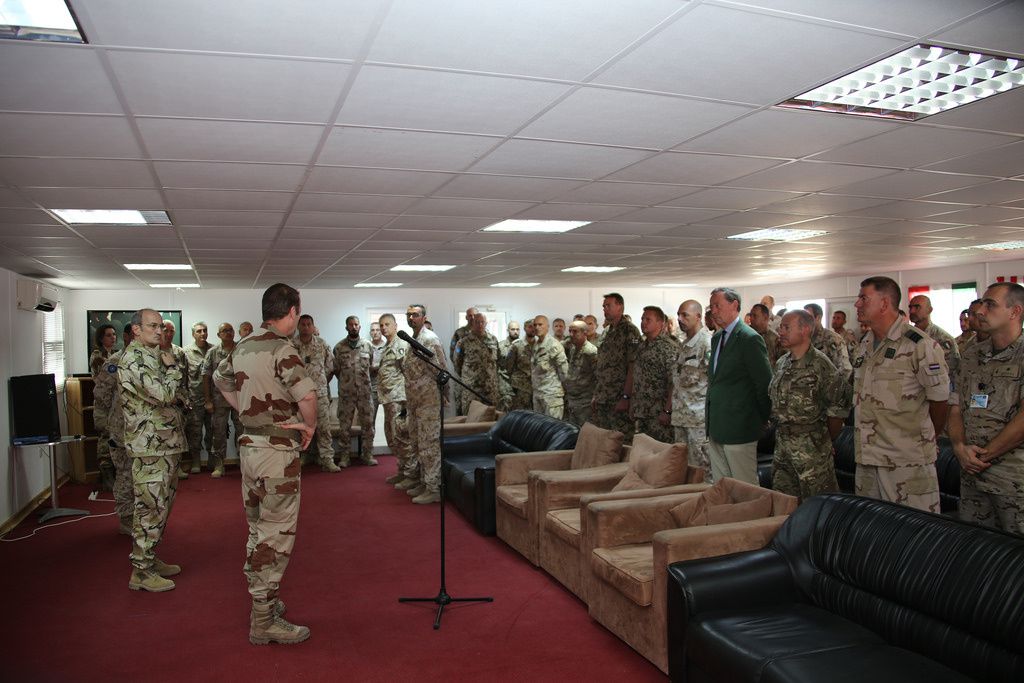 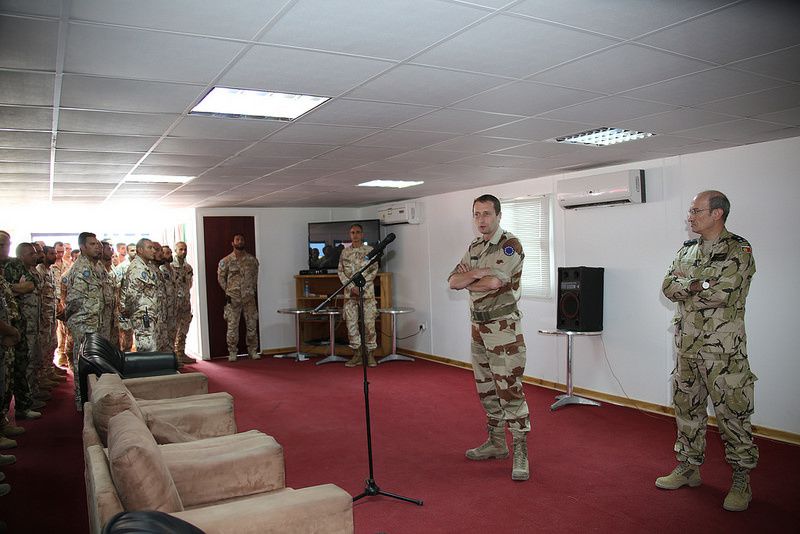 General Maggi, from Italy, takes up his duties on 8 March 2015. He will succeed Brigadier General Massimo Mingiardi, who had been in the position since December 2013.

EUTM Somalia, launched in spring 2010, is part of the EU's comprehensive approach for a stable, democratic and prosperous Somalia and embedded in the EU strategic framework for the Horn of Africa. It has contributed to training over 4.000 Somali troops so far, with a special focus on officers, specialists and trainers.

The mission delivers political and strategic advice to the Somali ministry of defence and the chief of defence forces on security sector development. It also advises on military training so as to lay the foundations of a Somali-owned military training system. Since January 2014, the mission has been based in Mogadishu, Somalia.

The decision was taken by the Council's Political and Security Committee.