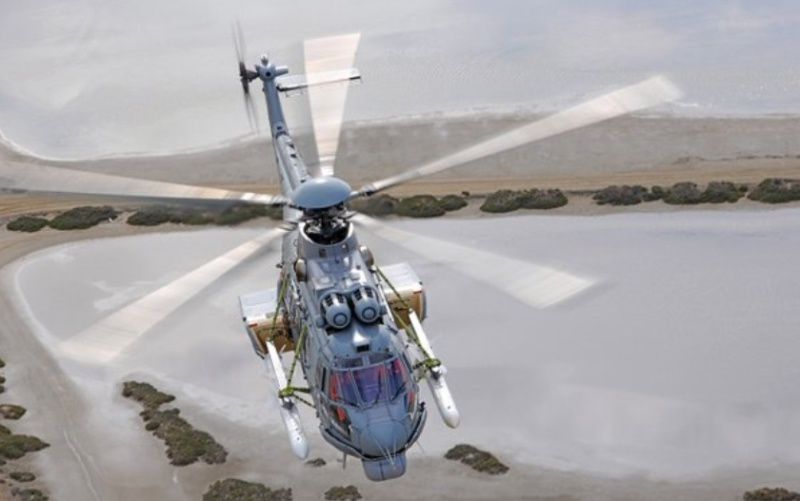 Armed with two AM-39 Exocet long-range anti-ship missiles, the Airbus H225M Caracal is arguably the most powerful naval strike helicopter presently in service, and will give the Brazilian navy an unprecedented anti-ship firepower. (Airbus HC photo)

Helibras this week concluded the first phase of the integration tests of the AM39 Exocet missiles and the naval mission system developed especially for operational version of the H225M helicopter of the Brazilian navy. During the three weeks of activities in the laboratory, the team successfully completed several simulated firing of the missile.

This phase of testing was performed to validate the connection between the Naval Mission system and the missile launchers, to test different modes of operation, to verify the control logic and check the test instrumentation that will be used during the flight trials.

In early 2016, bench analysis will resume for the missiles to be flight-tested on the prototype aircraft, in Brazil. These activities are being coordinated by teams of Helibras Engineering Center and Airbus Helicopters professionals as well as MBDA, maker of the AM39 Exocet missile, Atech and Airbus Defence and Space.

"This was another stage planned in our schedule of work and shows the commitment of Helibras to the H-XBR program, as well as the increased training of its professionals and its plant in Brazil," said Richard Marelli, Helibras vice president of Operations.

The successful integration of the systems also demonstrates the maturity of the development of H225M and of the Naval Mission Systems for the Navy of Brazil, which has a completely new layout, designed in Brazil by Helibras, together with the customer, Airbus Helicopters and partner companies

A Buyers Market For Anti-Ship Missiles

There was recently a SINKEX (sinking exercise) in which Norway fired one of their locally made Naval Strike Missiles (NSM) at a decommissioned 2,100 ton Oslo class frigate. The NSM, fired from a smaller missile boat, hit the frigate, did a lot of damage but did not sink it. If the frigate had been loaded with fuel and ammo, the NSM would have started fires and probably put the ship out of service and possibly caused it to go down.

Despite the many lightweight (under a ton) anti-ship missiles on the market, NSM still gets sales because it is effective, reliable and affordable. It is also offered for use on ships, aircraft and on trucks (as part of a mobile coastal defense system). The 409 kg (900 pound) NSM anti-ship missile has a 125 kg (275 pound) warhead and a range of 185 kilometers. NSM uses GPS and inertial guidance systems, as well as a heat imaging system (and a database of likely targets) for picking out and hitting the intended ship. Norwegian manufacturer Kongsberg allows buyers to easily install their own radar and control systems.

There is lots of competition, the main ones being the U.S. Harpoon and similar missiles from Russia and China. The Russian Kh-35 anti-ship missile is similar to the American Harpoon but lighter (610 kg/1,340 pounds, compared to 728 kg/1,600) and has less range (130 kilometers compared to 224 for the latest version of Harpoon). The Kh-35 (also known as the SS-N-25 or Switchblade) can be fired from helicopters, aircraft, ships, or shore batteries.

The new Exocet MM Block 3 has twice the range (180 kilometers) because of their turbojet engine. This is a 670 kg (1,500 pound) missile that has been around for over three decades, has been proven in combat and is known to be reliable. The C802 is known to be less capable than the Exocet, but it looks similar.

Russia pioneered the use of larger (up to three ton) supersonic “carrier killer” anti-ship missiles. The most common example is the Yakhont which is an 8.9 meter (27.6 foot) long, three ton missile with a 300 kg (660 pound) warhead. Russia has been building missiles like this since the 1970s but they are only popular with the few nations that have a need to destroy American aircraft carriers.

MBDA’s arsenal on display at DefExpo

The Fire Shadow launched at Vidsel in Sweden in 2010.

The French defense company MBDA is planning to display a wide range of weapons systems from its product line at DefExpo, including the Mistral VSHORAD, the Mistral ATAM for the Indian Army’s Advanced Light Helicopter (ALH) Dhruv Mk IV WSI (Weapons System Integrated), as well as their PARS 3 LR anti-tank guided missile system, which is also being considered for the Dhruv.

MBDA is proposing the Mistral as a solution for India’s VSHORAD requirement to replace the existing Igla systems. MBDA says, the Mistral missile has a 96% kill probability over 4, 000 firings and can be effective against ‘a host of air threats, ranging from cruise missiles and combat jets flying at supersonic speeds to pop-up helicopters’. It is operated by 39 customers in 27 countries and can be fired from launchers mounted on tripod, vehicle, naval platform and helicopters.

A company statement quoted MBDA India country head, Loïc Piedevache, as saying, “Our stated strategy in India is to link and to work with local industry and to advance technology transfer wherever feasible. So should Mistral MANPADS be selected, we are exceptionally well positioned to get local production capability of the Mistral missile up and running as soon as required. This could of course be a single Mistral production line in India for both the Dhruv’s air–to-air Mistral ATAM system which is currently being integrated and for the surface to air requirement”.

The PARS 3 LR on the Eurocopter Tiger. Copyright: MBDA

The fire-and-forget PARS 3 LR is being pitched to service the air-to-ground requirement of the Dhruv helicopter. MBDA says the system has been ‘developed for engaging mobile and stationary targets equipped with the latest generation of armor protection, field fortresses, bunkers and other high-value targets.’

While the German Army’s Eurocopter Tiger helicopters operate a quad launcher for the PARS 3 LR, the Indian requirement is for a twin-launcher, currently being designed with Indian industrial partners. Piedevache says, “We are already working closely with an Indian company on the design of a specific PARS launcher for the Dhruv. Should we get the go ahead, another Indian partner will be lined up to carry out launcher production”.

A full-scale model of MBDA’s Medium Range Air Defense missile, ASTER 30, will also be on display. The missile, which is operationally deployed on ground and naval platforms in three countries, is said to offer ‘high-level tactical and strategic mobility and with its high rate of fire is capable of countering the most demanding of saturating threats’. The company says the ASTER 30 can pull up to 60 G plus an additional 12 G lateral acceleration ‘automatically commanded by the missile in order to achieve a direct hit on the target’. The French Air Force used it to successfully intercept a ‘target representative of a ballistic missile’ last November.

The company is also putting up a model of its response to the Indian Army Request for Proposal for Loitering Munition, the Fire Shadow. Ordered by the British Army, the MBDA says it can be ‘targeted by a range of ISTAR (Intelligence, Surveillance, Target Acquisition and Reconnaissance) systems, for example a forward observer with binoculars or a sophisticated system such as a UAV and is surface launched from a highly mobile launch unit’.

The Fire Shadow is a platoon or company level precision weapon that brings the human element into the picture, targeting ‘time-sensitive ground targets’ in the ‘absence of readily available air-support’. , The system satisfies the requirement to have man-in-the-loop control in the complex battlefield in the fog of war, ‘where the target might only make fleeting appearances before taking cover’.

MBDA says the Fire Shadow can fly directly to the target and carry out its precision strike at ranges of greater than 100km. ‘However, what makes Fire Shadow special is that should the intended target disappear, or should the operator decide to delay the attack until further target information becomes available, the weapon can be positioned to loiter over the suspected target area for around six hours. An operator remains in permanent control of Fire Shadow from a control centre using special software that provides real-time situational awareness, vital for complex urban scenarios where collateral damage could be an issue’. MBDA will also be showing off the anti-ship missiles like the entire Exocet family, which includes surface, submarine and air-launched variants, with the latest variant, the Exocet MM40 Block 3 with its 170 km range and littoral land attack capability. The Exocet SM39 has already been ordered for India’s Scorpene submarines. MBDA has sold around 4,000 of this family to global customers.

A little smaller, the French company’s Marte MK2/S, with its active RF seeker for maritime targets at ranges of 30 to 40 kilometers, though suitable for fixed-wing aircraft depending on altitude, has been optimized for the NH90 helicopter, which is competing in the Indian Navy tender for Multi Role Helicopters (MRH).

Besides these, also on display will be the MICA, already being purchased by the Indian Air Force (IAF) for the Mirage 2000 upgrade, the ASRAAM, on offer for the IAF’s Jaguar aircraft, the Dual Mode Brimstone and the Storm Shadow/SCALP cruise missile which earned a name for themselves in the Libya operations, last year, in addition to the Meteor BVR (Beyond Visual Range) air to air missile MBDA's SCALP EG and SCALP Navale are in production, and exports are playing a large role in the company's future. Saudi Arabia has purchased the Storm Shadow for its Tornado fighters, and the sales of Rafale fighters and FREMM frigates should boost demand for this missile.

MBDA is planning to upgrade the SCALP EG with an enhanced version to meet France's and the U.K.'s requirements for long-range and strike missiles. The new missile's range could exceed 1,000 kilometers.

France's Exocet anti-ship missile is one of MBDA's most popular products. The Block 3 Exocet has greater range than the solid-fuel-propelled Block 2 and can also engage land-based targets. Sales to Middle East countries have been a large source of business for MBDA.

Saab Bofors' RBS15 is an anti-ship missile that has been purchased by Sweden, Germany, Poland and Thailand. Several other navies are considering the missile, which may provide a near-constant stream of contracts from 2011-2020.

Composite Engineering's BQM-167 Skeeter drone is powered by the TRI 60, and has been purchased by the U.S. Air Force and Navy. The USAF is replacing its legacy BQM-34 and MQM-107 drones with the Skeeter.