An F-35C Lighting II makes an arrested landing aboard USS Dwight D. Eisenhower (CVN 69) October 2, 2015, operating off the east coast of the US. The F-35 Lightning II Program is conducting its second developmental test (DT-II) at sea. While aboard Eisenhower from October 2-15, the Pax River Integrated Test Force (ITF) will test F-35C carrier suitability and integration in the at-sea environment. The test team will achieve this objective through a series of test events designed to gradually expand the aircraft operating envelope at sea. Shipboard testing delivers the opportunity to conduct routine F-35C operations while embarked on an aircraft carrier. The F-35C will perform a variety of operational maneuvers during DT-II — including catapult takeoffs and arrested landings — while simulating maintenance operations and conducting general maintenance and fit tests for the aircraft and support equipment.

F-35C Conducts First External Weapons Release with Not One, but Four 500-pound Bombs 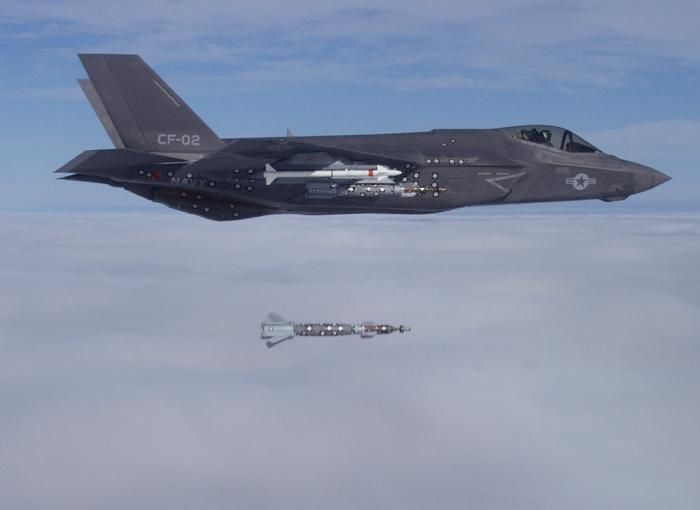 The aircraft, CF-2, released four 500-pound GBU-12 laser guided inert bombs from its wings’ pylons during consecutive test runs over the Atlantic Test Range. The F-35 Patuxent River Integrated Test Force conducted the flight and noted all four weapon separations were successful and confirmed the accuracy of the predicted release trajectory. The ability to do quadruple separation tests during a single flight demonstrates the program’s ability to efficiently test, and advances the F-35’s future capability to release multiple weapons on a single pass.

During the sortie, flight test engineers monitored and reviewed telemetry data from each GBU-12 separation event to confirm it was safe to proceed to the next release point. The team also saved costs by clearing the range once rather than four times to accomplish each separation.

Traditional flight test programs often rely upon a series of individual separation flights to accommodate engineering analysis to determine if it is safe to proceed to the next test point. The F-35 weapons certification process combined extensive wind tunnel testing and computer analysis to predict the trajectory of the weapons released from the aircraft. Additionally, the F-35 features an on-board instrumentation capability that delivers real-time data analysis to engineers in the control room. Each weapon separation matched simulation models with a high degree of fidelity, which expedites the clearances of future weapons and employment envelopes. 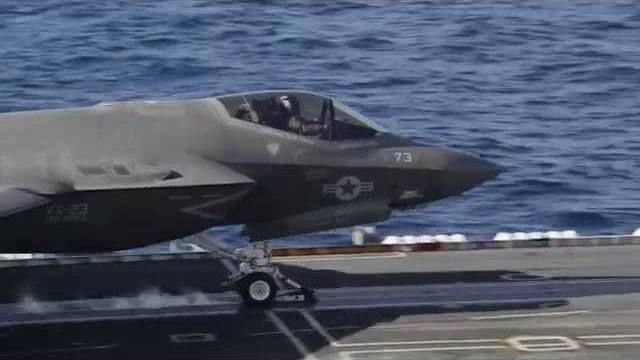 Hear from the U.S. Navy pilots and maintainers that were aboard the USS Nimitz for the F-35C sea trials in November 2014. Learn more: http://www.f35.com/nimitz 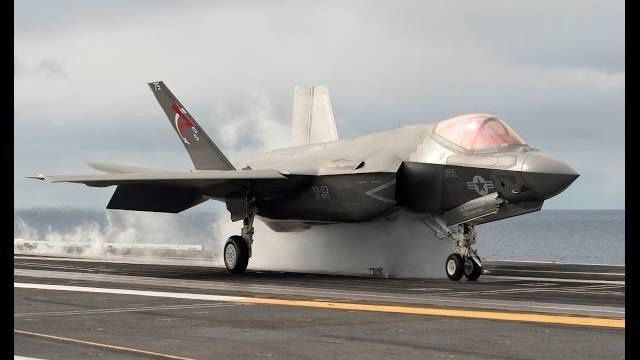 The F-35C successfully completed its first phase of sea trials three days early aboard the USS Nimitz. The cadre of F-35C test pilots logged a total of 39.2 flight hours as they conducted 33 flights featuring 124 catapults, 124 arrestments and 222 touch and go landings.

The F-35C completes catapults and arrestments aboard the USS Nimitz during Developmental Testing I (DT-I), which is the first of three at-sea test phases planned for the U.S. Navy's F-35C carrier variant. Lockheed-Martin Photo

PACIFIC OCEAN (Nov. 4, 2014) F-35C Lightning II carrier variant Joint Strike Fighters launch from the aircraft carrier USS Nimitz (CVN 68) off the coast of San Diego. The launches and recoveries are part of initial at-sea Developmental Testing I (DT-I) for the F-35C, which commenced Nov. 3 and is expected to last two weeks. The F-35C is the carrier variant (CV) of the F-35 Lightning II Joint Strike Fighter designed for the U.S. Navy as a first-day-of-war, survivable strike fighter complement to the F/A-18E/F Super Hornet. (U.S. Navy video/Released)

First Days of F-35C Sea Trials Aboard the USS Nimitz

The F-35C Lightning II carrier variant completes the first catapult launch from the aircraft carrier USS Nimitz off the coast of San Diego during initial at-sea Developmental Testing I (DT-1). Learn how the F-35C operates at sea: http://bit.ly/10yEQOy

F-35: The Complete Guide to the Joint Strike Fighter

This guide is designed to give you an overview of the F-35 variants, some of the new technologies the JSF is adopting and which countries and companies are participating in the programme.

Lt Gen Christopher C. Bogdan, the Program Executive Officer for the F-35 Lightning II Joint Program Office, has been confirmed as a speaker at the International Fighter conference, taking place in London in November.

Navy to Test F-35C on Carrier This Fall

The U.S. Navy for the first time will begin testing its version of the F-35 fighter jet from an aircraft carrier this fall, according to the No. 2 official in charge of the program.

Rear Adm. Randy Mahr, deputy director of the Defense Department’s Joint Strike Fighter program, didn’t specify a date or ship for the upcoming evaluations. But he spoke confidently of the planned milestone for the F-35C, the Navy variant designed for taking off from and landing on carriers.

“It’s going to be the year of the F-35C,” he said during a briefing at the Navy League’s Sea-Air-Space conference on Monday in National Harbor, Md.

Mahr acknowledged hardware and software problems that have plagued the three versions of the aircraft being developed by Lockheed Martin Corp., from a tailhook that didn’t catch the arresting cable to a bulkhead that cracks to logistics software that improperly grounded jets. In February, the program office discovered that an engine fan blade “came apart” into pieces, he said.

But the issues have either been resolved or are in the process of being fixed and won’t threaten the Marine Corps’ plans to begin in July 2015 operational flights of the F-35B, Mahr said. That version is designed for short takeoffs and vertical landings, meaning it can fly like a plane and land like a helicopter.

Corps leaders last week hinted to lawmakers that the aircraft may not meet that date.

“We are tentatively behind schedule,” Gen. John Paxton, the assistant commandant, told lawmakers during an April 2 hearing of the Senate Subcommittee on Seapower. “The IOC is forecasted for July 2015,” Paxton added, referring to the date for initial operational capability. “We have every expectation that could be delayed by several months. It will continue to be conditions based.”

Lt. Gen. Kenneth Glueck, who heads up the Marine Corps Combat Development Command, also said at the hearing that the Corps would not declare IOC until the software is developed to meet the requirements of the service.

The Government Accountability Office, known as the investigative arm of Congress, in a March 24 report cited an assessment made by the Pentagon’s own director of operational test and evaluation that software problems could delay delivery of the aircraft’s most advanced technology by 13 months.

When asked specifically about F-35B operational flights, Mahr said, “the Marines have not expressed any concerns at all about the IOC in 2015.”

The F-35B operational flights will rely on a less robust version of software, known as 2B, designed to provide basic close-air support and fire such weapons as the Advanced Medium Range Air to Air Missile, or AMRAAM, and Joint Direct Attack Munition, or JDAM. Both weapons have been successfully test-fired from the aircraft, Mahr said.

“We expect to be able to show that that software is ready to deploy,” he said, adding that two more software upgrades, or “drops,” are scheduled for the next two months.

Mahr acknowledged “some challenges” with the more robust version of software, known as 3F and designed to provide the full suite of war-fighting technology, which is scheduled for delivery in 2017.

“We think we have four to six months of risk on that end,” he said. “We’re doing everything we can to meet that date.”

The program office has also made improvements to the Autonomic Logistics Information System, or ALIS (pronounced “Alice”), which determines whether the plane is safe to fly. A recent software upgrade to the system has drastically shortened the time it takes maintainers to load a webpage, to about 30 seconds from about five minutes, Mahr said.

Making the Most of The F35 B

One of the fundamental changes in SDSR 2010 was to select the F35C over the F35B. The rational for this was that the F35C could also replace the Tornado and cover the RAF’s Future Offensive Air System requirement as well as the Joint Combat Aircraft requirement designed to replace the Harrier. However once it became clear that the cost of converting the aircraft carriers would be in the £ 5 billion pound range the decision was taken to revert back to the B model. However despite the decision to revert back to the B model no decision was taken to replace the Tornado with something else. The F35B will now have to serve as both a Harrier replacement and a Tornado replacement.

During the testing, the aircraft, also known as CF-1, successfully refuelled with a USAF's Boeing KC-135 Stratotanker aircraft.

After completing this testing, the aircraft now joins the A and B models in proving that all three variants of the F-35 are capable of refuelling from a common tanker platform, despite their different methods.

The aircraft is also being developed in two other variants, conventional takeoff and landing (CTOL) variant for the US Air Force, and a short takeoff and vertical landing (STOVL) aircraft for the US Marine Corps and UK Royal Navy.

Powered by a single Pratt and Whitney F135 turbofan engine, the F-35C can fly at a maximum speed of 1,960km/h and can be launched through a steam catapult and recovered by using a tailhook arrestor.

VFA 101 will train aircrew and maintenance personnel to operate and repair the F-35C aircraft for the US Navy.