The American firm that makes the 1.1 ton Predator and 4.7 ton Reaper UAVs is developing a maritime patrol kit for the Reaper. It takes about 12 hours to install the maritime patrol kit which includes maritime search radar, sonobuoys and the ability to transmit data collected by the sonobuoy sonar back to land or airborne analysts for further processing. Also carried are Hellfire missiles that can be used against surfaced submarines or small warships. The maritime reaper would be able to fly to a spot more than 3,000 kilometers off shore, patrol the area for up to ten hours and then return. This new maritime patrol kit was developed in an effort to get a contract with the British Royal Navy to provide maritime patrol UAVs the British are seeking. This would provide a maritime patrol at less than half the cost of the larger U.S. Navy RQ-4B Triton UAV.

The Reaper already has some experience with maritime reconnaissance. In 2009 several MQ-9s were sent to the Seychelles (a group of 115 islands 1,500 kilometers from the east African coast) to aid in the anti-piracy patrol. This apparently was successful enough to encourage further work in this area. At the same time Israel was using a Predator size UAVs (the Heron) equipped with a synthetic aperture radar and onboard software to provide automatic detection, classification and tracking of what is down there on the waters off the Israeli coast. Human operators ashore, or on a ship or in an aircraft, are alerted if they want to double check something the software was programmed to consider suspicious. Operators used video cameras on the Heron to determine exactly what was down there. Also carried are sensors that track the sea state (how choppy it is). Israel still uses this version and has sold some to India.

Meanwhile the U.S. Navy has five of the 13 ton RQ-4B Triton UAVs in service since 2012. These are modified RQ-4B (Global Hawk) UAVs that began operational testing in 2010. The Triton was assigned to operating with a carrier task force at sea. Circling above the task force at 22,500 meters (70,000 feet), Triton monitored sea traffic off the Iranian coast and the Straits of Hormuz. Anything suspicious was checked out by carrier or land based aircraft, or nearby warships. The Triton aircraft can fly a 24 hour sortie every three days. The first production Triton was delivered in late 2012. In 2009, the first year of Triton testing consisted of 60 flights and over 1,000 hours in the air. The flights were over land and sea areas, even though the UAV sensors are designed mainly to perform maritime reconnaissance.

The Navy is buying the Tritons for over $60 million each. This version is larger (wingspan is 5 meters/15 feet larger, at 42.2 meters/131 feet, and it's nine percent longer at 15.5 meters/48 feet) than the A model and can carry more equipment. To support that, there's a new generator that produces 150 percent more electrical power. The RQ-4 has a range of over 22,000 kilometers and a cruising speed of 650 kilometers an hour.

The first three RQ-4Bs entered service in 2006. At 13 tons the Global Hawk is the size of a commuter airliner (like the Embraer ERJ 145) but costs nearly twice as much. Global Hawk can be equipped with much more powerful and expensive sensors, which more than double the cost of the aircraft. These "spy satellite quality" sensors (especially AESA radar) are usually worth the expense because they enable the UAV, flying at over 20,000 meters (62,000 feet), to get a sharp picture of all the territory it can see from that altitude. The B version is a lot more reliable. Early A models tended to fail and crash at the rate of once every thousand flight hours. 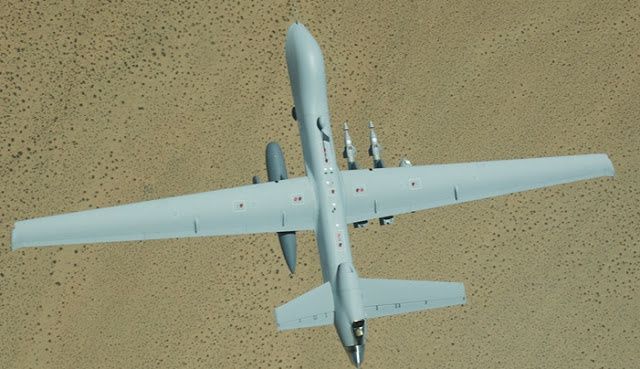 “Reaper ER provides a tremendous capability increase in both range and endurance, and achieving this major program milestone wouldn’t have been possible without the dedication and commitment of our employees,” said Frank W. Pace, president, Aircraft Systems, GA-ASI. “We are pleased that the Reaper ER program has met the expectations of our Air Force customer and satisfied the enormous challenge of their Quick Reaction Capability [QRC] schedule requirement.”

A Reaper can be transformed into a Reaper ER through the integration of a field-retrofittable modification package consisting of two wing-mounted fuel tanks which significantly extend the aircraft’s maximum endurance. Reaper’s original external payload carriage configuration remains unchanged, providing the aircraft with a “mix and match” capability that allows it to carry both fuel tanks and an assortment of external payloads. To increase thrust and improve takeoff performance at higher gross weights, an alcohol/water injection system and a four-bladed propeller were incorporated, along with a heavyweight trailing arm landing gear system that enables safe ground operations at the heavier gross weight.

The Reaper ER program was a QRC requirement in support of USAF which challenged GA-ASI to deliver 38 Reaper ER aircraft in 13 months, and to be operational 18 months following contract award. The ER modification package was designed to be field-retrofittable so that fuel tanks and associated equipment could be installed quickly and conveniently on current Reapers at worldwide locations.

In related news, GA-ASI announced that Reaper ER has earned the company an honor from Aviation Week, with the company being named as a finalist for the 2015 Program Excellence Awards in the category of System. Reaper ER was selected for GA-ASI’s efforts to introduce unique and innovative changes to standard production programs in the execution of the aircraft’s production, including an innovative approach to leading and managing a QRC that implemented a disciplined production environment to meet a very challenging schedule. The company also was recognized for partnering with the U.S. Government to streamline the production line and adjust tools and processes to improve the execution of the program.

“This year’s Program Excellence submissions provided a wealth of lessons learned and best practices, from driving down cycle time and affecting the learning curve to process innovations that allow program teams to work smarter and achieve better results,” said Carole Hedden, Program Excellence editorial director for Aviation Week. “Our evaluation team of program experts narrowed the field from 72 original nominations to a field of 23 finalists who exemplified the best in creating value, adapting to complexity, team effectiveness, and producing results.”

The winners of the Program Excellence Awards will be announced November 4 in Scottsdale, Ariz.

High-resolution photos of Reaper ER are available to qualified media outlets from the GA-ASI media contact listed below.