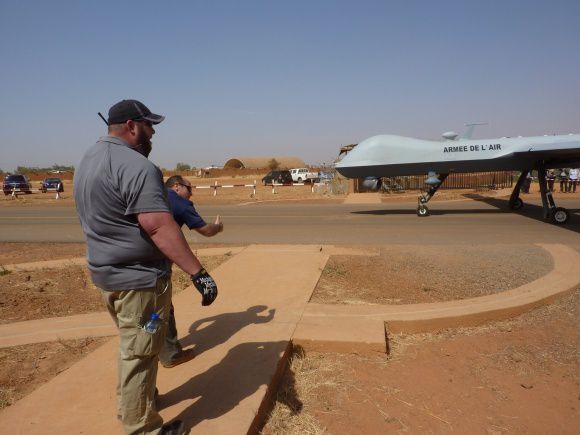 European guided weapons specialist MBDA is waiting on a decision from the US government on whether to acquire its Brimstone air-to-surface missile, with the company’s chief executive warning that a rejection of its offer will call into question the openness of Washington’s defence acquisition policy.

Speaking about the company’s inability so far to meet growth targets for its MBDA Inc unit in the USA, Antoine Bouvier says: “The most significant opportunity we could have short-term is the Brimstone, for some US customers.”

A UK-developed weapon capable of striking moving ground targets in all weather conditions from fixed-wing aircraft and unmanned air vehicles, the dual-mode seeker-equipped Brimstone early last year completed a bilateral firing campaign from a General Atomics Aeronautical Systems MQ-9 Reaper in the USA. A potential order for the missile has also been the subject of discussions between British Prime Minister David Cameron and US President Barack Obama, industry sources confirm. Additionally, GA-ASI announced that its Predator/Gray Eagle®-series aircraft family set a company record and historic industry feat in 2014: over 500,000 flight hours flown, which is the equivalent of flying 1,370 hours around-the-clock every day.

GA-ASI and SENER Team to Offer Predator B to Spain General Atomics Aeronautical Systems, Inc. (GA-ASI), a leading manufacturer of Remotely Piloted Aircraft (RPA) systems, radars, and electro-optic and related mission systems solutions, and SENER, a leading Spanish engineering company, today announced that they have signed a teaming agreement that promotes the use of the multi-mission Predator B® RPA to support Spain’s airborne surveillance and reconnaissance requirements.

“GA-ASI is proud to be teamed in Spain with SENER. They are a leading high-technology company with a long record of success in the defense and security sectors,” said Frank W. Pace, president, Aircraft Systems, GA-ASI. “GA-ASI is fully committed to working with Spanish industry as we believe this program’s success requires local industry partnerships that provide collaborative innovation in enhancing the capabilities of Predator B for the Spanish Government.”

Exelis to produce carriage and release systems for MQ-9 Reaper

Under the contract, Exelis will produce 619 BRU-71/A units for U.S. Government MQ-9s. The BRU-71/A is a pneumatic carriage and release system that uses compressed air rather than pyrotechnic cartridges to deploy payloads. The use of pneumatic technology reduces wear-and-tear and overall system maintenance and life-cycle costs.

“Unmanned and remotely piloted platforms are important to an increasingly wide range of missions,” said Pete Martin, vice president and general manager of the Exelis electronic attack and release systems business. “It is essential that the technologies they rely on, like our carriage and release systems, are designed to enhance their performance and endurance to support mission success into the future.”

Adaptable to a number of aircraft, the BRU-71/A delivers significant advanced benefits compared with previous-generation ejector racks. It is one-third the weight of existing racks in its class and offers ease of loading via independent, self-latching hooks. Additionally, it eliminates the use of pyrotechnic impulse cartridges and the resultant cleaning and maintenance actions and provides a high-reliability pneumatic in-flight lock.

This award is the third BRU-71/A follow-on production contract for Exelis. The first, for 208 units, was received in February 2011 and the second, for 520 units, was received in 2013. Deliveries of the latest batch will begin in October 2015 and will be completed in August 2016. Contract work is performed at the Exelis facility in Amityville, New York.

About Exelis
Exelis is a diversified, top-tier global aerospace, defense and information solutions company that leverages a 50-year legacy of deep customer knowledge and technical expertise to deliver affordable, mission-critical solutions for global customers. We are a leader in positioning and navigation, sensors, air traffic management solutions, image processing and distribution, communications and information systems, and focused on strategic growth in the areas of critical networks, ISR and analytics, electronic warfare and composite aerostructures. Headquartered in McLean, Va., Exelis employs approximately 10,000 people and generated 2013 sales of $4.8 billion. For more information, visit our website at www.exelisinc.com or connect with us on Facebook, Twitter, LinkedIn and YouTube. A single US Air Force General Atomics Aeronautical Systems MQ-9 Reaper unmanned air vehicle has surpassed a record 20,000 flight hours to date, following a 17h combat sortie in support of the US military's operations in Afghanistan. This marked the highest number of flight hours amassed by any Predator B/Reaper UAV, and happened on 23 December while flying in support of Operation Enduring Freedom. Work will be performed in Poway, California, with an expected completion date of Sept. 8, 2017. This contract was a sole-source acquisition. Fiscal year 2012 aircraft procurement funds in the amount of $40,906,190 are being obligated at the time of award.

The new aircraft flew a “flawless” 35min sortie on 27 June, an industry source says. It is understood that the company will proceed directly to full production, in anticipation of new international customer orders.

The system is derived from the MQ-1 Predator A system that is in service with the USA, Italy, Morocco and Turkey.

The second generation of the Predator, the MQ-9 Predator B/Reaper, is renowned for carrying out armed operations in theatres such as Afghanistan by a number of NATO operators of the UAV.

The XP is designed to be free from the restrictions covered by the International Traffic in Arms Regulations structure. This means that it will be exported in a "clean" unarmed configuration, broadening the potential customer base for the aircraft to countries in Latin America and the Middle East.

It was confirmed in February 2013 that the United Arab Emirates would be the first customer for the Predator XP, under a $197 million Foreign Military Sales deal conducted through the International Golden Group on behalf of the UAE armed forces.

The company declined to provide an update on the status of the UAE purchase at the time of the first flight. “We are in discussions with a number of countries, but are not at liberty to report any specific news on those pursuits at this time,” it adds. Kazakhstan has been reported as having shown interest in the platform.

Featuring modifications including winglets, the XP-variant UAV offers a flight endurance of up to 35h, and can reach a maximum altitude of 25,000ft, according to General Atomics.

UCLASS RFP expected by the end of March

Washington DC - Within the coming weeks the US Navy will release a request for proposal (RFP) for its unmanned carrier launched airborne surveillance and strike (UCLASS) programme, the service tells Flightglobal.

The documents attribute the delay to "adjustments to the programme's acquisition strategy."

Though the USN declines to provide a specific date for the RFP release, it says it typically releases RFPs within 15 days of posting a synopsis on the federal government's procurement website.

That synopsis went up on 13 March, meaning the RFP should be released by 28 March.

The 13 March posting announced that only four companies will be permitted to bid on the air vehicle segment of UCLASS.

“Award to any contractor other than a [preliminary design review] participant would result in significant schedule delays and require substantial additional costs which are not expected to be recouped by the government through full and open competition,” says the Navy.

The announcement follows the release of the US Navy’s fiscal year 2015 budget proposal, which still must be approved by Congress but would inject $403 million for UCLASS funding for fiscal year 2015.

That’s more than three times the $122 million allotted for the project in the current fiscal year.

The service plans to spend $2.67 billion through fiscal year 2019 on UCLASS development, according to budget documents.

Reports surfaced last year that the tight budget environment led the Navy to relax UCLASS requirements for stealth, inflight refueling and the ability to operate in contested airspace.

The Navy plans to invest $3.7 billion through 2020 on UCLASS and seeks to eventually field six to 24 of the stealthy UAVs, according to a 2013 Government Accountability Office report.

The report noted that the programme faces schedule risk because it is “heavily reliant on the successful development and delivery of other systems and software.”

It added that the Navy “will be challenged to effectively manage” and integrate the UCLASS air vehicle with carrier systems and control systems.

The report also notes that cost estimates are uncertain and could exceed available funding, and says problems could arise because the source selection process has been “compressed” to eight months from a typical 12 months. Fully armed MQ-9 takes off on a mission in Afghanistan. Photo US Air Force

The Predator B, called the MQ-9 Reaper in US military service, has been sold abroad to both the United Kingdom and Italy. The aircraft is in competition for service in Germany, and rumoured to have already won a contest in France despite lack of official confirmation.

"It is imperative that we ensure airworthiness certification of Predator B both at home and abroad as coalition forces withdraw from Afghanistan and nations transition mission focus to protection of the homeland and other civil uses," says General Atomics chairman Neal Blue.

UAVs are not currently allowed to fly in European airspace without significant restrictions. How European nations intend to integrate UAVs into civilian airspace remains unclear, but pressure is growing to include them for both military and civil uses. The modifications to be made are unclear, but partner RUAG will help define and implement them.

General Atomics did not respond to immediate questions.