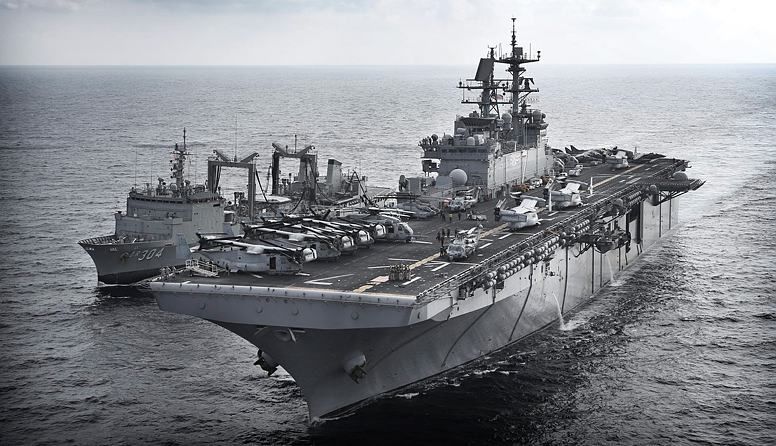 Deployed on Operation MANITOU, Success was in company with the Iwo Jima on transit through the Gulf of Aden.

“The Harrier Jets sliced the air leaving a stream line from their wing tips which produced great action photos. This was definitely the highlight of our deployment so far.”

Success recently conducted a Replenishment at Sea (RAS) evolution with Iwo Jima, transferring 685 cubic meters (CZ) of F76 marine diesel fuel, and 405 CZ of F44 aviation fuel to the carrier, the latter a record amount for the RAN’s Battle Tanker.

It was a stunning sight for Success’ crew, which is used to looking down on frigates or corvettes from the flag deck.

Success’ own embarked dependable S-70B-2 Seahawk spent much of the RAS evolution in the air, capturing images of this spectacular scene.

“I can see why these ships are so versatile,” he said.

“The flight decks on these types of carriers would be among the most dangerous workplaces in the world.

“There is so much happening, with such little margin for error.”

Success is in the Middle East on Operation MANITOU, the ADF’s contribution to maritime security, stability and prosperity in the area.

Success is due to return home to Fleet Base East in June.