The PILAR system uses the sound waves generated by the firing of small arms, Rocket Propelled Grenades (RPGs) and mortars to detect and accurately identify their location in real time. The PILAR screen displays the precise origin of the enemy fire in 3D.

IDEX: Explosion of UAVs at Exhibit 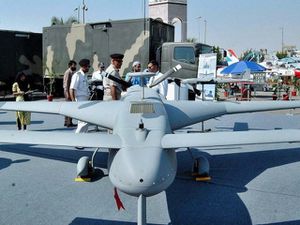 ABU DHABI — If anything has changed in the past few years at defense trade exhibitions, it’s the explosion in the number and variety of UAVs on display.

Big ones, medium ones, small, smaller and still smaller ones. Multi-winged or single-wing aircraft, pusher or tractor engines to power them, vertical systems with one, two or four rotors. Man-portable systems that fit in a rucksack. Craft with wheels or skids or hooks. A plethora of often interchangeable payloads of sensors and — increasingly — weapons the machines can put in the air. Also featured are a variety of control systems and units, ranging from trucks or trailers to laptops and wrist bands.

All the big boys in the business are here at the IDEX defense exposition and its NavDex naval component. Lockheed Martin, General Atomics and Boeing’s Insitu from the U.S.; Denel from South Africa; and a host of European entries, including vehicles from France, Austria, Switzerland, Sweden and Turkey are all vying for attention.

Among the UAV craft are an ever-growing number of offerings from countries not often associated with displaying home-grown military products. In South Asia, Pakistan has developed a range of UAVs, with several on display here.

“Most of these aircraft are in service now with the Pakistani military,” Tahir Hameed, a technical engineer with Xpert Engineering, said of four aircraft in an outdoor display area.

Xpert is one of seven companies that make up the Global Industrial and Defense Solutions (GIDS) group, that together makes nearly all the components in the aircraft and payload systems.

Standing by a large Shahpar tactical UAV, Shoaib Iqbal, an engineer with AERO, the Advanced Engineering Research Organization, proclaimed that “everything in this aircraft was made in Pakistan. Everything except the engines and tires.”

AERO builds sensors at its facility near Islamabad, in a region where most of the Pakistani UAV industry is located.

The Shahpar is the most sophisticated of the GIDS aircraft on display here. Configured with a pusher engine and canards and with a wingspan of 6.6 meters, the craft can carry a 50-kilogram payload to heights of 5,000 meters, and stay airborne more than seven hours.

Two flights of the Shahpar entered service in 2012, Iqbal said, one each with the Pakistani Army and Air Force, and GIDS is expanding its production facilities to answer the demand.

A flight, Iqbal explained, consists of five aircraft, a ground control station and a communications station.

Another tactical UAV, the Uqab, entered service in 2008 with the Pakistani Army, Hameed said, and has been in use with the Pakistani Navy since 2010. A wheeled vehicle that can reach an altitude of 3,000 meters and stay aloft for six hours, the Uqab is used for artillery fire correction and battle damage assessment in addition to surveillance duties.

The Huma, a smaller aircraft fitted with rocket boosters for takeoff and a parachute for landing, also is under development, along with the Scout mini-UAV, designed to be carried in a backpack and launched by hand.

Another growth area is in micro-UAVs, hand-held models not unlike something available at an electronics store or hobby shop.

Datron, a San Diego-based company best known for producing a range of radio and communications gear, is here with its Datron Scout aerial reconnaissance system, a four-rotor, vertical takeoff-and-landing vehicle meant to be used for short-range, short-endurance missions.

Even fitted with its battery pack and a sensor payload, the polycarbonate-construction vehicle barely weighs as much as a laptop computer — not even 3 pounds without the sensor. The Scout is intended to fly to a range of only about three kilometers and remain airborne for about 20 minutes, depending on the payload.

But the craft comes with a sophisticated flight control program, said Christopher Barter, program manager for the UAV.

So why did Datron, an electronics company, get into the UAV business?

“The value of a small unmanned aerial system you can pull out of a backpack is extremely lucrative,” he said. “And this model comes with autonomous control from a laptop, with global positioning satellite navigation.”

The Datron Scout, however, is remarkably similar to at least a half dozen other vehicles on display at this show and, at between $60,000 to $120,000 a copy, a bit pricier than most.