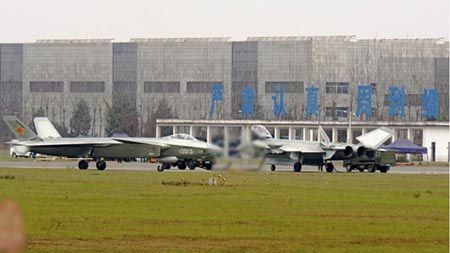 The prototypes, 2013, 2015, are said to be installed with new avionics developed by Aviation Industry Corporation of China's Chengdu Aircraft Industry Group. Its chief designer Pu Xiaobo said the system he created has an open framework that builds on an unified optical interconnect module. The system has comprehensive features covering navigation, detection, identification, attack, management and pilots' health management. It also integrates flight management systems, electronics and aviation electronics, which will ensure the fighter jet can carry out a mission safely and the systems are able to share their resources with each other.

Pu and his team built the country's most advanced concept laboratory and a simulation environment to test the design.

For over a year now China has been testing a second stealth fighter design. This one is called the J-31 “Falcon Eagle” (from an inscription on the tail), and while it looks like the American F-22, it’s also smaller than China’s other stealth fighter (the J-20, which has been around longer). The J-31 was built by the Shenyang Aircraft Corporation (which makes the J-11, the illegal Chinese copy of the Russian Su-27). The J-31 has some characteristics of the F-35 as well and appears to be something of an “F-35” to the earlier J-20s effort to match the American F-22. It’s also possible that the F-31 is a competing (with the J-20) design that is hustling to grab sales the J-20 thought it had all locked up. The J-31 flew for the first time last October and there are at least two prototypes and the designer has talked of the J-31 being able to operate off an aircraft carrier (like the U.S. F-35 and the J-15, a J-11 variant).  One advantage the J-31 has is two engines, compared to one for the F-35. This means the J-31 could carry more weapons, but this is less crucial with all the guided weapons available.

The J-31 is further evidence that China is determined to develop its own high tech military gear. While China is eager to develop advanced military technology locally, it recognizes that this takes time and more effort than nations new to this expect. Thus China is trying to avoid the mistakes Russia made in this area. That means having competing designs and developing necessary supporting industries is part of that. All this takes a lot of time and involves lots of little (and some major) failures. The Chinese are doing it right and are willing to wait until they get military tech that is truly world class.

The other stealth fighter, the J-20, was made by CAC (Chengdu Aircraft Company), which also produced the JF-17 and J-10. The J-20 made its first flight in 2011 and many more since then. There are at least two original J-20 prototypes and late last year a new prototype appeared that had several modifications and is estimated to have a max weight of 36 tons. While the J-20 looks like the American F-22 when viewed head on, it's overall shape, weight, and engine power is closer to the American F-15C. In other words, it's about 20 meters (62 feet) long, with a wing span of 13.3 meters (42 feet). J-20 has about the same wing area as the F-15C, which is about 25 percent less than the F-22 (which is a few percent larger than the F-15 in terms of length and wingspan). Worse, for the J-20, is the fact that its engine power is about the same as the F-15C, while the F-22 has 65 percent more power. With the afterburner turned on, the J-20 has more power than the F-15C and nearly as much as the F-22. But because the afterburner consumes so much fuel, you can't use more than a few minutes at a time. The new J-20 model appears to be able to supercruise, joining the F-22, Eurofighter and the Gripen as aircraft that can supercruise (go faster than the speed of sound without using the afterburner).

The J-20 has some stealthiness when it's coming at you head on. But from any other aspect, the J-20 will light up the radar screen. For this reason the J-20 is seen as a developmental aircraft, not the prototype of a new model headed for mass production. As such, it is only the fifth stealth fighter to fly, the others being the U.S. F-22 and F-35, plus the Russian T-50. The older U.S. F-117 was actually a light bomber and the B-2 was obviously a heavy bomber. Based on recent Chinese warplane development projects (J-11 in particular), the J-20 has a long development road ahead of it and will likely change size and shape before it reaches the production design. The J-31 may be an insurance policy, in case the J-20 effort goes off the rails in a big way.

While the shape of the J-20 confers a degree of stealthiness (invisibility to radar), even more electronic invisibility comes from special materials covering the aircraft. It's not known how far along the Chinese are in creating, or stealing, these materials, or the needed engines. China would most likely use the J-20 singly, or in small groups, to seek out and attack American carriers. To make this possible F-22 class engines are needed and that is still in development. Over the last few years China has admitted it has been developing the WS-15 engine (since the 1990s), a more powerful beast well suited for the J-20. No date was given as to when the WS-15 would be available for use or whether it would have the same vectoring (ability to move the hot jet exhaust in different directions in order to make the fighter more maneuverable) the F-22 uses.

For the J-20 to be a superior fighter, it would need electronics (including radars and defense systems) on a par with the F-35 and F-22. So far, the Chinese have not caught up with stuff used by current American fighters. But the gap is being closed, faster than it was during the Cold War when the Russians were creating, or stealing, their way to military tech equivalence with the West. The Russians never made it but the Chinese believe they can succeed.

Work on the J-20 began in the late 1990s, and the Chinese knew that it could be 25 years or more before they had a competitive stealth fighter-bomber. The J-20 is being tested in central China. The twin engine J-20 appears to be about the same weight class as the 30 ton F-15C. The F-35A is a 31 ton, single engine fighter, while the twin-engine F-22 is slightly larger at 38 tons. The Russian T-50 weighed in at 37 tons.

China is also developing other support technologies, like the AESA radar, highly efficient cockpit, stealth, and software to tie everything together. Developing, or even copying, this tech is not easy. But the Chinese already know that, having decades of experience adapting stolen technology to their needs. Thus it appears that China is planning on having the J-20, in some form, ready for service by the end of the decade. The key factor is their ability to develop or steal the needed technology by then. The J-20 appears to be a fighter-bomber, as this kind of aircraft would be most useful dealing with the U.S. Navy and key targets in Taiwan or Japan. In any event, the J-20 is an attempt to develop some kind of 5th generation aircraft, complete with stealth.

The only other competitor in this area is Russia, where fifth generation fighter developments were halted when the Soviet Union disintegrated in 1991. Actually, all development work on new fighters, by everyone, slowed down in the 1990s. But work on the F-22, F-35, Eurofighter, and Rafale continued, and those aircraft became, in roughly that order, the most advanced fighter aircraft available today. MiG resumed work on the I.42 in the 1990s, but had to stop after a few years because of a lack of money. Sukhoi has never stopped working on its T-50, funded by much higher sales of its Su-27/30 fighters. This fifth generation may come to be called the "last generation," after they are replaced by the second generation of pilotless combat aircraft (counting armed Predators and the like as the first).