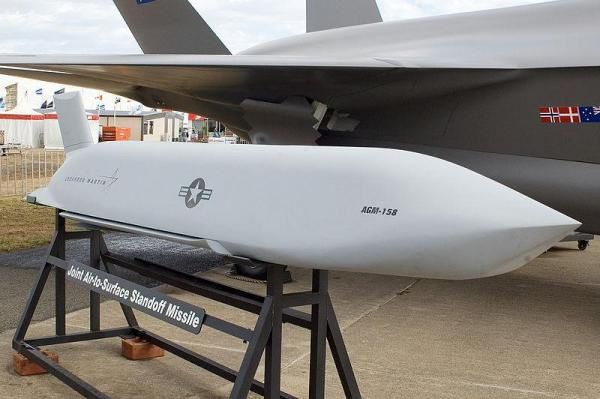 The JASSM missile on display at an airshow in Australia. photo Lockheed Martin

Lockheed Martin is to supply air-launched cruise missiles for the Polish Air Force.

The Polish Air Force is receiving Joint Air-to-Surface Standoff Missiles from Lockheed Martin for its fleet of F-16 fighters.

The contract for the air-to-ground cruise missiles comes as a result of a U.S. Foreign Military Sales deal for Poland announced last year.

That package, worth about $500 million, was for 40 AGM-158 JASSM missiles and upgrades to the aircraft.

JASSM is a stealthy, precision-guided cruise missile that employes an infrared seeker and an enhanced digital anti-jam Global Positioning System. It is integrated on the U.S. Air Force's B-1, B-2, B-52, F-16 and F-15E. Internationally, it can also be used by F/A-18A/B and the F-18C/D aircraft.

Poland, with the order, will be only the third U.S. ally with the JASSM in their military inventory. The other two countries are Australia and Finland.

Lockheed Martin gave no information as to a delivery schedule for the missiles. Poland's defence ministry has signed a $250 million contract to purchase Lockheed Martin AGM-158A JASSM weapons for the nation's air force. Completed at Krzesiny air base on 11 December, the deal will equip the service's Lockheed F-16C/D aircraft.

The Lot 11 and Lot 12 contracts include production of 340 baseline missiles and 100 ER missiles. The contracts also include systems engineering, logistics support, tooling and test equipment. This is the first time the JASSM program has been awarded consecutive production lots at the same time.

“These contracts bring the total number of JASSM cruise missiles on contract to over 2,100, and underscore the U.S. Air Force’s and Lockheed Martin’s commitment to the program,” said Jason Denney, program director of Long Range Strike Systems at Lockheed Martin Missiles and Fire Control. “JASSM’s high reliability and capability allow it to defeat high-value, well-defended current and future threats.”

Armed with a dual-mode penetrator and blast-fragmentation warhead, JASSM and JASSM-ER cruise autonomously day or night in all weather conditions. Both missiles share the same powerful capabilities and stealthy characteristics, though JASSM-ER has more than two-and-a-half times the range of the baseline JASSM for greater standoff margin. These 2,000-pound cruise missiles employ an infrared seeker and Global Positioning System receiver to dial into specific target aimpoints.

JASSM and JASSM-ER are critical weapons for the U.S. Air Force. Highly effective against high-value, well-fortified, fixed and relocatable targets, the stealthy JASSM is integrated on the U.S. Air Force’s B-1B, B-2, B-52, F-16 and F-15E. The B-1B also carries JASSM-ER.

Internationally, JASSM is integrated on the Royal Australian Air Force’s F/A-18A/B. Future integration efforts will focus on the U.S. and international versions of the Lockheed Martin F-35 Lightning II fighter aircraft and other international platforms.

JASSM is produced at the company’s award-winning manufacturing facility in Troy, Ala., honored as one of the “Top 10 Best Plants in America” by Industry Week magazine for 2012. The facility has assembled more than 1,400 JASSM cruise missiles for testing and operational use toward a total U.S. Air Force objective of 4,900.

Headquartered in Bethesda, Md., Lockheed Martin is a global security and aerospace company that employs about 116,000 people worldwide and is principally engaged in the research, design, development, manufacture, integration, and sustainment of advanced technology systems, products, and services. The Corporation’s net sales for 2012 were $47.2 billion.

Finland is the second international customer for JASSM. This second contract for Finland includes test missiles, software development and engineering documentation. The first contract was awarded in 2012, which initiated the six-year integration, production and sustainment effort.

“JASSM’s capabilities and proven reliability will play an essential role in assisting the Republic of Finland to achieve their national defense objectives,” said Bob Adams, international program manager of long-range strike systems at Lockheed Martin Missiles and Fire Control. “We are on schedule to support the operational requirements of the Finnish Air Force’s F-18 mid-life upgrade effort.”

The contract award follows several recent JASSM program milestones, including successful completion of the Lot 6 Reliability Assessment Program and completion of the JASSM-ER initial operational test and evaluation program, which resulted in recommendation for full-rate production.

JASSM is an autonomous, air-to-ground, precision-guided standoff missile designed to meet the needs of U.S. and allied warfighters. Armed with a penetrator and blast fragmentation warhead, JASSM cruises autonomously, day or night in all weather conditions. The missile employs an infrared seeker and enhanced digital anti-jam Global Positioning System to find specific points on targets.

The stealthy JASSM is integrated on the U.S. Air Force’s B-1, B-2, B-52, F-16 and F-15E. Internationally, JASSM is certified on the F/A-18A/B for the Royal Australian Air Force. Future integration efforts will focus on U.S. and international versions of the Lockheed Martin F-35 Lightning II fighter aircraft and other international platforms.