The US has announced it is sending military aircraft and more special forces to look for Ugandan rebel leader Joseph Kony.

At least four CV-22 Ospreys and refuelling planes, as well as 150 Air Force special forces personnel will arrive in Uganda this week, they say.

Mr Kony is wanted by the International Criminal Court on war crimes charges.

The US first deployed some 100 special forces in 2011 to help thousands of African troops track him down.

His Lord's Resistance Army (LRA) rebels are notorious for abducting children and forcing the boys to become fighters and keeping the girls as sex slaves.

Boys are forced to kill their own parents, so they think they cannot return home.

The group first emerged in Uganda in the 1980s but its fighters now roam between Central African Republic, South Sudan and the Democratic Republic of Congo.

National Security Council spokesperson Caitlin Hayden said the lack of aircraft had been identified by the African countries leading the hunt for Mr Kony as one of their major obstacles to finding him and the other LRA leaders "across a wide swath of one of the world's poorest, least governed and most remote regions".

The US forces would be based in Uganda but would be used in other countries where the LRA was present, she said.

The African Union-led forces would remain in charge of the operation, with the US retaining an advisory role.

CV-22 Ospreys can land and take off vertically like a helicopter but fly like a plane so they can travel further and faster than helicopters.

Il s'agit d'hélicoptères capable de transporter douze combattants équipés ("weighing 250 pounds each to include their personnel protective gear to include their weapons with basic ammo load") et du fret dans la carlingue ou sous hélingue (l'appel d'offres précise que "Each aircraft must be able to carry 3000 pounds of internal cargo. The internal cargo may be any combination of personnel and cargo not to exceed 3000 pounds for each aircraft. 1.2.5.1. The Contractor shall have the ability to conduct re-supply while at a hover, - i.e. pushing out a small pallet or large bag (24”x36”x42”; about 500lbs) consisting of supplies and equipment. Contractor shall have the ability to conduct sling load re-supply"). 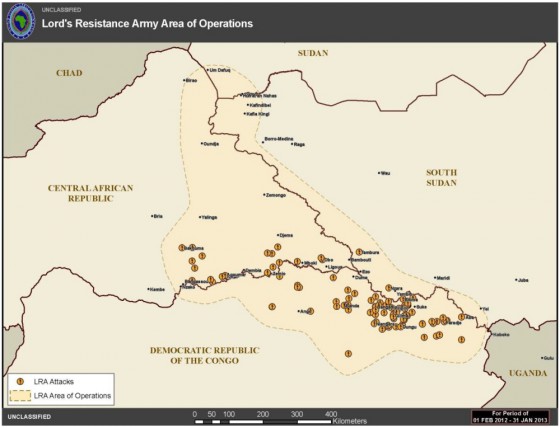