Nano-drones are powered by light 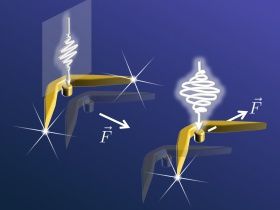 Compact multicopter drones are increasingly popular as toys. Even commercial companies like internet retailer Amazon are considering to deliver their consignments through automated drones. The common denominator of these flying objects is their ability to execute even complex manoeuvres with extreme precision. Computer-based control algorithms play a decisive role in this equation.

A team of scientists of the Julius Maximilian University of Würzburg (Germany) now plans to transfer these principles and features to the nanometre scale. Their intention is developing tiny nano drones that can be controlled via laser. The cloud: the polarised laser rays will not only carry control information but likewise the power for operation.
If successful, the scientists would have created an entirely new class of nano tools that can be steered with extreme precision through liquids – to the benefit of nantotechnologies and life sciences. For instance, these drones could assume tasks like performing 3D scans on nano particles, or arranging such particles in a given order. Another imaginable application would be manipulating objects within cells.
Read more