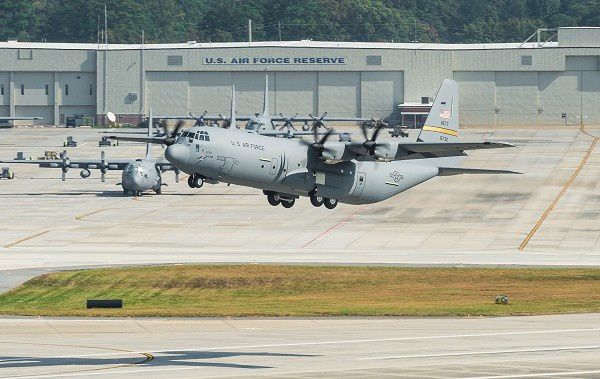 The State Department has made a determination approving a possible Foreign Military Sale to France for C-130J aircraft and associated equipment, parts and logistical support for an estimated cost of $650 million. The Defense Security Cooperation Agency delivered the required certification notifying Congress of this possible sale today.

The Government of France has requested a possible sale of:

The C-130Js will provide critical transport, airdrop, and resupply to thousands of French troops in support of current and future operations. The KC-130Js will provide crucial air refueling capability to France's fighter aircraft, light transport aircraft, and helicopters. France will have no difficulty absorbing these aircraft into its armed forces.

France requests that Lockheed Martin be the sole source provider for the C-130J aircraft. There are no known offset agreements proposed in connection with this potential sale.

Implementation of this proposed sale may require multiple trips for U.S. contractor representatives to France and potentially to deployed locations to provide initial launch, recovery, and maintenance support. The U.S. Marine Corps has decided to buy only six Harvest Hawk kits instead of nine. Each of these kits can be used to quickly turn one of ten modified KC-130J transports into a gunship. Meanwhile the marines are also upgrading all their Harvest Hawk kits with new or improved software and electronics (mainly for sensors and communications). Such upgrades have been coming regularly since the first Harvest Hawk kit arrived in Afghanistan in 2010. The marines are also upgrading the KC-130Js already modified to use Harvest Hawk. For example in 2012 the first KC-130J got a modified rear door (the Derringer Door) that enables missiles to be fired, and the missile launcher reloaded, without first depressurizing the aircraft and lowering the rear ramp. This solved a major problem because initially you had to lower the rear door to fire missiles and reload the launchers. Since the aircraft usually operated at high altitude (6,400 meters/20,000 feet) the crew had to put on oxygen masks and it took time to depressurize the cargo bay and lower the rear ramp. The new door has ten launch tubes that can be used (for firing or reloading) while the ramp is closed.

The KC-130J is the latest, and largest, marine version of the C-130 transport used for aerial refueling. But the KC-130J can also carry cargo and weapons (bombs and missiles) hung from the wings or fired from inside. This last capability is for the Harvest Hawk version of the KC-130J. This "instant gunship" system enables weapons and sensors to be quickly rolled into a C-130 transport and hooked up. This takes a few hours and turns the C-130 into a gunship (similar in capabilities existing AC-130 gunships). The sensor package consists of day/night vidcams with magnification capability. The weapons currently consist of ten Griffin missile launchers plus four Hellfires and at least four Viper Strike hanging from the wings.

Viper Strike is a 914mm (36 inch) long unpowered glider. The 130mm diameter (with the wings folded) weapon weighs 20 kg (44 pounds). Because the Viper Strike comes straight down, it is better suited for urban warfare. Its warhead weighs only 1.8 kg (four pounds), and less than half of that is explosives. This means less damage to nearby civilians, but still powerful and accurate enough to destroy its target. A laser designator makes the Viper Strike accurate enough to hit an automobile, or a foxhole.

Griffin is a 20.5 kg (45 pounds) glide bomb that has a 5.9 kg (13 pound) warhead. Griffin has a greater range (15 kilometers) than Hellfire because of pop-out wings that allow it to glide after launch. Griffin uses laser, GPS, and inertial guidance. The Hellfire II missile has been around a lot longer, weighs 48.2 kg (106 pounds), carries a 9 kg (20 pound) warhead, and has a range of 8,000 meters.

The big thing with gunships is their sensors, not their weapons. Operating at night the gunships can see what is going on below in great detail. Using onboard weapons gunships can immediately engage targets. But with the appearance of smart bombs (GPS and laser guided), aerial weapons are more available to hit any target that is found. So Harvest Hawk would be able to hit targets that were "time sensitive" (had to be hit before they got away) but could also call on smart bombs or laser guided missiles for targets that weren't going anywhere right away. Most of what Harvest Hawk did in Afghanistan was look for roadside bombs or the guys who plant them. The marines wanted to track the bomb planters back to their base and then take out an entire roadside bomb operation. This worked quite well and Harvest Hawk may be returning to Iraq to use what it learned in Afghanistan.

Lockheed Martin has delivered its first of three KC-130J tanker/transports to the Kuwait air force, providing the service with a new air-to-air refuelling capability.

Carrying the registration KAF 326, the short-fuselage aircraft will be followed by another two contained within a production order signed in 2010. These are to be handed over before the end of this year, according to Flightglobal’s Ascend Fleets database.

Kuwait also has options on a further five Rolls-Royce AE2100D3-powered KC-130Js. It will use the type for tasks including supporting operations with its Boeing F/A-18C combat aircraft.

The aircraft will be welcomed with a formal ceremony on March 18, in Texas, where it is the first KC-130J tanker to be stationed in the state. NAS Fort Worth JRB shares a runway with Lockheed Martin’s Aeronautics headquarters location in Fort Worth.

“Since the early 1960s, U.S. Marine Corps teams have operated the KC-130 and showcased the Hercules’ unparalleled capabilities as both a flexible tactical airlifter and vital tanker resource. This new KC-130J provides VMGR-234 crews with added power, strength and flexibility to support the highly critical missions they are depended upon to perform,” said George Shultz, vice president and general manager, C-130 Programs. “The arrival of the KC-130J Super Hercules in Fort Worth represents the start of a new era of Hercules history and we are honored to extend this tradition of Hercules flight with the U.S. Marine Corps Reserve.”

VMGR-234 is a part of Marine Aircraft Group 41 (MAG-41), 4th Marine Aircraft Wing (4th MAW). Its crew and aircraft provide aerial refueling capabilities and air transport of personnel, equipment and supplies. The squadron, known as the “Rangers,” has operated KC-130s for more than 30 years, using the aircraft for missions during the Gulf War and Operation Enduring Freedom in addition to providing humanitarian support around the world. The squadron previously operated KC-130Fs and most recently, KC-130Ts.

The KC-130J is the global leader in aerial refueling for both tactical aircraft and helicopters, and it is also capable of conducting rapid ground refueling. The battle-tested KC-130J aerial refueling tanker is the latest in a long lineage of C-130 Hercules tanker technology. The new KC-130J builds on proven tanker designs while taking full advantage of tremendous technological and performance improvements inherent in the basic C-130J aircraft. KC-130Js operated by U.S. Marine Corps active duty crews contributed to the worldwide C-130 fleet’s initial 1 million flight hours.