A RAAF KC-30A Multi-Role Tanker Transport (MRTT) has returned from the United States following the first round of air-to-air refuelling trials with F-16 multi-role fighters. A Royal Australian Air Force KC-30A Multi-Role Tanker Transport aircraft has used its air‑to‑air refueling boom for the first time on operations while refueling a RAAF E-7A Wedgetail last week during a Coalition mission above Iraq. The air-to-air boom refuelling process involved two large aircraft, military versions of the Airbus A330 and Boeing 737-700, approaching within metres of each other while in flight and transferring fuel via a maneuverable pipe, known as a boom, which extends back from the rear of the KC-30A. This type of refuelling involves use of the AAR boom at the rear of the aircraft, rather than the wingtip AAR drogues used to refuel smaller aircraft equipped with an AAR probe. Commander of the Australian Air Task Group, Air Commodore Stuart Bellingham, said establishing and proving the operational boom refueling capability was yet another in a long list of accomplishments by the Australian Defence Force team in the Middle East. 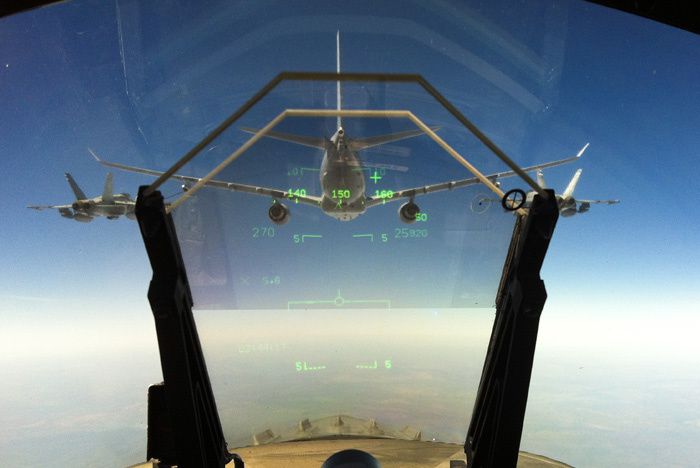 The Royal Australian Air Force’s KC-30A Multi Role Tanker Transport (MRTT) aircraft has been removed from the Projects of Concern list after effectively being remediated by the Defence Materiel Organisation (DMO) and its industry partner.

Known as Project AIR 5402, the KC-30A MRTT had been on the Project of Concern list since February 2010 due to delays in delivery by Airbus Defence and Space.

DMO Acting Chief Executive Officer, Harry Dunstall, said that following an extensive development and testing program, the issues previously identified with the introduction of the Aerial Refuelling Boom System had been resolved and Defence had formally accepted the capability.

“Resolution of this issue completes the remediation of all activities identified in the project’s remediation plan, and accordingly it has been removed from the list,” Mr Dunstall said.

“Airbus Defence and Space has worked collaboratively with us to address our concerns and I would like to recognise and thank Airbus for their efforts.

“This is a great example of the effectiveness of the Projects of Concern process in remediating troubled projects.”

These aircraft are capable of in-flight refuelling of current and future ADF aircraft and will provide a significant air logistics services capability.

The KC-30A aircraft has been conducting hose and drogue in-flight refuelling in the RAAF since 2011 and is being used to great effect on current operations in the Middle East.

The recent acceptance of the boom capability paves the way to begin introduction of the boom in-flight refuelling capability into service progressively through 2015.

This capability will now undergo operational evaluation and all aircrew will be trained before Air Force can declare Full Operational Capability. The crew of a RAAF KC-30A have been praised by senior Super Hornet crews in Australia’s Air Task Group for their performance during a recent mission over Iraq.

Commander of Australia’s Air Task Group, Air Commodore Steve Roberton, said the decisive action from the air-to-air refueller during a mission over Iraq mid November was pivotal in a successful attack against ISIL militants.

“In a recent mission over the North of Iraq, the actions of the KC-30A crew reduced the refuelling time for Australia’s Super Hornets by 15 minutes. This enabled them to rapidly return to the fight during a crucial period of battle,” AIRCDRE Roberton said.

“Their situational awareness and initiative allowed our own Super Hornets to deliver weapons with a decisive effect in support of Iraqi Forces.”

The KC-30A is equipped with advanced communication technology which allows crews to monitor the progress of the air and ground battle.

They exploit this increased situational awareness to dynamically re-position the aircraft as close as possible to Australia’s Super Hornets and other Coalition strike aircraft.

Taking this initiative reduces the refuelling time between attacks on ISIL.

“Their actions are often unheralded but the KC-30A crews made the difference that day.”

As for the KC-30A crew, they attribute their responsiveness to the aircraft’s advanced systems and its reliability.

One of the pilots, SQNLDR C (name withheld), remarked on how the aircraft was withstanding the hot and dusty conditions in the Middle East.

“The tanker is thriving over here, the more you fly it, the better it performs,” he said.