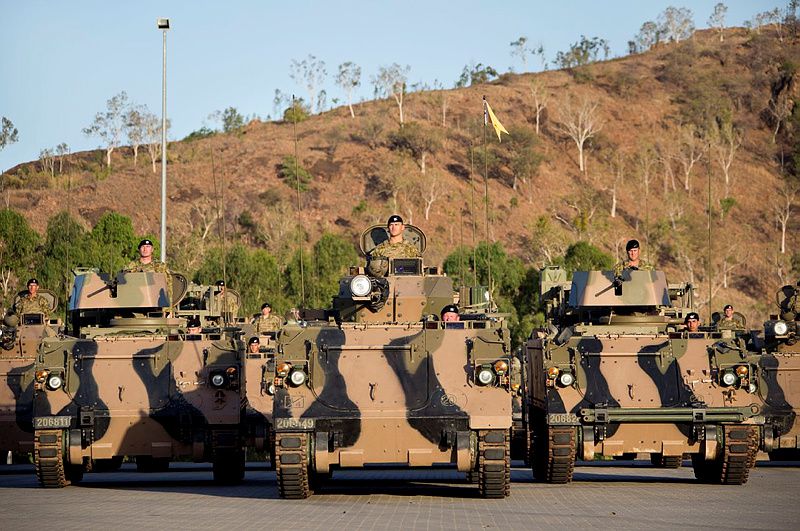 There’s been a lengthy and lively debate on The Strategist lately regarding the future of Australia’s surface combatants, specifically the SEA 5000 future frigate. Attracting little attention on the other hand was last months’ closure of the RFT deadline for LAND 400 Phase 2—the LAND 400 phase that will provide the Army with its future Combat Reconnaissance Vehicle (CRV) capability. Given that this programme will completely redefine and reshape the Army’s ground combat capabilities, it needs greater attention.

The nature of the LAND 400 project is well known; about six months back The Strategist played host to a debate on this particular topic. But now that the Phase 2 process is well underway, it’s time to re-examine the possibilities for Phase 3. Army’s legacy fleet of M113 APCs, by the time of their complete replacement in 2030, will be almost 70 years old. The M113, which Tom Clancy once called an ‘old aluminium box’, isn’t survivable on a modern battlefield. Army’s ASLAVs wouldn’t fare much better—although acquired from the mid-1990s onwards, their original design (based on the Swiss MOWAG Piranha) dates from the 1970s.

With the closing of the RFT for Phase 2, a replacement is in sight. Unfortunately for the Army, there will be a significant wait until its obsolete M113s can be replaced. LAND 400 Phase 3, which will replace the M113s with an infantry fighting vehicle (IFV), will only be confirmed in the 2015 Defence White Paper, due to be released sometime later this year.

In the meantime, some serious thought within and outside Defence, as to what shape the Phase 3 vehicle can and should take, needs to take place. Given a tightening fiscal situation and the escalating cost of modern military hardware, Army is most likely to acquire an existing Military Off The Shelf (MOTS) platform to fulfil the requirements of LAND 400 Phase 3.

The Australian Army’s most recent combat experience has been in low-intensity warfare environments, but the service needs to be adaptable and agile enough to defeat opponents with both symmetrical and asymmetrical capabilities (such as Daesh/ISIS/ISIL/IS). The future IFV must be readily deployable and mustn’t tax existing logistical capabilities and infrastructure. And, acknowledging the likelihood of future ground combat occurring in urbanised areas and against opponents armed with modern, man portable anti-tank missiles and increasingly sophisticated area-denial weapons, the future IFV must provide the Australian infantryman with a combination of armour, firepower and mobility.

The contender which emerges victorious from Phase 2 could have a strong influence on the capability demanded by Phase 3. Most Phase 2 contenders—General Dynamics’ Stryker and Piranha, BAE’s RG-41 and Patria, Rheinmetall’s Boxer and ST/Elbit System’s TERREX2 (Nexter chose to withdraw its combat proven VBCI)—are 8×8 armoured fighting vehicles in the 20-30 tonne range with an autocannon or remotely operated machinegun as main armament and a carrying capacity of 8-10 fully equipped infantrymen. All could readily fulfil, or be adapted to fulfil, the Phase 3 requirement. But are these the only possibilities?

Beyond the wheeled platforms, BAE’s CV-90 is a strong tracked option. It’s a relatively newer platform, unlike the 30 year old Bradley, it’s well armed and protected, and can carry eight mounted infantry. What’s more, it’s been combat proven in Afghanistan with the Swedish, Danish and Norwegian armies. Krauss-Maffei Wegmann and Rheinmetall’s joint venture, the Puma, is heavier (topping out at 47 tonnes with bolt-on armour) and remains untested in combat, but is a much newer system and its modular design allows for future-proofing; German staff officers have even hypothesised that fitting the Puma with a larger calibre gun could convert the IFV into medium tanks. The Puma’s cost (estimated by a US think tank to be around US$7 million per vehicle) and its lower carrying capacity (six infantry) however would mitigate against it.

Thinking outside the box, what about the Israeli designed Namer (Leopard) armoured personnel carrier? Sure, it’s heavy—60 tonnes heavy to be precise—but its armour protection is comparable to that of an MBT, it has the off-road mobility to keep pace with MBTs on the move, it can carry a full rifle section under armour and an IFV variant s reportedly in development.

The downside is that its weight means that it can’t be airlifted in significant numbers (or by a C-130) and its use will be restricted in regions where the infrastructure can’t support it. But, as Bruce Cameron pointed out, ‘AFV survivability is the factor which will win battles and save lives’. And the Namer has proven to be very survivable—the Israel Defense Forces (IDF) consider it to be the best protected armoured fighting vehicle available, especially when equipped with an active protection system like Trophy. However, aside from a report that Israel offered the Namer to Columbia, there’s no confirmed evidence that it’s currently available for export. It is worth considering however.

The eagerly awaited 2015 Defence White Paper will shed additional light on LAND 400 Phase 3. Until then the possibilities for Australia’s future infantry fighting vehicle need to be strenuously examined and discussed.

Mitchell Yates is a post-graduate research student at the University of Western Sydney.
Partager cet article 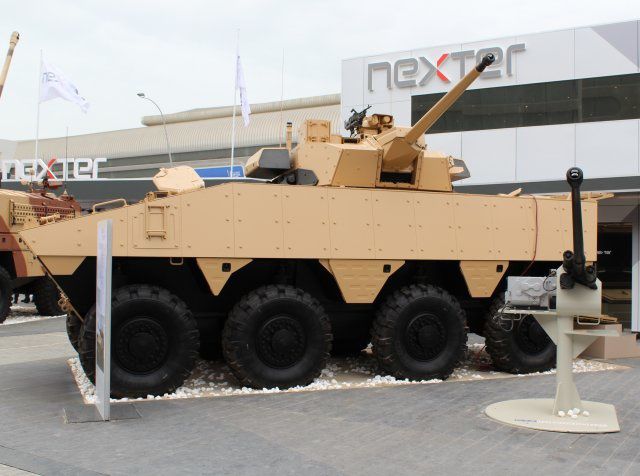 General Dynamics Land Systems and Thales Australia have signed a teaming memorandum of understanding (MOU) with the intention to submit a bid in response to the Land 400 Phase 2 - Mounted Combat Reconnaissance Capability Request For Tender.

General Dynamics and Thales have a proven track record of working together across a broad range of vehicle programs.  These include Canada's LAV III Upgrade, the UK Foxhound and Scout SV Programs, Switzerland's Piranha CBRN Program, and in Australia the ASLAV Program for Crew Procedural Trainer and electro-optics. The Minister for Defence, the Hon. Kevin Andrews MP, today announced the Australian Government has given First Pass approval for project LAND 400 Phase 2 – Mounted Combat Reconnaissance Capability. The Request for Tender has been released for the multi-billion dollar project to replace the Australian Defence Force’s Australian Light Armoured Vehicle (ASLAV).

Mr Andrews, together with the Minister for Industry and Science, The Hon. Ian Macfarlane MP, urged Australian industry to take advantage of opportunities arising from project Land 400 Phase 2.

Speaking at the Puckapunyal Army Base, Mr Andrews said Australian industry would have the opportunity to participate in both the acquisition and support phases.

“The ASLAV is the ADF’s current mounted combat reconnaissance vehicle and has seen extensive operational service, including in East Timor, Iraq and Afghanistan,” Mr Andrews said.

“The fleet will reach the end of its life around 2021. The Government is committed to replacing and enhancing the Army’s fleet of combat vehicles and other land force capabilities to best protect our soldiers.”

Mr Macfarlane said the prime contractors leading bids to provide the new vehicles would be expected to maximise Australian industry content while ensuring an effective capability, without detriment to the quality, interoperability, schedule or cost of the project.

“When it comes to Defence contracts, Australian suppliers want a piece of the pie,” Mr Macfarlane said.

“The Government’s broader policy settings, including our Industry Innovation and Competitiveness Agenda and Advanced Manufacturing Growth Centre, are focussed on building on our strengths and maximising opportunities for investment and job creation.

“Australian industry must continue to demonstrate that it can be competitive, and can be a vital, long-term contributor to supply chains and support strategies.”

The upcoming Defence White Paper will confirm the remaining scope of the program, which is likely to provide an infantry fighting vehicle, currently partly provided by the M113 Armoured Personnel Carrier, a manoeuvre support vehicle, and an integrated training system.

When fully delivered, the LAND 400 Program will allow Army to successfully sustain mounted close combat against emerging and future threats as part of a joint force.

Australian companies wishing to be involved as sub-contractors to have the opportunity to pursue a range of opportunities including:

This process is consistent with the successes achieved by Australian companies in winning work in other major Defence procurement programs including the international Joint Strike Fighter program.

Defence continues to provide assistance to industry through a number of other related and successful programs including the Global Supply Chain program and Team Defence Australia.

Australian suppliers are being encouraged to register at: http://www.defence.gov.au/dmo/AboutDMO/OurStructure/GMLandandMaritime/LandSystems/Content/land400industryopp.aspx 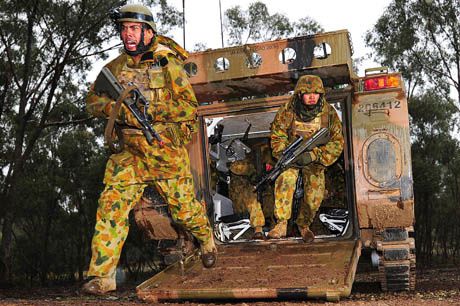