Thales and ASELSAN sign a further Cooperation Agreement during IDEX 2015 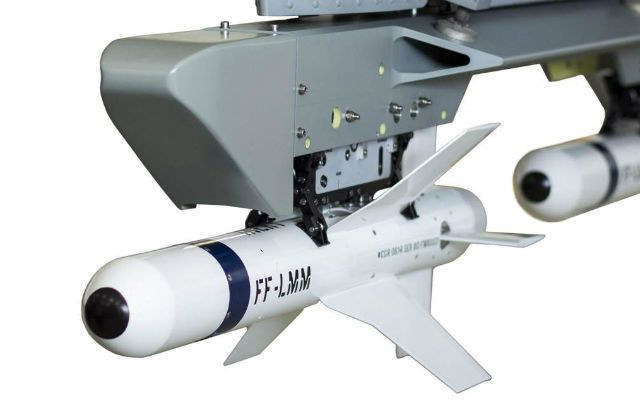 The cooperation between the two companies was initiated in 2010 and first stage firings of an integrated Missile Launcher System and LMM were demonstrated in 2014. The agreement covers further firing demonstrations, initially in the naval domain and allows for further cooperation in other areas where both Thales and ASELSAN are well experienced.

Thales’s LMM is a lightweight precision strike-missile that has been designed to be fired from a variety of tactical platforms including helicopters, fixed or rotary winged UAVs, wheeled or tracked vehicles or naval platforms. The target set includes surface threats such as static installations, armoured personnel carriers, asymmetric threats, fast in-shore attack crafts and UAVs.

ASELSAN’s Missile Launcher System is a customized compact and lightweight solution for naval platforms such as fast patrol boats and larger ships, providing defence for critical infrastructure such as oil rigs, seaports and naval bases against a variety of surface and air threats. The LMM Launcher System can be used either autonomously or fully integrated within a combat management system.

4/8 ready to fire LMM designed and produced by Thales

High level system automation for ease of use

Thales is a global technology leader in the Aerospace, Transportation and Defence & Security markets. In 2013, the company generated revenues of €14.2 billion with 65,000 employees in 56 countries. With its 25,000 engineers and researchers, Thales has a unique capability to design, develop and deploy equipment, systems and services that meet the most complex security requirements. Thales has an exceptional international footprint, with operations around the world working with customers and local partners.

British Defense firm Thales has developed an unpowered version of its LMM (Lightweight Multi-role Missile). The original LMM is a 76mm (diameter), 13 kg (28.6 pounds) missile with a range of eight kilometers that uses laser (beam riding) guidance. It can be fired from the air or the ground.

The new version is called FFLMM and is LMM without the rocket motor. That means FFLMM weighs only six kg (13 pounds) and is 700mm (27.5 inches) long. FFLMM has larger fins for guidance and lift so that from a high altitude FFLMM has a range of at least two kilometers. FFLMM also has GPS and INS (inertial) guidance in addition to laser. This FFLMM can be used as a lightweight smart bomb. A U.S. defense firm is marketing FFLMM as “Fury.”

Small missiles like LMM have become more common in the last five years. This is due to technical advances. For example over the last two decades several firms have figured out how to turn 70mm (2.75 inch) unguided rockets into laser guided missiles. All these 70mm guided rockets are basically 13.6 kg (30 pound) 70mm rockets with a laser seeker, a 2.7 kg (six pound) warhead, and a range of about six kilometers when fired from the air. Laser designators on a helicopter, or with troops on the ground, are pointed at the target and the laser seeker in the front of the DAGR homes in on the reflected laser light.

These 70mm designs are finally starting to get orders and there is plenty of competition. Back in 2010 the U.S. began using the 15.6 kg (34.5 pound) Griffin in Afghanistan, fired from UAVs and gunships. The Griffin came about because the existing small missile (Hellfire) was often too big. The Hellfire II weighs 48.2 kg (106 pounds), carries a 9 kg (20 pound) warhead, and has a range of 8,000 meters. The Griffin has a 5.9 kg (13 pound) warhead which is larger, in proportion to its size, than the one carried by Hellfire. Griffin has pop-out wings, allowing it to glide and thus has a longer range (15 kilometers) than Hellfire. UAVs can carry more of the smaller missiles, typically two of them in place of one Hellfire. There are similar arrangements for LMM. The LMM is believed to have the same design approach as the Griffin, including a fairly large warhead (over 5 kg).

The British Royal Navy has become the first customer for the LMM, ordering a thousand of them in 2011 for its new Lynx Wildcat helicopter. The LMM will enter service by the end of the decade and the FFLMM shortly thereafter. The light weight of the FFLMM makes it useful for many smaller UAVs.

In 2013 Turkish firm joined with Thales to develop and market a ship mounted remote control launcher for LMM. The Aselsan Missile Launching System (MLS) has eight LMMs in sealed containers, plus some sensors. The launcher can be mounted on small warships, shore installations, or oil rigs.

Thales has introduced a freefall variant of its precision-guided Lightweight Multirole Missile (LMM) suited for integration on a wide range of unmanned air vehicles (UAVs).

The company partnered with Textron Systems around 18 months ago to perform integration of the 6kg munition on-board an undisclosed UAV, which the partnership is now ready to bring to market.

A 70cm- (27.5in) long, 7.6cm-wide munition with a 2kg (4.4lb) warhead that provides a precision strike – including against armoured vehicles – it utilises an inertial navigation system with optional GPS as well as semi-active laser guidance.