Using a M113 armoured vehicle as an IED Insurgents have used a variety of ways to “deliver” improvised explosive devices against targets. In Iraq, IEDs were sometimes hidden inside dead animals on the sides of roads. In Afghanistan they were strapped onto donkeys. And of course in both wars, IEDs could be outfitted in cars and motorcycles.

In Iraq, members of the Islamic State of Iraq and the Levant took things a step further. They outfitted a captured Iraq Army M113 armoured troop carrier as a rolling IED.

U.S. officers were pointing to that battlefield improvisation as an example of what might wait Iraqi forces when they are ready to take Mosul. WASHINGTON — After releasing several draft request for proposal (RFP) documents over the past year, on Tuesday the US Army finally released the final specs for the Armored Multi-Purpose Vehicle’s (AMPV’s) engineering and manufacturing development (EMD) phase.

Despite sequestration and the service’s need to cut billions of dollars from its budget in the coming years, the program appears to be soldiering on, with a solid requirement of 2,907 vehicles to be built over 13 years at roughly $1.8 million apiece.

In October, the service announced it intended to delay the start of the program by a year while raising developmental costs by several hundred million dollars in its quest to replace thousands of Vietnam War-era M113 tracked armored personnel carriers.

The new document says the Army plans to award a five-year EMD contract in May 2014 to one contractor who will manufacture 29 vehicles for government testing, followed by a three-year low-rate initial production (LRIP) contract beginning in 2020.

The document released Tuesday lowered that number slightly to $436 million.

Likewise, whereas the estimate for the LRIP order of 289 vehicles between 2018 and 2020 was initially pegged at $1.08 billion, the Tuesday RFP lists three options for the LRIP years totaling $1.2 billion, giving the program a $1.68 billion budget before full-rate production begins.

The Army requested $116 million in its fiscal 2014 budget for development activities for the AMPV, which Congress approved.

The LRIP order will go to only one winner, and BAE Systems and General Dynamics are vying for the final prize.

BAE is offering a variant of its turretless Bradley, while General Dynamics is offering either its wheeled double V-hull Stryker, or a newer tracked version of the Stryker.

The AMPV has taken on increasing importance in recent months as the Army appears to be moving away from continuing to develop the costly — and increasingly heavy — ground combat vehicle as its primary heavy infantry carrier of the future.

What that will mean for the AMPV, and how much of the program will survive the current budget environment, likely will not become clear for several months as the military services work through their five-year budget proposals and have them reviewed by the secretary of defense. The AMPV program is releasing a Full DRAFT Request for Proposal (RFP) for industry review and comment. This DRAFT RFP, including all associated Exhibits and Attachments, are DRAFT ONLY, Pre-decisional, and are anticipated to be changed before the final RFP is released.

All questions or comments must be submitted through the AMPV email address at usarmy.detroit.acc.mbx.ampv-program@mail.mil. Please note that ALL comments submitted in regard to the DRAFT RFP WILL NOT be released to the public and will be used for program planning purposes only. These responses MAY BE used to update the RFP if the Government determines it is in the program's best interest. All questions submitted will be posted, along with their responses, on the AMPV webpage for Industry to review.

PM AMPV remains committed to review all Industry's comments and address all questions and concerns related to the posted DRAFT RFP. Please be advised that comments and questions received close to the date of a final RFP release may not get answered or posted to the website. Due to uncertainty of a final RFP release date, the Government may lack sufficient time to respond, but will make every attempt to reconcile and post responses to submitted questions. Any previously submitted questions, which are not reconciled before a final RFP, may be resubmitted and answers will be posted until receipt of proposals.

-- *Questions to Industry (RFI Questions)
In addition to receiving industry feedback and comments based on the released DRAFT RFP and associated documents, the AMPV team would like industry feedback on specific sections within the DRAFT RFP. The following is a list of questions for industry to review and provide comment: Request for Information (RFI) Questions

-- *Please note that ALL responses to the RFI Questions WILL NOT be released to the public and will be used for program planning purposes only. These responses MAY BE used to update the RFP or Acquisition Strategy, if the Government determines it is in the program's best interest.

-- Industry Day
A second Industry Day is planned for April 23, 2013. The purpose of this event is to update industry on AMPV program requirements and provide an overview of the DRAFT RFP. Details regarding industry day, including how to register, can be found on the following link: 2013 AMPV Industry Day

Information on this webpage, including the referenced attachments below, marked as Controlled Unclassified Information (CUI) is subject to export control. See the following instructions for access to CUI, in addition to all Classified and FOUO information: (link).


Click here to reach the RFP page, listing all related documents, on the US Army TACOM website.


(EDITOR’S NOTE: The AMPV is thus described in the RFP:
“The Armored Multi-Purpose Vehicle (AMPV) is the proposed United States Army program for replacement of the M113 Family of Vehicles (FOV) to mitigate current and future capability gaps in force protection, mobility, reliability, and interoperability by mission role variant within the Heavy Brigade Combat Team (HBCT).
The AMPV will have multiple variants tailored to specific mission roles within HBCT. Mission roles are as follows: General Purpose, Medical Evacuation, Medical Treatment, Mortar Carrier, and Mission Command.
AMPV is a vehicle integration program. Existing Mission Equipment Packages (MEPs) will be transferred into the AMPV platforms where applicable.) 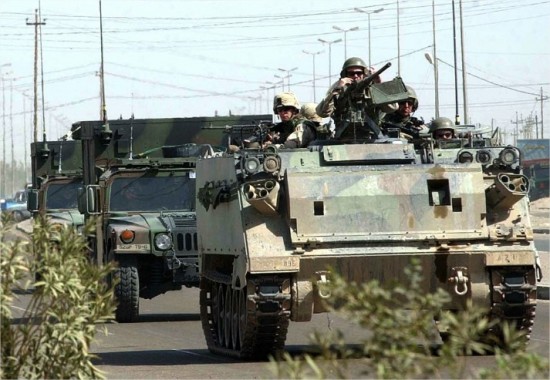 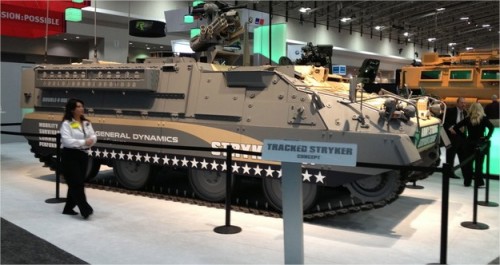 Canadian Army’s M113s Wind Up in Victoria, British Columbia to Be Destroyed

The Canadian Army’s M113 armoured personnel carrier fleet is being driven into oblivion.

Sharp-eyed Defence Watch readers in Calgary, Edmonton and Victoria, BC have all sent in reports about the M113s being shipped to a scrapyard in Victoria, B.C.  The vehicles are being shipped on flatbeds, two to a truck.

In Victoria they are being totally destroyed; no parts are being keep, the engines are being decimated, etc. The destruction is because the U.S. government is insisting on that. There are several hundred carriers to destroy (some estimates are as high as 500 or 600).

A number of M113s have been set aside for museums, for base displays, etc. DND tried to sell the carriers to other nations but had not much luck considering there are large numbers of the vehicles readily available.

Proposed sales of the M113s did not take off as Crown Assets and DND had hoped.

Some Defence Watch readers have suggested it might have been an idea to provide the carriers for free to some nations in the developing world that Canada has a military relationship with (there are a number of countries in Africa).

Other readers questioned why the carriers were stripped for parts in case they are needed for the TLAVs (upgraded M113s which were sent to Afghanistan and received excellent reviews about their performance).

As way of background, here is what I wrote about the TLAV on Defence Watch in July 2008:

The M113A3 TLAV or Tracked Light Armoured Vehicle was developed several years ago as part of the upgrade program for the Canadian Force’s M113A2 fleet. I’m told that although the TLAV is not seen as a frontline combat vehicle, it nonetheless is a robust and steady workhorse that can keep up to the Leopards and provide the needed protection for crews.

Jason Bobrowich, a former crew commander and armored gunnery instructor in the Canadian Forces on the Cougar and the Leopard C1, writes this about the history of the TLAV on an excellent and information-filled post on the Armorama website:

“A variety of upgrades were done to power pack, suspension, and weapon systems on the M113A2s to become the M113A3 variant. A total of nine M113A3 variants were developed for specific Combat Support roles. One variant is the M113A3 TLAV with the One Metre Turret. The most recognizable feature of this version of the TLAV is the addition of the One Metre Turret. The turrets came from the retired AVGP Grizzly 6×6 wheeled APCs. The turrets were further upgraded with 76 mm Wegmann multi-barrel grenade dischargers and add-on armour. The turrets are fitted with a .50 Calibre machine gun and a C6 7.62 mm machine gun. They are electrically or manually traversed and are fitted with an image intensification night sight.

In addition to the internal upgrades to the TLAV hull external modifications were also made. Add-on armour panels were added to the sides, front, and rear ramp. The trim vane was eliminated and a stowage bracket was added to the engine access hatch. Anti-slip surfaces were added to the hull top as well as an extended exhaust, new antenna mounts, anti-slip surfaces, and a hull top stowage box. The suspension was also upgraded with the Diehl track being replaced by the Soucy rubber band track system. The Soucy track is wider than the Diehl track, lighter, and far less work is needed to maintain it. The drive sprockets and tensioning idler wheels were also replaced with new versions designed for the Soucy track. The tracks are made of rubber, steel cable, and other compounds. The tracks dramatically reduce the noise and vibrations and increase the M113A3′s mobility.

A number of M113A3 TLAVs with the One Metre Turret are currently being used by the Canadian Forces in Afghanistan along with other M113A3 variants. The TLAVs provide convoy escorts and security for both command posts and Artillery batteries. While the Canadian LAV III has replaced the M113A2 as an Infantry carrier in the Canadian Forces the M113A3 TLAV and M113A3 variants will continue to serve as very important Combat Support AFVs on the front line. Shortly after arriving in Afghanistan the TLAVs began being fitted with add-on bar armour packages. This further increased the crew protection on the TLAV against RPG type weapons.”