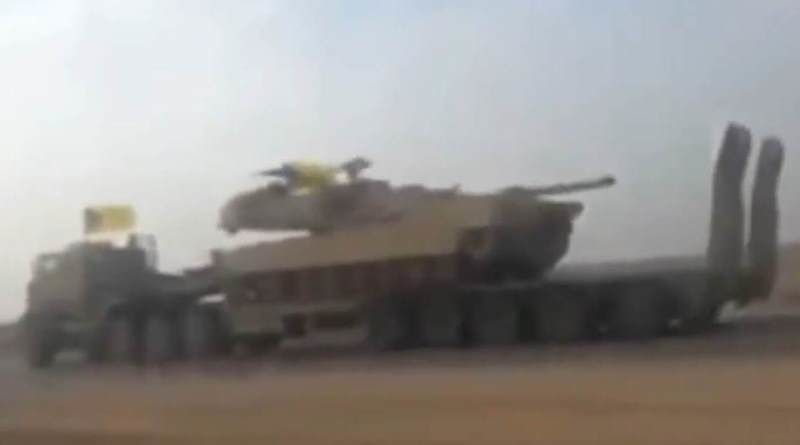 A video recently aired on YouTube shows an alarming situation happening in Iraq, where heavy equipment delivered by the U.S. To the Iraqi Army reaches extremist groups in the country – some are jihadists fighting against the government (ISIS and its supporters) and others are Iranian backed extremist groups presently supporting the Iraqi Forces.

The convo shown in this video shows a long group of vehicles, comprising mainly pickup trucks, but also various vehicles provided by the USA to the Iraqi Forces, including M1A1 main battle tanks, transported on standard US Army Heavy Equipment Transporter (HET), M113 Armored Personnel Carriers and M151, military trucks hacked with rocket launchers to become mobile rocket launchers. Unlike tanks shown by ISIS, that were damaged in battle, this equipment seems intact, and may have been taken by the Hezbollah from Iraqi storage of abandoned by military units.

According to The Long War Journal, Kata’ib Hezbollah, receives funding, training, logistics, guidance, and material support from the Iranian Qods Force, the external operations wing of the Iranian Revolutionary Guard Corps. The radical militia has joined the fight against the Islamic State in Iraq. In addition, other Iranian-supported Shia militias, such as Asaib al Haq, Badr Organization, and Muqtada al Sadr’s Promised Day Brigades have played a prominent role on the battlefield.

Despite this, the group was unofficially assisted by US airstrikes when Iraqi and Kurdish forces broke the siege of Amerli in Salahaddin province, although, according to US announcements, the call for fires were at “the request of the Government of Iraq” and “in support of an operation to deliver humanitarian assistance to address the humanitarian crisis and protect the civilians trapped in Amerli.

Lighting Up The Night