Naval Air: The MQ-47C Is Accepted, Rejected And Contested 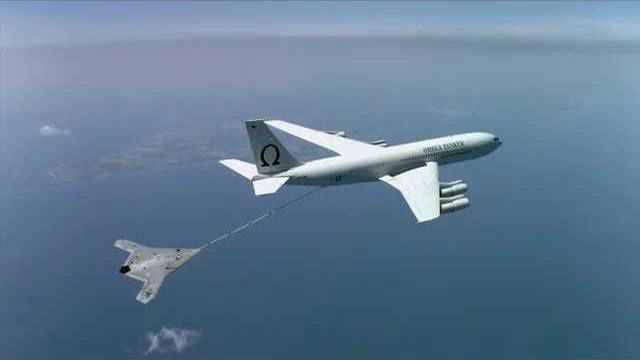 The U.S. Navy’s X-47B UCAS (unmanned combat air system) continues to break or make records. Thus in 2015 this included the world's first fully autonomous aerial refueling in April, performed with a KC-707 tanker. During the last few years this unmanned combat aircraft has successfully carried out numerous operations aboard aircraft carriers. These tests were often firsts for UCAS. Thus an X-47B made its first catapult launch from an aircraft carrier on May 14th 2013. That was followed by several touch and go landings on a carrier. The first carrier landing, as expected, followed soon after. Later in the year more flight tests further stressed the capabilities of the automatic landing system, especially in high speed and complex (different directions) winds. The autolanding systems passed all these tests. The X-47B was also the first UAV to land and be off the carrier deck in less than 90 seconds, just like manned aircraft. There were a lot of other tests to see how effectively and reliably the X-47B could operate on the carrier and hanger deck and do it alongside manned aircraft. All this is part of a long-term navy plan to introduce an UCAS replacement for the F-35 (which is soon to replace the F-18s) in the 2030s. But if the UCAS progress continues to be swift and the costs low (compared to manned aircraft), the F-35 could find its production run much reduced to make room for an UCAS.

While software controlled landing systems have been around for decades, landing on a moving air field (an aircraft carrier) is considerably more complex than the usual situation (landing on a stationary airfield). Dealing with carrier landings requires more powerful hardware and software aboard the aircraft. The navy expected some glitches and bugs and appears to be rapidly catching up to the reliability of commercial landing software (which has been used very successfully on UAVs) within months rather than decades.

Rather than begin development on the slightly larger X-47C, which was be the first naval UCAV to enter service, the navy changed that plan and is now seeking new designs for a UCLASS (unmanned carrier-launched airborne surveillance and strike) aircraft. There will be a competition by development aircraft in 2016. It’s likely, but not certain, that one of those 2016 competitors will be the X-47C.

All this comes after the navy rolled out the first X-47B in 2008. This was the first carrier-based combat UAV, with a wingspan of 20 meters (62 feet, and the outer 25 percent folds up to save space on the carrier) and stay in the air for up to twelve hours. The 20 ton X-47B weighs a little less than the 24 ton F-18A and has two internal bays holding two tons of smart bombs. It is a stealthy aircraft. As it exists right now the X-47B could be used for a lot of bombing missions, sort of a super-Reaper. The navy has been impressed with the U.S. Air Force success with the Predator and Reaper. But the propeller driven Reaper weighs only 4.7 tons. The much larger X-47B uses a F100-PW-220 engine, which is currently used in the F-16 and F-15.

The X-47C was expected to be closer to 30 tons and have a payload of over four tons. The X-47B was never mean to be the definitive carrier UCAV, but the navy hoped it would be good enough to show that unmanned aircraft could do the job. Normally, "X" class aircraft are just used as technology demonstrators. The X-47 program has been going on for so long, and has incorporated so much from UAVs already serving in combat that it was thought that the X-47 may end up eventually running recon and bombing missions as the MQ-47C. But in February 2015 the navy stated that the X-47B was too costly and insufficiently stealthy to become it's carrier UCAV, and the two prototypes will be turned into museum exhibits upon completion of all flight testing, extant and length of which is not ultimately decided yet.

The U.S. is far ahead of other nations in UCAS development, and this is energizing activity in Russia, Europe, and China to develop similar aircraft. A Chinese UCAS, called the Li Jian was photographed moving around an airfield under its own power back in early 2013, which is the sort of thing a new aircraft does before its first flight (which took place in November, 2013). Since 2011 the Li Jian has been photographed as a mock up, then a prototype, and now taxiing around and in flight. The Li Jian is similar in size and shape to the U.S. Navy X-47B.

It’s generally recognized that robotic combat aircraft are the future, even though many of the aviation commanders (all of them pilots) wish it were otherwise. Whoever gets there first (an UCAV that really works) will force everyone else to catch up, or end up the loser in their next war with someone equipped with UCASs. China may have just copied pictures of the X-47B, or done so with the help of data obtained by their decade long Internet espionage operation. Whatever the case, the Li Jian is not far behind the X-47B.

These aircraft are meant to operate like current armed UAVs or like cruise missiles (which go after targets under software, not remote, control). Enemy jamming can interfere with remote control and you have to be ready for that. This means pre-programmed orders to continue the mission (to put smart bombs on a specific target, the sort of attack cruise missiles have been carrying out for decades) or attempt that but turn around and return to base if certain conditions were not met (pre-programmed criteria of what is an acceptable target). Fighter (as opposed to bomber) UCASs can be programmed to take on enemy fighters (manned or not) with some remote control or completely under software control. This is the future and China wants to keep up.

The U.S. Navy has done the math and realized that they need UCASs on their carriers as soon as possible. The current plan is to get these aircraft into service by the end of the decade. But a growing number of navy leaders want to get the unmanned carrier aircraft into service sooner than that. The math problem that triggered all this is the realization that American carriers had to get within 800 kilometers of their target before launching bomber aircraft. Potential enemies increasingly have aircraft and missiles with a range greater than 800 kilometers. The X-47B UCAS has a range of 2,500 kilometers and is seen as the solution.

The Department of Defense leadership is backing the navy efforts and spurring the air force to catch up. At the moment, the air force is cutting orders for MQ-9s, which are used as a ground support aircraft, in addition to reconnaissance and surveillance, because American troops are being pulled out of Afghanistan, and it is believed Reaper would not be very useful against China, North Korea, or Iran. But, as the Navy is demonstrating, you can build UCASs that can carry more weapons, stay in the air longer, and hustle to where they are needed faster. The more the navy succeeds, the more the air force will pay attention and probably use a lot of the navy developed UAV hardware and software technology.