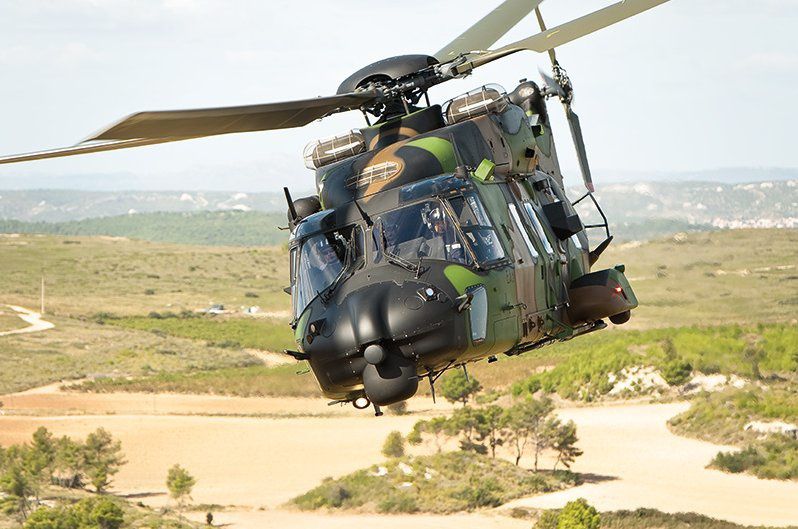 Carried out at an undisclosed location, the trials enabled the helicopter's maximum take-off weight to be uprated to 10.6t, while additional trials, which are planned for March 2014, will lead to the helicopter's clearance for shipboard missions.

The helicopter's initial operational capability (IOC) is planned for mid-2014, when four NH90s will be available for operations.

The French Army has to date taken delivery of three of the total 34 NH90 helicopters ordered by the French defence procurement agency from NH Industries in December 2008, along with an option for an additional 34 aircraft, to help replace the army's ageing SA 330 Puma helicopters fleet.

The helicopters are scheduled to be transferred along with their operational crews from the training and induction centre at Cannet des Maures to their new unit, the 1st Combat Helicopter Regiment based in Phalsbourg in eastern France, in December 2013.

Around 27 NH90 Nato frigate helicopters (NFH) were also ordered by the French Navy to replace its Lynx and Super Frelon helicopters, which perform anti-submarine and anti-surface warfare missions.

The helicopters have been ordered by other NH90 members, including Australia, Belgium, Greece, Norway, Oman, Sweden, Spain, Finland and Italy.

Eurocopter Boss 'Confident' France Will Come Through With NH90 Order

MARIGNANE, FRANCE — Outgoing Eurocopter Chief Executive Lutz Bertling said he is “pretty confident” France will come through with an order for more NH90 Army helicopters, but the number of units might be smaller than expected.

Bertling’s prediction came after the company warned the government that failing to buy a second batch of 34 helicopters would cost France €35 million (US $45 million) — and some 1,000 jobs.

“I’m pretty confident this contract will come,” Bertling said at a farewell press lunch at the company’s headquarters just outside Marseilles, in southern France, on April 17. “We’re facing risk without this order.”

On the Tiger attack helicopter, Eurocopter on April 19 formally handed over the first of 40 hélicoptère d’appui et destruction (close support) versions to the Direction Générale de l’Armement procurement office. The version is armed with the Hellfire missile.

And on April 25, an undisclosed technology demonstrator is due to make a first test flight at the government’s Istres test center.

Under the NH90 contract, the French Defense Ministry had until the end of March to firm up an option to order 34 NH90 tactical transport helicopters, or pay the cash penalty.

But the date went by without a decision, raising concern within Eurocopter, the helicopter division of EADS.

The programs were years late, with contract dates unachievable, but the company failed to tell the clients, he said. That meant a government minister would mislead the parliament by saying the helicopters would enter service in a year’s time, and then have to go back to correct the statement.

A lack of transparency added a “personal problem,” he said. It is important to tell the truth, which did not solve the problem but made mitigation of risk easier, he said.

The NH90 is of great operational significance, a senior analyst said.

The new helicopters have improved piloting and navigation capabilities, and their greater range means less refueling and therefore fewer logistical needs, he said.

The Mali campaign this year showed the French Army’s aging fleets of Pumas and Cougars need frequent refueling, with fuel tanks being flown or trucked in, he said. The age of the fleet also means high maintenance costs.

Looking back on his time as Eurocopter CEO, Bertling said the French and German decisions to deploy the Tiger and NH90 in Afghanistan were trigger events that changed the way the firm worked. For instance, Eurocopter would work on quality assurance and hand over aircraft to procurement officials who would duplicate the process.

The Afghanistan deployment brought the company and procurement offices “out of our silos” to work closely together to deliver at 100 percent quality, as the company and government officials knew the aircraft and crews would soon be flying in combat, Bertling said.

Bertling said he regrets waiting a couple of years before reorganizing the company around a stronger customer focus, sales support and an integrated global supply chain.

After the 2008 financial crisis, Bertling waited until the end of 2010 to early 2011 to commission independent studies from consultants Boston Consulting Group and Booz Allen Hamilton to see if Eurocopter had the right structure to do business in constrained markets. Those studies led to the current organization.

A small reduction from 34 would pose no problem, Bertling said, but a business needs a minimum number to make sense.

“It’s very simple,” Bertling said, adding that there is a need for the helicopter but the French government is deciding on defense spending, which will set priorities on requirements. The order would go ahead once budget decisions have been taken, he said.

Looking ahead, Bertling said he sees the need for optionally manned air systems, greater speed — as seen in the US Joint Multi-Role Helicopter program — and affordability.

On affordability, it is one thing for four-star generals to say they want equipment that delivers 80 percent of requirements, but down the command chain, the one-star officer still writes specifications for the 100 percent solution, Bertling said.

Dual civil and military use would boost affordability, he said. While attack helicopters would be exclusively military, lower specification civil aircraft could be fitted with mission systems, he said.

There are, however, basic design differences between a civil aircraft such as the EC175, which has a long cabin, and military needs. The military wants a wide cabin for door gunners, he said.

Bertling leaves Eurocopter at the end of April to become president and chief operating officer of Bombardier’s trains business, based in Berlin.

His successor at Eurocopter is Guillaume Faury.