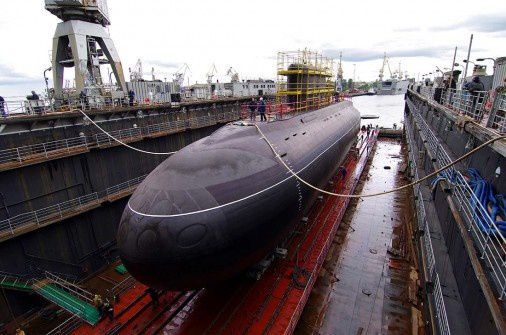 The third diesel-electric submarine (SSK) Project 636, built in St. Petersburg Admiralty Shipyards for Vietnamese Navy in late 2014 will be delivered at the point of bases in Cam Ranh Bay, according to Interfax-Military News Agency, citing a source in the Russian shipbuilding industry.

"Currently, the third boat export series is working out the program of ship crew practice customer. This - the second stage of the marine part of the training. The first successfully completed 1 to July 20 in the area of ​​the island of Hogland. During the first phase of the boat held submerged 57 hours, "- said the agency interlocutor.

According to him, 20 August boat will return to the factory, and then again after 10 days will be released into the sea. "In November, she will be transferred to the customer," - he said. The fourth boat series recently came to the factory sea trials.

According to the plan is the construction of the fifth and sixth corps. "Launching of the sixth boat series is scheduled for September next year," - said the agency interlocutor.

The first and second series of the Vietnamese boat HQ-182 "Hanoi" and HQ-183 "Ho Chi Minh City" in April became part of the 189th Brigade Navy submarine forces in Vietnam. Delivery to Kamran accomplished by the Dutch LASH.

Contract to supply Vietnam six diesel-electric submarines of Project 636 was signed in 2009 during the visit to Moscow by Prime Minister Nguyen Tan Dung. In addition to the construction of the submarines contract provides for the training of Vietnamese crews, as well as supply of necessary equipment and technical equipment.

Project 636 diesel-electric submarine is the third generation of submarines. These boats have a good modernization potential, allowing them to integrate new weapons, and in particular, anti-ship missile complex Club, significantly expanding the zone of destruction purposes. Due to the ultra-low noise in the West boats of this type are called "black hole".

The Varshavyanka-class (Project 636) is an improved version of the Kilo-class submarines and features advanced stealth technology, extended combat range and the ability to strike land, surface and underwater targets.

Vietnam in 2009 ordered six of the Russian-made submarines -- dubbed “black holes in the ocean” by the US Navy because they are nearly undetectable when submerged -- in a step seen as an effort to counterbalance China’s expanding maritime influence in the region.

According to the defense industry source, the first craft in the order is to be loaded on a stevedore barge on November 11 and towed to Vietnam, where it will be officially transferred to the country’s navy.

“The second vessel will be delivered in the beginning of next year, possibly in January, while the third will be also transferred in 2014,” the source said.

The contract, which also includes provision for the training of Vietnamese submarine crews in Russia, is reportedly worth $2 billion.

The submarines are being built at St. Petersburg’s Admiralty Shipyards. All six boats are due for delivery by 2016.

The source also said Thursday that three Varshavyanka-class submarines will be delivered by Admiralty Shipyards to Russia’s Black Sea Fleet next year.

Work on building the first sub, the Novorossiisk, began in August 2010, followed by Rostov-on-Don in November 2011 and Stary Oskol in August 2012.

The submarines, which feature 533-mm torpedo tubes and are armed with torpedoes, mines, and Kalibr 3M54 (NATO SS-N-27 Sizzler) cruise missiles, are mainly intended for anti-shipping and anti-submarine missions in relatively shallow waters.