Along with a team of industry suppliers, Sikorsky is developing two RAIDER™ prototypes to demonstrate the revolutionary new capabilities in improved maneuverability and flight speed. The RAIDER is a rigid coaxial rotor prototype aircraft ideally suited for armed reconnaissance and a spectrum of special operations missions. 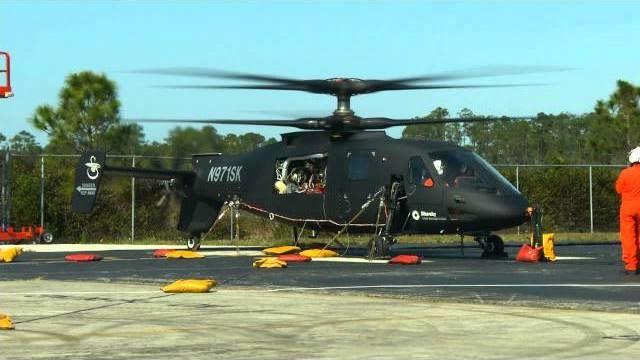 February 4, 2015 marks the start of bladed ground testing, a major milestone, for the S-97 RAIDER™ program. During the ground runs phase, the S-97 RAIDER team is testing the first of two aircraft prototypes as a completed system for the first time. The team will perform initial ground tests with the aircraft tied down and will focus on verifying correct operation of the propulsion system, drive train, rotor control system and pilot-vehicle interface.

US manufacturer Sikorsky Aircraft has unveiled the first prototype of its S-97 Raider high-speed attack helicopter. Launched in October 2010, the S-97 Raider programme will now move towards the flight-testing phase.

The Raider incorporates Sikorsky's X2 coaxial rotor design, plus a rear-mounted propeller. Combined, these will help give it a top speed of 253 miles per hour - a figure nearly twice that achieved by the attack helicopters in present day military service - plus a range of 354 miles.

The US Army's OH-58D Kiowa Warrior helicopter - which the S-97 Raider could end up replacing - has in contrast a top speed of 149 miles per hour and a 161 mile range. It's Sikorsky's intention to put the Raider forward as a Kiowa Warrior replacement, 'based on the Army's future operational and financial priorities, and for the special operations platform', the firm explains.

In fact, the type was first offered as a contender in the US Army's AAS (Armed Aerial Scout) programme but this was suspended last year as a result of sequestration and it's not yet known whether or not it will resume.

Constructed from composite materials, the Sikorsky S-97 is multi-mission configured - optimising it for both the light assault and aerial scout roles - and it can accommodate a maximum of six armed forces personnel, in addition to two pilots seated side-by-side.

Drawing on Sikorsky's knowledge gleaned from its X2 concept demonstrator programme, the S-97 was announced, designed and constructed in just four years. Combining the qualities of both a helicopter and a fixed-wing aircraft, the Raider could be a game-changer if, ultimately, it enters service.

"Today, Sikorsky unveiled the next generation of military rotorcraft, with capabilities and performance never seen before in our industry", explains Sikorsky President Mick Maurer in the firm's S-97 Raider unveiling press release. He continues: "Just four years ago, we announced plans to build the S-97 Raider and teamed with some of the best companies in the industry, understanding the need to ensure aircraft development would not falter as government defense budgets shrank in response to economic pressures.

"Sikorsky is proud of its leadership in this area, and of the leadership the S-97 Raider represents among the world's military rotorcraft."