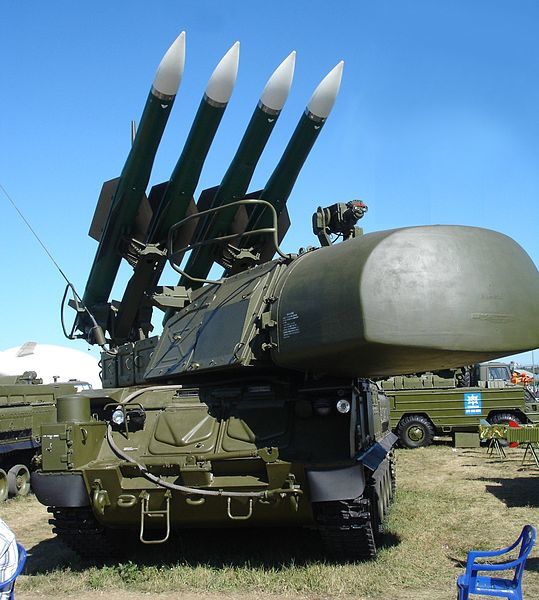 Egyptian air defense forces are expanding their arsenal by spending over a billion dollars on additional Russian Buk short range and S-300V king range anti-missile systems. These are of Buk and S-300 systems Egypt already has. Egypt has been using Russian anti-aircraft missile systems since the 1970s. In addition Egypt has American Hawk and Patriot systems. This includes some of the anti-missile missiles for their Patriot systems. But the 70,000 personnel in the Egyptian Air Defense Command primarily operate Russian equipment.

The latest version of Buk is the Buk M3. This version has a longer range (75 kilometers compared to 50 for the M2) and improvements in the guidance system and overall reliability. Development of the Buk M2, a radical redesign of the 1960s era SA-6, was completed in 1988, near the end of the Cold War and disintegration of the Soviet Union. This delayed its introduction. Russia was not able to start production until after 2002. When NATO discovered the Buk M2 they called it the SA-11.

Buk began development in the 1970s because of the success of SAM-6 system in the 1973 Arab-Israeli war. Egyptian SA-6 systems were effective against Israeli warplanes, one of the rare successes of Russian air defense weapons against Western equipment. The Buk M1 entered service in the 1980s while work got underway for the even more advanced M2 and M2E. These were the ones delayed by financial problems in the 1980s. The M2 missiles weighed 720 kg (1,587 pounds) each and have a max range of 50 kilometers. This was followed by a lighter (581 kg) version with the same range. The missiles were carried and launched from a tracked vehicle that held four missiles. Another vehicle has the target acquisition radar which has a range of over 150 kilometers. Versions of the Buk were developed for use on ships.

As successful as the SA-6 was in 1973 and U.S. and Israel quickly developed electronic countermeasures. Russia responded by improving Buk but was never able to repeat the success of 1973, which was largely the result of Israel underestimating the SA-6 and the ability of Egyptian operators. Israel has not repeated that error since then and it was a wakeup call to the United States and other NATO countries as well.

While the S-300’s may be Cold War era weapons, their fire control and communications systems have been upgraded. Each S-300 battery consists of 4-8 launcher vehicles (each with two missiles, plus two reloads) plus radar vehicles and a command vehicle. The original S-300 was known to NATO, during the Cold War, as the SA-10. This system entered service in the late 1970s and was upgraded several times since then. One major upgrade came to be called the SA-12 and it entered service in the late 1980s. Finally, there was the SA-21, which was so different from the original S-300 that it was given a new name by the Russians: the S-400. These systems began entering service, slowly, in 2007. The S-300V/SA-12 missiles had a range of 75 kilometers and were considered somewhat similar to the American Patriot systems. Later models of the S-300V had some capability to shoot down short range ballistic missiles. The SA-12 missiles were carried in canisters (either four or two per launcher vehicle). Each launcher vehicle also contains a guidance radar.