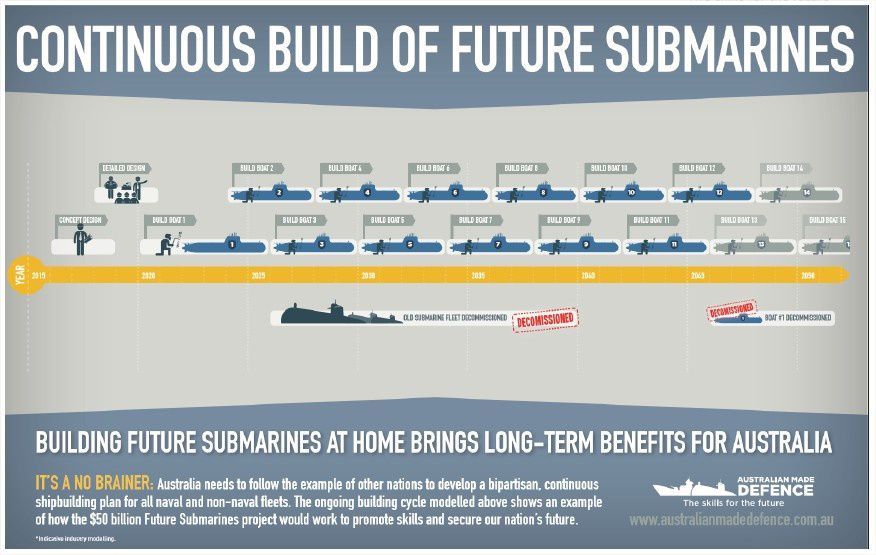 New Australian submarines could be colossal

This month, the full independent report on the sustainment of Australia’s Collins-class submarines, otherwise known as project SEA 1000, will be released. The plan for Australia’s Royal Navy is to replace its six Collins-class boats with 12 new vessels to begin entering the waves by 2025.

Rumours abound that the nation’s Federal Cabinet will settle on what is in essence an advanced Collins-class, a locally built sub with more firepower, stealth and overall speed. The capability outline includes recovery of covert ops forces while submerged and land-attack cruise missiles.

The multi-billion contract to replace the existing 30 year lifespan boats are staying in the drawer until 2015, but assurances have reportedly been made to keep production within Australia. Ministers will undoubtedly be keen to avoid the controversy and accusations of bias that stained the acquisition of the last submarine fleet.

The widely held belief is that Australia requires advanced systems that match the type of platforms being deployed and cooked up by more powerful allied nations. Considering the immediate threats to Australia’s interests, as well as potential socio-political problems facing the decades ahead, and of course the nation’s tremendous coastal border, there seems enough of a case for solid investment into a muscular and highly capable fleet.

The most necessary of capabilities includes longevity and speed, as response to situations within Asian waters could call for Australia to be first-responders to the scene, and then to patrol for lengthy periods to enforce its presence as a deterrent.

Current Collins-class vessels boast a sustained submerged speed of 21 knots at 32.6 nautical miles and a surface speed of 10.5 knots at 11,000 nautical miles. In other words, a surfaced journey between HMAS Stirling and the centre of the Indian Ocean would take just under twelve days. The jury is still out on whether Air Independent Propulsion (AIP) will be needed to reduce snouting, or indeed even possible within the allocated timeframe.

The Collins-class can also endure for 70 days and has the capacity of 22 torpedoes, along with an upgrade to the modified Raytheon CCS Mk2 (AN/BYG-1) combat system as also favoured by the US Virginia-class submarines. Obviously however, the full specs of the current Australian fleet will no longer be enough for the emerging battlespace.

So what’s the threat?

In the immediate ocean landscape, China is arguably the biggest concern to Australia, considering its geographical position. There remains the ongoing risk of potential unrest being stirred in Taiwan if the pro-independence Democratic Progressive Party, the current opposition, manages to take office and naturally begins pushing harder for a removal of Chinese governance. Australia would be expected to respond to the defence of the island if China ever took action on its threat of sending troops to quell any movement against its interests.

Australia also stands at the doorstep of the South China Sea, the waters of which are disputed by a great many nations, including the 30,000-plus Spratly Islands occupied by various militaries today.

North Korea is also a concern with the recent shuffle at the top of the leadership deck, and potential for spats and naval demonstrations between the Koreas is again in the red. On a positive note, Burma is showing signs that it is re-joining the discussion table, human rights record considered, so may no longer prove to be as tight a noose as it has been in recent years.

What will Australia have learnt?

Australia will be paying acute attention to the decisions being made elsewhere in the world and, more importantly, the ramifications and problems with those agreed projects. The well-documented suffering of Canada’s submarine fleet since its purchase of retired UK diesel-electric Cold War era boats, will have no doubt sent a cold shiver down the spine of defence minister Stephen Smith.

It can also learn just as much from the UK’s spending on Vanguard and Astute class vessels, proving that higher investment does not by any means equate to a smooth road ahead, as demonstrated through a series of mechanical failures.

Most importantly, attention will be paid to the recent developments in the surrounding area. As reported, India is also campaigning to complete its home-based submarine programme, but has wisely opted to work on the frame of French Scorpene vessels while also augmenting its capabilities through its leasing of a nuclear-powered sub from Russia. Australia ruled out acquisition of the Scorpene in 2009 based on its list of broader operational requirements.

Further out, other Asian-Pacific nations are leaning towards small diesel-electric solutions, offering little in the way of immediate protection for larger-scale engagements – a gap Australia is looking to fill.

What move should it make?

While hardly a decision to be made lightly, the biggest factor will always be the dollar, but at the risk of playing Armchair Admiral, buying cheap may not be the wise move.

If Australia is seduced by its low-cost options, it could end up plugging a leak with one hand while drilling a hole with the other, effectively wasting the entire expense on a capability that is outdated within 10 years.

Based on the threat already outlined, most experts are confident that this will not be the route taken. However, the fact that the country’s current Collins-class vessels are the most expensive subs on Earth to keep in shape – over £70 million each per annum – any decision to spend more rather than less will not be seen as popular among the taxpaying public, particularly as cost overruns and project delays are almost inevitable on such a complex undertaking (it is worth noting that all of Australia’s active submarines were delayed by at least a year and half). Defence ministers will need the fortitude of a steel hull to announce any ruling.

As with its armoured vehicle decisions, Australia has recently faced internal debate over defence programmes hinging themselves on indigenous industry, with the public keen to keep its own economy alive on the drip of manufacturing. Despite this, if considering the long-term benefit, now is not the time for any nation to be thinking of having its own, unsupported platform, if such a thing can be helped.

Interoperable technology, external suppliers, and the knowledge well of allied forces could lengthen the life-span of new assets at a time when joint force training and joint systems management are seen as a progressive approach. British aircraft carriers providing a platform for US and French jets is just one example of how international navies are finding ways to press and sweeten their lemons.

Sticking with the subject of international partnerships, one option mooted is to buy the aforementioned Virginia-class boats from the US Navy, ensuring that Australia’s underwater capabilities match or exceed anything that other global powers have to offer.

Outright purchase of the American vessels – with bells and whistles – would equate to £1.6bn per unit, but the security of MRO, as well as reaffirmed bonds between the two allies could be worth the high figure.

Whatever the decision, Australia will not only have to do its best in predicting the technology required to fight tomorrow’s battles, but also in maintaining the balance within its own ranks to ensure any new platforms, homegrown or otherwise, are fully equipped with a dedicated crew and an ability to repair and replenish its systems throughout the coming years.

On its side is the fact that, unlike some of her partners, Australia has not allowed its submarine shipbuilding knowledge to decay, and instead possesses a strong team of project managers, analysts and engineers ready to take this challenge into deep waters.

It is this pedigree that increases the likelihood of Sea 1000 becoming a future success story.