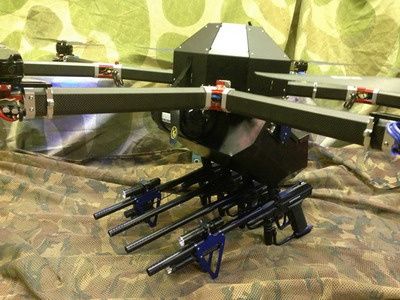 Hennie Kieser, Director of Desert Wolf, told defenceWeb that the non-lethal grenades are being supplied by a company in South America and will be available in a number of different formats, including smoke, flash-bang, tear gas etc. Up to 48 grenades can be carried by the upgraded Skunk GL UAV.

The grenades will be dropped over crowds and descend via parachute, minimising collateral damage on the ground and allowing the smoke to spread from above.

The South American company commissioned development of the grenade version of the Skunk, which will be marketed jointly by both it and Desert Wolf.

Kieser said he expected test flights and customer acceptance of the grenade version by the end of December. Photos and videos of the Skunk GL will be made available in the next 6-8 weeks.

Desert Wolf is currently manufacturing its Skunk UAV in Europe. This version is fitted with four paintball markers able to fire a variety of different rounds, from hard plastic to pepper spray. Manufacturing is underway for seven different customers, which have ordered some 400 airframes. Two batches of aircraft have already been shipped and pilots trained. These seven orders should be completed by year-end, Kieser said.

The skunk riot control UAV is being developed into a whole family that can be used for a variety of duties, such as search and rescue, surveillance, LIDAR scanning and lifeguard.

The Skunk multirotor, armed with four paintball markers, cameras and a loudhailer, was unveiled at the IFSEC security exhibition in Johannesburg in May last year, where it generated a considerable amount of interest both locally and abroad.