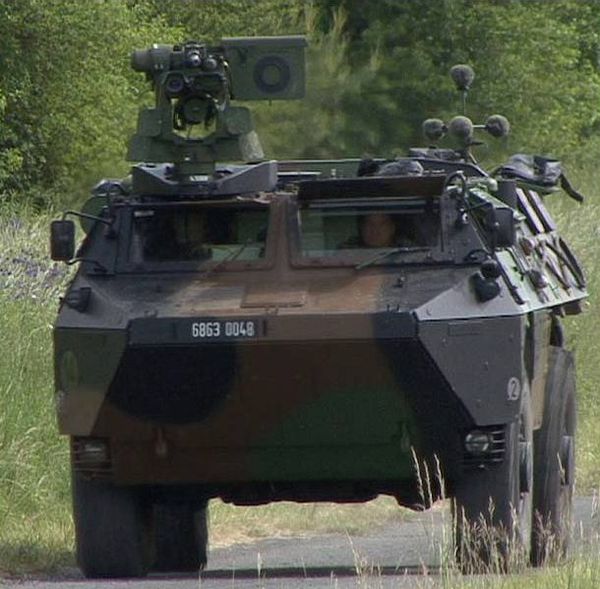 The French Army will equip 80 of its VAB wheeled vehicles in Afghanistan with a Kongsberg weapon station and a SLATE ground shot detector.

The SLATE system consists of a PILARw acoustic antenna for detecting gunshots, produced by 01dB-Metravib, which is connected to the Kongsberg TOP 12.7 (Protector M151) remote control weapon system and an interface for the crew.

When integrated into the VAB, this assembly allows very fast response times against sniper type of attack. As soon as a gunshot is detected, the VAB’s crew can decide to cue the turret automatically in the direction of the danger. The target can be identified and fire returned immediately.

New functionalities have been developed in partnership with the DGA and the end-users (French Army Technical Department, STAT) to enhance the protection of troops: the sensitivity of SLATE allows the threat level to be determined by indicating whether the weapon used is small or medium caliber. At the same time, the SLATE system stores the geographical location of the attacking shooters in memory, even after the VAB has moved.

The VAB can therefore move into cover when engaged. Thanks to the added reach provided by the armament of the TOP 12.7 weapon station (a 12.7 mm machine gun or a 40 mm grenade launcher), the crew can move away from the threat while retaining the option of neutralizing targets from a safe distance.

Ultimately, the SLATE system could be connected to information and command systems to improve the sharing of information gathered at tactical level.

Renault Trucks Defense, a reference manufacturer for the terrestrial armed forces, designs and develops a full range of armoured vehicles, with the SHERPA. Legacy supplier to the French Army, with more than 4,000 VAB armoured personnel carriers in service, Renault Trucks Defense can claim more than 65 customer countries across the world. Employing 600 people in France, RTD's 2010 revenues exceeded 300 million euros. Armoured vehicles represent more than 60% of its activity, but it also has a truck offering geared to a very full range of military uses. Renault Trucks Defense participates in programmes with Nexter, such as the Caesar artillery system and the VBCI infantry fighting armoured vehicle. It holds several brand names across the world, including ACMAT.

Kongsberg Protech Systems is the world's leading supplier of Remote Weapon Stations providing flexible solutions that meet our customer's specific requirements. Through world class innovation, program execution and customer understanding, we aim to provide high tech systems for enhanced situational awareness and protection of personnel and property in high-risk areas. As of October 2010 the Protector has been chosen by 17 nations and Kongsberg continues to be the world’s leading provider of Remote Weapon Stations.

01dB-Metravib has a global “products and solutions” offer in acoustics and vibrations: hardware production, software publishing, engineering, audits, services, research, and training. Dedicated to the Armed and Police Forces, 01dB-Metravib Defense and Security Division has designed a complete range of products for threat detection and localisation, including gunshot and RPs named PILARw. PILARw is a combat proven solution used by many countries all around the world and is already deployed in almost every ISAF Force in Afghanistan.